The Michigan State Trunkline Highway System is made up of all the s designated as Interstates, U.S. Highways and State Highways in the of . The system is maintained by the and comprises convert|9720.8|mi|km|2|lk=on of trunklines in all 83 counties of Michigan on both the Upper and Lower peninsulas, linked by the . The system ranges in size from the unsigned BS I-375 at convert|0.167|mi|km|3 and signed M-212 at convert|0.732|mi|km|3 to I-75 at convert|395.40|mi|km|2. Some trunklines in Michigan are maintained by MDOT but bear no signage along the route to indicate this. These unsigned trunklines are mostly segments of former highway designations that have been moved or had the designations . These segments remain under state control until the appropriate city or county accepts jurisdiction of the roadway from the state.

The M in the state highway numbers is an integral part of the designation and included on the reassurance marker shields posted along the side of the highway. Michigan highways are properly referred to using the M and never as "State Route 28" or "State Highway 66". Michigan is one of only two states that does this, the other one being Kansas. This usage dates from 1918, when Michigan's state trunklines were first signed in the field. The state highway route marker is a diamond with a block letter "M" at the top, similar to the "M" worn by athletic teams at the .

Although "M-nn" outside of Michigan could refer to other state, provincial, local, or national highways, local usage in those areas does not mimic the Michigan usage in most cases. In the United Kingdom, "M" refers to s, analogous to freeways in the United States, whereas "M-nn" designations in Michigan simply signify state trunklines in general and may exist on any type of highway. "M-nn" trunklines are designated along eight-lane freeways in urban areas, four-lane rural freeways and expressways, principal arterial highways, two-lane highways in far-flung rural areas, and even M-185, a non-motorized road restricted to bicycles, horse-drawn carriages and pedestrians.

The highest numbers used for highway designations include M-553 in the UP and I-696 running along the northern Detroit suburbs. The lowest numbers in use are M-1 along Woodward Avenue in Detroit and US 2 across the UP. Most M-numbered trunkline designations are lower than the low 200s, but some have been designated in the low 300s. MDOT has not assigned a designation outside the Interstate System in the 400s at this time. No discernible pattern is to be inferred in Michigan's numbering system.

Unlike other states, there are no formal rules prohibiting the usage of the same number under different systems. Motorists driving Michigan's highways will encounter both I-75 and M-75 as well as both US 8 and M-8. Many of the U.S. Highways had their numbers duplicated with state trunklines when the U.S. Highway system was created in 1926. The coming of the in the late-1950s further illustrated this with each mainline Interstate designation having a similar, but unrelated "M-numbered" state trunkline designation elsewhere in the state.

Many U.S. Highways in Michigan have left an M-numbered highway with the same number as a relic of their existence. As an example, M-27 runs along a portion of former US 27. In addition, two occurrences of an original "M-numbered" state route which became U.S. Highways with the same route designation existed: all of M-16 became US-16 and most of M-10 from Detroit to Saginaw was assumed into the route of US 10 in 1926. In fact each iteration of M-10 has existed along a former or future alignment of US 10, at least in part.

There were also some examples of "M-numbered" state highways which once existed as extensions of US Highways. M-25 was originally an extension of US 25 when US 25 went all the way to Michigan, and there was once an M-112 that served as an alternate routing for US 112 (both have since been changed, to I-94 and US 12 respectively).

There are four systems of highways maintained by MDOT as part of the state trunkline system. In addition there are systems of roads maintained by the federal government and counties. There is considerable overlap as designations from different systems share the same stretch of pavement in concurrencies. I-75 and US 23 share around 75 miles of freeway alignment between Flint and Standish. BUS US 131 in Big Rapids is routed long a portion of M-20 on Perry Street to connect back to the US 131 freeway.

State trunkline highways not a part of the of the Interstate or US highway systems are numbered with the M- prefix and carry the diamond route marker.

Another important part of the state trunkline system is the bannered highways. These highway designations are distinguished by the "banner plate" on top of the normal highway marker indicating them as business or connector routes of the system. Business loops and spurs of the Interstate Highway System use a special green version of the standard Interstate marker which places the word "Business" at the top where "Interstate" appears normally. These business loops and spurs connect downtown districts to the main highways after realignments and bypasses have routed the main highway out of the downtown area. Other highways are the connector routes which as the name suggests, connect two highways together. Most of these connectors are unsigned. 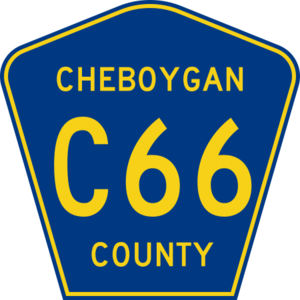 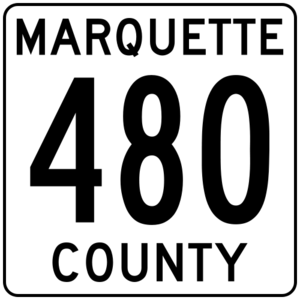 There exists a parallel system of county-designated highways in Michigan with numbers assigned in a grid system by MDOT. These highways, while signed on the trunklines and shown on the official MDOT map are maintained by the various counties. They were started in 1970 as a supplement to the main trunkline system. They carry a letter-number combination and used the national standard pentagon-shaped marker in blue and yellow. Other county systems are designated and maintained in each of the 83 counties and practices vary between using the pentagon marker to older square markers in black and white.

The Forest service maintains s providing access to the National Forests in the state. A handful of these highways exist in Michigan. In addition to these, Michigan participates in the program, signing these tours along the state-maintained highway closest to Michigan's shorelines.

The history of the highway system in Michigan dates back to the old Native-American trails that criss-crossed the state. These trails were pathways no wider than approximately 12–18 inches (30–40 cm) permitting single-file traffic. Many of the modern highways in the state follow the path of these old trails, including the Great Trail from Fort Pitt to Fort Detroit which is now US 24 from Detroit to . This trail connected with Braddock's Road which lead to the Atlantic Coast.

The Michigan Territory was established in 1805, and the first roads districts were established by the territorial governor. These roads were primarily built to serve the agricultural needs of the farming population of the time. These roads proved inadequate to the needs of the military during the . Territorial Governor Lewis Cass lobbied the federal government for road construction funding to bolster defensive needs as well as aid in settlement of the territory. Military roads debuted in 1816 with the construction of the Detroit–Fort Meigs Road to Toledo as a response to transportation needs. More roads were built with Congressional appropriations in the 1820s and 1830s connection Detroit to Port Huron, Saginaw, Grand Rapids and Chicago.

Townships were given authority to construct roads under the supervision of county commissioners in 1817. This supervision was difficult since in one case, one county covered all of the Upper Peninsula and several of today's counties in the Lower Peninsula. Direct supervision over construction was granted to the townships in 1827, and federal involvement in road building ended with the 1837 granting of statehood. Private construction companies built plank roads starting in 1844 to fill the void in long-distance road construction left by the departure of the federal government. The plank road companies had to be chartered by the state and build their roads to a set of minimum specifications. These specifications included convert|16|ft|m|0 in width, half of that was to be convert|3|in|cm|0|adj=on planks. The companies were permitted to charge one cent/mile to one-horse vehicles and two cents/mile for two-horse carriages and every score of cattle. These companies could not support the maintenance needs of the roads from the tolls charged. Even remarked, "The road could not have been bad if some unconscionable scoundrel had not now and then dropped a plank across it," after a trip to Grand Rapids.

Townships continued to maintain and build local roads using the "statute labor system". Able-bodied men residing in a local road district were expected to pay his road taxes by performing 30 days of labor on the roads in his district. If he was unable to work off the tax, a rate of 62.5 cents/day was assessed. This road was was performed under the guidance of the township road overseer, a separate elected township official, according to the wishes of his constituents, often without any county-level planning or coordination. Often the "improved roads" were in worse condition than unimproved roads due to the amateur nature of the maintenance.

An early form of federal aid contributed to the road network in the state starting in 1959. Congress granted certain forest and swamp lands to the state in 1850. A stipulation on the grant stated that the proceeds from the lands would be used to reclaim them for use. The established several roads to be built by contractors, paid with the proceeds from the sale of the land adjoining the roads, or with land itself. Around convert|5700|mi|km|sigfig=2 of roads were built using this plan until the supply of land was exhausted.

The tax system was partially reformed in 1881, allowing for direct payment of road taxes instead of relying totally on the statute-labor system. The first road district larger than the township level was created in Bay County in 1883 under Public Act 278. This roads district encompassed eight township and provided for better coordination and planning of road construction. Other county systems were created in 1893 with passage of legislation which allowed other counties to follow the lead of Bay County.

The first state road agency, the Michigan State Highway Department was created on July 1, 1905. At first the department administered rewards to the counties and townships for building roads to state minimum specifications. In 1905, there were convert|68000|mi|km|sigfig=2 of roads in Michigan. Of these roads, only convert|7700|mi|km|sigfig=2 were improved with gravel and convert|245|mi|km|sigfig=3 were . The state's statute labor system was abolished in 1907. Instead a property tax system was instituted with the funding only for permanent improvements, not maintenance.

Passage of the "State Trunkline Act" in 1913 provided for convert|3000|mi|km|0 of roadways in a state-financed system.

While Michigan was the second jurisdiction to post route designations along its state trunkline highway system in 1919,

The 1932 McNitt act consolidated all of the township-controlled roads into 83 county road commissions.

Act 51 of 1951 amended and clarified the current system of jurisdiction over roads in the state. The existing tri-level system was maintained, splitting road jurisdiction between the state, counties and cities, as well as subdivided each level into several classifications. Further legislation redefined the exact distribution, but Act 51 set up a system to distribute road funding from gas taxes from a single funding source, currently the Michigan Transportation Fund.