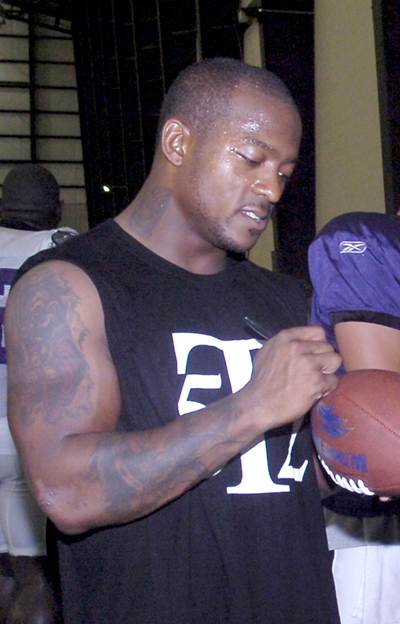 In 2002, McGahee, along with Ken Dorsey, Andre Johnson, and others led Miami to an undefeated regular season and a #1 ranking, which included a trip to the National Championship game against second ranked . That year, he rushed for 1,753 yards and 28 . He was also a finalist for the , given to the nation's top player, finishing fourth in the voting (660 votes). Teammate Ken Dorsey finshed 5th behind McGahee 643 votes.

In the early part of the fourth quarter during the National Championship Game, McGahee suffered an injury after catching a screen pass from Dorsey. He was immediately hit by Buckeye , causing an tear in his left . Prior to getting hurt, he had rushed for 67 yards and a , as Miami would lose the game in double-overtime, 31&ndash;24. This injury required several surgeries and extensive rehabilitation before he would be able to play again. At the season's end, McGahee announced he would not collect on a 2.5 million dollar insurance policy he had taken out before the Championship game, and therefore would enter the .

He majored in criminology.

Prior to his knee injury in the , McGahee was considered "a cinch top-five pick." [ [http://query.nytimes.com/gst/fullpage.html?res=9F0CE6DF113AF931A15757C0A9659C8B63&n=Top/Reference/Times%20Topics/People/M/McGahee,%20Willis "NYTimes.com: McGahee Hopes to Allay Concerns Before Draft"] ] Because McGahee's knee injury was still a major concern to professional scouts, the drafted McGahee as the 23rd overall selection of the . McGahee was only drafted in the 1st round due to the lobbying of his agent, , who campaigned on the fact that McGahee would be healed and ready to suit up for the following season. [ [http://findarticles.com/p/articles/mi_qn4155/is_20030729/ai_n12512208 "Agent says RB McGahee 'ready to go'"] ]

McGahee was still recuperating at the time, and eventually made his first professional debut during week six of the . He became the team’s starting running back during the season, replacing , who later left to play for the . During the season, McGahee rushed for over 1,100 yards, and scored thirteen touchdowns, the fourth most in the league. He rushed for a career high 1,200 yards the following season, but scored fewer touchdowns. In 2006, McGahee did not perform as well in comparison with previous seasons, rushing for nearly 1000 yards with six touchdowns. McGahee also ran into several health concerns during the season, including ailments in his , , and [ [http://bills.scout.com/2/601507.html "Scout.com: McGahee The Key To Bills Attack"] ] . McGahee has had noticeable stamina problems throughout his NFL career, evident in games in which he would receive many carries or when he rushes for a large amount of yards. McGahee has trouble operating as a feature back by himself because of his lack of endurance. [ [http://www.sportsbooks.com/news/sports_betting/249426.html "McGahee battles through illness"] ]

Following the seasons’ conclusion, the Bills traded him to the for third and seventh round picks in the , and a third round pick in the [ [http://sports.espn.go.com/nfl/news/story?id=2791831 "ESPN.com: McGahee traded to Ravens, signs long-term deal] ] .

Before being traded by Buffalo, McGahee made some harsh public comments about the city, and said he would like to see the franchise move to Toronto. These remarks contributed to his trade to the Baltimore Ravens. [ [http://torontosun.com/Sports/Football/2007/01/11/3299449-sun.html?tbd3299449-sun.html "Toronto Sun: What was Willis talkin' about?"] ] Following the trade, McGahee continued to stir bad feelings when he bashed the city of Buffalo in an interview with the . He said, "Coming from Miami, I was used to partying, going out, just having something to do every night. Restaurants, whatever. Going to Buffalo, it was like hitting a brick wall. Like, 'Damn!' Can't go out, can't do nothing. There's an , a , and they just got a . They got that, and I'm like, 'What the?' And, you know, the women ..." [ [http://www.wgrz.com/news/news_article.aspx?storyid=46572&provider=top "Parting Shots: McGahee Bashes Buffalo"] ]