Olympic Park Stadium is a multi-purpose outdoor stadium located on Olympic Boulevard in inner Melbourne. The stadium was built as an athletics training venue for the 1956 Olympics, a short distance from the MCG, which served as the Olympic Stadium.[1] The stadium currently plays host to athletics, having previously been the home of rugby league side, Melbourne Storm and the A-League team, Melbourne Victory.

Olympic Park Stadium is located in Olympic Park, which is part of the Melbourne Sports and Entertainment Precinct.

The stadium is one of the largest in Victoria primarily suited to rectangular configuration, making it ideal for hosting rugby league, rugby union, soccer and gridiron. The larger Etihad Stadium and Melbourne Cricket Ground also support rectangular configuration, but with less ideal viewing conditions. The larger 30,050 seat rectangular stadium (sponsored name AAMI Park) adjacent to Olympic Park Stadium was completed in May 2010.

Until 2009, the stadium was home of the (NRL) team, the Melbourne Storm. It is currently host to athletics meetings conducted by Athletics Victoria. It served as the home of Melbourne Victory (A-League) home games for two seasons (2005–2007).

Australian athletes have competed on the track for over fifty years and the venue has hosted twelve National Championships.[3]

Thirteen world records in athletics have been established at the stadium with Pole vaulter Emma George setting four between 1995 and 1998.[4]

Australian middle distance star John Landy featured in a memorable race at the 1956 National Championships, where he stopped during the Mile championship to assist the fallen junior champion, Ron Clarke. Landy's actions, in front of a 22,000 strong crowd[5] have been described as 'the finest sporting moment in the history of sport'.[6] Landy went on to win the event with many commentators believing that the stop had cost him the world record.

A photograph of the fall was named the 'Best Australian Sporting Photo of the Twentieth Century'[6] while Landy's conduct was named by the Sport Australia Hall of Fame as the nation's finest sporting moment of the 20th Century.[7]

The track is host to the most significant athletics meeting in Australia each year, the Athletics Grand Prix Series, Melbourne, meet (previously the Telstra A-Series meet).[8]

Olympic Park was the first[1] stadium in Australia to be recognised officially by FIFA as a soccer ground. From the mid 1950s onward the venue was considered to be the unofficial home of soccer in Victoria[citation needed]. It regularly hosted important games of the Victorian State League, including Dockerty Cup finals[9] and games by overseas touring teams.[10] The stadium also held FIFA World Cup qualification matches,[11] 1993 FIFA World Youth Championship matches,[12] and group matches of the 1956 Olympics football competition.[13][14]

As well as hosting several National Soccer League Grand Finals,[16][17] various soccer clubs used the venue as a permanent or temporary home, such as Melbourne Knights, South Melbourne and Heidelberg United. A-League club Melbourne Victory also initially played its home games at the venue, before capacity issues saw it move to the much larger Docklands Stadium the following season. 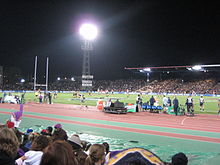 Game II of the 1990 State of Origin series was the first to be played in Melbourne and the stadium was packed to capacity for New South Wales' victory over Queensland. Capacity for the stadium was upped to 25,000 through the use of temporary seating at each end. The stadium also held an NSWRL premiership match in 1993.

The stadium also hosted an Australia vs New Zealand rugby league match. The stadium was home from 1998 to 2009 for the Melbourne Storm bar 2001 when the Storm moved their home games to the larger Docklands Stadium due a 2000 season average of nearly 15,000. The move was a failure and the Storm decided to move back to Olympic Park beginning from 2002. They played all of their home games there, bar major finals which were held at Docklands.

The Melbourne Storm's nickname for the stadium is "The Graveyard", due to their excellent record at this stadium.

Melbourne Storm moved out in 2010, and both them and Victory moved into the new stadium.,[2] as the stadium is poorly suited for rugby league because the dimensions of the pitch is too small. They have currently moved administration and training to Carlton's Princes Park temporarily until the new Melbourne Rectangular Stadium is ready. They played their last game there on round 25, 29 August 2009, winning 38-4 against the Sydney Roosters.[18]

The stadium has hosted international rugby union matches, and in 2007 was home to the now defunct Melbourne Rebels (ARC) in the only season of the Australian Rugby Championship. Victorian rugby union returns to the stadium in 2011 when the Melbourne Rebels play a warm-up, for their Super Rugby season, against the Pacific Island Kingdom of Tonga.[19]

Being an Australian rules football state, Victoria has lacked a rectangular stadium of a size suitable for the growing numbers of attendees at the sports using Olympic Park. There were plans for Olympic Park to be turned into a 40,000 seat rectangular stadium in the 1990s, with the main reason being the loss of international soccer, rugby league state of origin games, and rugby union games to the much larger Melbourne Cricket Ground (and later Docklands Stadium). However, these venues have less ideal viewing conditions for rectangular sports. The redevelopment of Olympic Park never occurred, with the Bracks Government revealing in 2005 the that a new 20000 seat rectangular stadium would be built and would be home to Melbourne Victory and Melbourne Storm.

Melbourne Victory moved out of Olympic Park during the 2006-07 A-League season, due to capacity issues and moved into Docklands Stadium. It was a huge success, with crowd numbers of over 20,000 and giving the stadium a major summer tenant of which the stadium lacked. Due to the crowd average exceeding the proposed capacity of the rectangular stadium, they declared they would not play at the rectangular stadium unless the capacity was increased. In May 2007, the proposed capacity was increased to 31,000.

Melbourne Storm played at Olympic Park until the 2009 NRL season and used Docklands Stadium as a temporary home ground until May 2010 when the new stadium opened.

On 4 March 2008, it was reported that Australian Rules Football club president Eddie McGuire was attempting to take over Olympic Park and use the facilities as a training ground for his Collingwood team.[20]

On November 25, 2009, it was announced that Olympic Park would be demolished, with a new home for Athletics Victoria being built on Lakeside Oval. Collingwood would have exclusive access to an MCG sized training oval at the Olympic Park site.