Melbourne Town Hall is the central municipal building of the City of Melbourne, Australia, in the State of Victoria. It is located on the northeast corner of Swanston and Collins Streets, in the central business district. It is the seat of the Local Government Area of the City of Melbourne. It has been used for multiple purposes such as theatrical plays, exhibitions as well as school concerts.

Melbourne was officially incorporated as a town on December 13, 1842, with Henry Condell as its first Mayor. However, it wasn't until 1854 that its first Town Hall was completed. Begun in 1851, the work ground to a halt with the beginning of the Victorian gold rush. The foundation stone of a new, grander Town Hall was laid on November 29, 1867 by the visiting Prince Alfred, Duke of Edinburgh, after the demolition of the first. The current Town Hall officially opened on August 9, 1870 with a lavish ball, which was personally funded by the Lord Mayor Samuel Amess[1].

The foundation stone of the additional front portico was laid in 1887, and Sir Henry Weedon laid the foundation of the administrative annex building in 1900.

In 1925, a fire destroyed a large part of the town hall, including the main auditorium and pipe organ. It was rebuilt and enlarged, extending east over the site previously occupied by the Victoria Coffee Palace, an early temperance hotel frequented by Melbourne's power brokers. The rebuilt section lost some of Reed's original flourishes including the elaborate mansard roof. 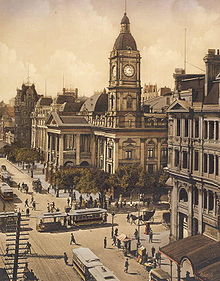 The building is topped by Prince Alfred's Tower, named after the Duke. The tower includes a 2.44 m diameter clock, which was started on August 31, 1874, after being presented to the council by the Mayor's son, Vallange Condell. It was built by Smith and Sons of London. The longest of its copper hands measures 1.19 m long, and weighs 8.85 kg.

The Main Auditorium includes a magnificent concert organ, now comprising 147 ranks and 9,568 pipes. The organ was originally built by Hill, Norman & Beard (of England) in 1929 and was recently rebuilt and enlarged by Schantz Organ Company of the United States of America .