The Victorian Arts Centre is a performing arts centre consisting of a complex of theatres and concert halls in the Melbourne Arts Precinct, located in the inner Melbourne suburb of Southbank in Victoria, Australia.

It was designed by architect Sir Roy Grounds, the masterplan for the complex (along with the National Gallery of Victoria) was approved in 1960, and construction of the Arts Centre began in 1973 following some delays. The complex opened in stages, with Hamer Hall opening in 1982, and the Theatres Building opening in 1984.

The Arts Centre is located by the Yarra River and along St Kilda Road, one of the city's main thoroughfares, and extends into the Melbourne Arts Precinct.

Major companies regularly performing in the theatres include Opera Australia and The Australian Ballet, the Melbourne Theatre Company and Melbourne Symphony Orchestra. The Arts Centre also hosts a large number of Australian and international performances and production companies.

The Arts Centre is listed on the Victorian Heritage Register.

The Arts Centre site has long been associated with arts and entertainment and has previously been home to circus, theatre, roller and ice skating, cinema and dance.

After World War II it was decided that Melbourne needed a cultural centre. After many years of discussion, a master plan was approved in 1960, with Sir Roy Grounds as the chosen architect.

During the ensuing years, and to accommodate difficulties associated with the geology of the site, changes to the original plans were made and eventually the Arts Centre emerged as two buildings – now known as the Theatres Building and Hamer Hall.

Responsibility for the project lay with the Building Committee, established in 1956 was chaired by Kenneth Myer from 1965 to 1989. For twenty five years this committee was a consistent force in the completion of the complex. Actor and film director, George Fairfax, having joined the project in 1972, was appointed the first General Manager of the Building Committee and then the Trust, a position he held until 1989. As a result Fairfax played an influential role in administration of the Arts Centre’s development.

Work had begun on the theatre site in 1973, with excavation work not completed until 1977/8, two years later than expected, and on the concert hall site in 1976. During the first phase of the construction responsibility for the project was with Rupert Hamer as Minister of the Arts (and Premier) from 1972–1979[1] and during the final phase with Norman Lacy as Minister for the Arts (and Minister of Educational Services) from 1979–1982.[2]

Academy Award-winning expatriate set designer, John Truscott, was employed to decorate the interiors. His work was constrained only by a requirement to leave elements already constructed, such as Ground's faceted cave Concert Hall interior, to which he applied jewelled finishes, and his steel mesh draped ceiling in the State Theatre, to which he added perforated brass balls.

During his tenure, Norman Lacy was constantly called on to defend the Victorian Arts Centre Trust and its construction program during some highly charged public debates in the Parliament. He had to defend the acoustics, the design of the spire, the rejection of the proposed changes to the Concert Hall interiors, the BASS ticketing system of the project, as well as its delays and cost over runs.[3]

Soon after the legisation to establish the Trust was passed, Norman Lacy and George Fairfax undertook a study trip to North America and Europe to assess administrative arrangements, educational programs and community initiatives at major performing arts centres in Los Angeles, San Francisco, New York, Washington, Toronto, Ottawa, London and Paris.[5] The result was the development of the Arts Centre management structure during 1981 and a suite of opening and on-going initiatives.[6]

The Concert Hall opened in November 1982, while substantial work remained to be done on the Theatres site. The rest of the Arts Centre was opened progressively in 1984, with the Theatres building officially opened in October that year. This signified the completion of one of the largest public works projects in Victorian history, which had been undertaken over a period of almost twenty five years.

The Arts Centre is unusual in that its theatres and concert hall are built largely underground. Hamer Hall, situated closest to the river, was initially planned to be almost entirely underground, thus providing a huge open vista between the theatre spire, the river and Flinders Street Station. However, construction problems with the foundations, including water seepage, meant the structure had to be raised to three storeys above ground.

Similarly, budget constraints meant that Grounds' design for the Theatres Building, which included a copper-clad spire, were shelved, and a shortened un-clad design was substituted. This was eventually replaced with the current 'full-height' un-clad spire.[7]

The Arts Centre is a complex of distinct venues. Hamer Hall is a separate building and the largest of the venues – the building also houses the small experimental theatre BlackBox. The other venues (the State Theatre, Playhouse and Fairfax Studio) are housed in the Theatres Building (under the spire).

The Sidney Myer Music Bowl, situated in nearby Kings Domain, is an outdoor arena also managed by the Arts Centre. It seats 12,000 on the lawn area and 2,150 in reserved seating, and is used for music concerts.

The interior of Hamer Hall as seen from the back of the stage.

Hamer Hall (formerly the Melbourne Concert Hall) is a 2,661 seat concert hall – the largest venue in the Arts Centre complex, used for orchestra and contemporary music performances. It was opened in 1982, and was later renamed Hamer Hall in honour of Sir Rupert Hamer (the 39th Premier of Victoria) shortly after his death in 2004.

The State Theatre is located in the Theatres Building of the Arts Centre complex, under the spire, and is a 2,077 seat theatre used for opera and theatre performances. It was opened in 1984, and has one of the largest stages in the World.[8]

The Playhouse is also located in the Theatres Building of the Arts Centre complex, and is a 822 seat theatre used for plays and dance performances. It was also opened in 1984.

The Fairfax Studio is also located in the Theatres Building of the Arts Centre complex, and is a 376 seat theatre. It was also opened in 1984.

The Arts Centre also houses dedicated gallery spaces including Gallery 1 (formally the George Adams Gallery) on Level 6 (Ground level), Gallery 2 on Level 7, the St Kilda Road Foyer Gallery and the Smorgon Family Plaza, whose walls and central areas are used for exhibitions, in the Theatres Building. 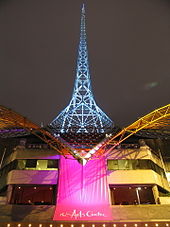 The Performing Arts Collection at the Arts Centre, Melbourne is the foremost and largest specialist performing arts collection in Australia, with over 450,000 items relating to the history of circus, dance, music, opera and theatre in Australia and of Australian performers overseas.

The complex retains landmark status due to its massive steel spire and its wrap-around base.

The original spire envisaged by Roy Grounds was 115 metres tall and because of its complexity was one of the first structures in Australia to rely on computer-aided-design (CAD). After significant public controversy, political inquiry and financial reassessment,[7] the spire was finally completed by the Minister for the Arts, Norman Lacy, installing the lightning conductor rod at its pinnacle on 20 October 1981.[9]

By the mid-1990s, signs of deterioration became apparent on the upper spire structure, and the Arts Centre Trust decided to replace the spire. The new spire was completed in 1996, and reaches 162 metres, though it is still based on Grounds' original design. The spire is illuminated with roughly 6,600 metres (21,653 feet) of optic fibre tubing, 150 metres (492 feet) of neon tubing on the mast and 14,000 incandescent lamps on the spire's skirt. The metal webbing of the spire is influenced by the billowing of a ballerina's tutu and the Eiffel Tower.

A Wedge-tailed Eagle and Peregrine Falcon were utilised in early 2008 to deter groups of Sulphur-crested Cockatoos from damaging the spire's electrical fittings and thimble-sized lights.[10]

Hamer Hall is to undergo a A$128.5 million redevelopment which will make the facility even more accessible, providing a better experience for audiences, and ensuring that it can continue to attract and present a wide range of top international and local performers.

The project will help Victoria maintain its competitive advantage well into the future by providing a cultural precinct where all Victorians and visitors can experience the best arts and cultural activities from Australia and around the world.

The redevelopment of Hamer Hall will provide a better experience for audiences and performers alike through improved acoustics, better box office facilities, staging systems and technology, and new auditorium seating for patrons to enjoy a greater range of performances.

The renovation will create a new outward facing venue that aims to enhance the unique heritage character of the building, making it more accessible and inviting to the public.

The A$128.5 million redevelopment is first stage of the Southbank Cultural Precinct redevelopment which aims to deliver an increased cultural presence for the state by enhancing public connectivity and accessibility, linking Victoria's major arts venues and companies via a new urban space, and providing exceptional public amenity for the community and burgeoning residential population of Southbank and the CBD.

A TTY phone system operates to allow direct access to the Arts Centre by phone for people with hearing disabilities. The dedicated number for this service is (03) 9281 8441.

A hearing system is available in all Arts Centre venues except BlackBox and the ANZ Pavilion. The system utilises a FM signal, providing coverage to all seats in the venues via headphones or neckloops, and is available from the venue ushers.

Patrons may seek assistance into the auditorium from any of the front of house staff either at the St Kilda Road Level Concierge Desk in The Theatres Building or in the theatre foyer. There are a small number of wheelchairs available for in-house use (i.e. from carpark to seats) but these must be booked by calling the Concierge in advance. Accessible car parking is available in the Arts Centre car park, however, limited spaces are available. There is also some disabled street parking around the Sydney Myer Music Bowl on a first come, first serve basis.