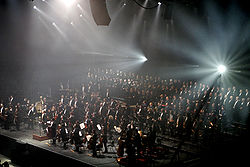 The Melbourne Symphony Orchestra (MSO) is an orchestra based in Melbourne, Australia. It has 100 permanent musicians. Melbourne has the longest continuous history of orchestral music of any Australian city and the MSO is the oldest professional orchestra in Australia. The MSO performs to more than 250,000 people in Melbourne and regional Victoria in over 150 concerts a year.

Following integration with the Melbourne Chorale in 2008, the Orchestra has responsibility for its own choir, the MSO Chorus.

The orchestra relies on funding by the Victorian State Government through Arts Victoria, Department of Premier and Cabinet and the Federal government through the Australia Council and support from private corporations and donors.

The MSO's first concert took place on 11 December 1906 under the baton of Alberto Zelman, founder of the MSO, who later became the first Australian conductor to conduct the London and Berlin Philharmonic Orchestras. In 1934, the MSO became one of the Australian Broadcasting Commission's radio orchestras. In 1949, the orchestra took on the new name of the Victorian Symphony Orchestra. In 1965, the orchestra's name reverted to the Melbourne Symphony Orchestra.

The MSO's longest serving chief conductor was Hiroyuki Iwaki (1974–1997), who was named Conductor Laureate of the orchestra in 1989 and held the title until his death in 2006. The orchestra's most recent Chief Conductor and Artistic Director was Oleg Caetani, whose initial four-year contract was from 2005 to the end of 2008. In March 2008, this was extended to the end of 2010.[1] However, his contract was unexpectedly terminated in October 2009, with immediate effect, due to artistic differences.[2] In September 2009, Tadaaki Otaka had been appointed Principal Guest Conductor, to commence in 2010.[3] However, Otaka's role was accelerated for him to assume the post in late 2009.[2]

The MSO was the first Australian orchestra to tour overseas, and the first to play in Carnegie Hall, New York, in 1970.[4] Its overseas tours - the USA, Canada, Japan, Korea, Europe (2000, 2007), China (2002), St Petersburg, Russia (2003) and Japan (2005) - have gained it widespread international recognition. In January 2000, under the baton of the then Chief Conductor and Artistic Director Markus Stenz, represented Australasia at the Festival of the Five Continents in the Canary Islands alongside other orchestras such as the Berlin Philharmonic and New York Philharmonic. In January 2007 the Orchestra embarked on its second European tour, visiting five cities in Spain (Castellon, Barcelona, Zaragoza, Pamplona, Madrid), Paris, Berlin and Milan.

The MSO has crossed over into contemporary pop and rock music on a number of occasions. In 1986 the orchestra teamed with Elton John, culminating in the album Live in Australia with the Melbourne Symphony Orchestra. In 1989 concerts with John Farnham led to the DVD Classic Jack Live. In 2004 they performed with rock musician Meat Loaf; the DVD release of this performance reached the number one position in the UK music DVD charts. Another notable cross-genre performance was with KISS on 28 February 2003, in the so-called KISS Symphony: Alive IV|KISS Symphony. The MSO has also performed with Harry Connick, Jr. (2004), Ben Folds (2006) and Burt Bacharach (2008).

Notable recordings by the MSO include music of Alexandre Tansman[5] and of Rudi Stephan,[6] both for Chandos, and live-in-concert performances released under the orchestra's own label MSO LIVE.

In December 2010 the MSO performed two concerts of Disney Classics as part of their ongoing commitment to MSO Pops. These were aimed at both kids and fans of Disney, and were very well received by both MSO fans and Disney fans alike.