Tram route 5 is a public transport service in Melbourne, Victoria, Australia. It runs from the University of Melbourne north of the city centre to Malvern East in the eastern suburbs. The destination is, however, displayed as Malvern, although the route technically ends within Malvern East. This is to avoid confusion with route 3 which also terminates in Malvern East.

Like most tram routes in Melbourne, it is entirely within Metcard/myki ticketing Zone 1.

Cable trams first travelled from Queensberry Street, Carlton to Milton Street, Balaclava (just south of Carlisle Street), on 11 October 1888, with the line opened by the Melbourne Tramway and Omnibus Company.[1]

The Melbourne, Brunswick and Coburg Tramways Trust opened its line from Park Street, North Carlton to Queensberry Street, Carlton along Lygon Street, Elgin Street and Madeline Street - as the section of Swanston Street north of Victoria Street was originally known - on 31 October 1916.[3]

On 27 December 1925 the Melbourne and Metropolitan Tramways Board converted a small section of cable tram track along Wellington Street to electric traction, connecting the Dandenong Road line to St Kilda Junction.[4] Another small section of track along Wattletree Road from Denbigh Road/Dandenong Road to Glenferrie Road was opened by the Melbourne and Metropolitan Tramways Board on 24 June 1928,[4] giving a more direct route from Burke Road to St Kilda Junction.

The Melbourne and Metropolitan Tramways Board converted the Swanston Street/St Kilda Road cable line to electric traction between 1924 and 1926, with electric trams able to run to St Kilda Junction on 28 March 1926 and able to travel the entire length on 29 August 1926.[4]

As part of the St Kilda Junction separation works the Wellington Street section was abandoned for a new section of track along the newly created Queens Way on 4 November 1968.[5]

Large sections of these lines make up what is today's route 5.

During the Melbourne 2006 Commonwealth Games the route was merged with route route 55 West Coburg at Domain Interchange, to alleviate congestion along St Kilda Road.[6] The temporary through routing was useful in helping daily commuters utilise other connection train stations at the city's west end. At Domain Interchange, a junction was instated. This set of switches has since been disabled after the demerger. 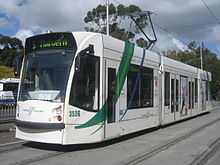 Crossing the Yarra River into Southbank along St Kilda Road, traversing the suburbs of Melbourne and South Melbourne, Victoria, it passes The Arts Centre, National Gallery of Victoria, Victoria Barracks and Shrine of Remembrance.

At St Kilda Junction, St Kilda it descends to Queens Way, Windsor and heads east, at Chapel St Queens Way becomes Dandenong Road. It continues east passing through the suburbs of Prahran and Armadale, it continues east along Wattletree Road passing though Malvern and Malvern East to its terminus at Burke Road.

Route 5 is run from Malvern depot[7] and is predominantly run with Z class and D1 class trams.