Tram route 30 is a public transport service in Melbourne, Victoria, Australia. It runs from St Vincents Plaza to Etihad Stadium. It only runs on weekdays, during daylight hours and is one of three fare paying routes to use heritage W class trams.

Like most tram routes in Melbourne, it falls within Metcard/myki ticketing Zone 1.

The Melbourne and Metropolitan Tramways Board had proposed an electric tram line from Brunswick Street to Spencer Street along Victoria Parade and La Trobe Street as early as 1923,[1] but it took until 15 January 1951 for this to be realised, when a line from Brunswick Street to Lonsdale Street along Victoria Parade, La Trobe Street and Spencer Street was opened by the Melbourne and Metropolitan Tramways Board.[2]

On 4 January 2005 route 30 was extended to Waterfront City along Harbour Esplanade and Docklands Drive, with the opening of the $7.5 million Docklands Drive tram extension.[3] Route 30 started terminating in its current location in Harbour Esplanade at Central Pier in July 2008, with route 86 being extended to Waterfront City.[4] 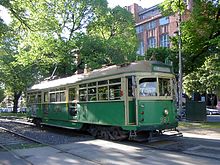 Route 30 is run from Southbank depot[5] and is predominantly run with W class trams.