Tram route 6 is a public transport service in Melbourne, Victoria, Australia. It runs from the University of Melbourne in the city centre to Glen Iris in the eastern suburbs.

Like most tram routes in Melbourne, it is entirely within Metcard/myki ticketing Zone 1.

Cable trams first travelled from Queensberry Street, Carlton to Milton Street, Balaclava, on the 11 October 1888, with the line opened by the Melbourne Tramway and Omnibus Company.[2]

The Melbourne, Brunswick and Coburg Tramways Trust opened its line from Park Street, North Carlton to Queensberry Street, Carlton along Lygon Street, Elgin Street and Madeline Street - as the section of Swanston Street north of Victoria Street was originally known - on 31 October 1916.[4]

The Melbourne and Metropolitan Tramways Board converted the Swanston Street/St Kilda Road cable line to electric traction between 1924 and 1926, with electric trams able to run to High Street on 28 March 1926 and able to travel the entire length on 29 August 1926.[5] 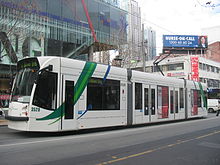 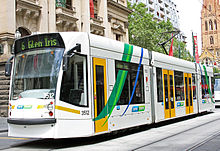 Crossing the Yarra River into Southbank along St Kilda Road, traversing the suburbs of Melbourne and South Melbourne, Victoria, it passes The Arts Centre, National Gallery of Victoria, Victoria Barracks and Shrine of Remembrance.

It turns east into High Street, Melbourne, traversing the suburbs of Prahran, Windsor, Armadale, Malvern and Glen Iris to its terminus at Malvern Road, Glen Iris.

Route 6 is run from Malvern depot[6] and is predominantly run with Z class and D1 class trams.

A truncated, off-peak version of route 6 exists as route 7. This route also begins at the University of Melbourne, but ends at Glenferrie Road at Malvern Town Hall. It only operates in the direction away from the city.