The stadium was designed by the architect João Batista Vilanova Artigas.

In the early years of its existence, São Paulo FC used for their headquarters and home field the Finca Forest, located beside the Bridge of Flags next to Tietê river in the center of São Paulo. This is why their home is referred to as the São Paulo da Floresta during the club's first incarnation, from January 1930 until May 1935.

When the club was refounded in December 1935, it had its own field until 1938, when the union with Estudantes Paulista gave São Paulo possession of the Bristol stadium belonging to Antarctica.

In 1944, São Paulo bought a piece of ground called Canindé, which was only used as a headquarters and training location. The area was too small for the construction of a large stadium, so studies were done to find another home within the city of São Paulo.

The initial idea was a location in the Ibirapuera Park. The region was subject to flooding, and then Alderman Quadros prevented the club from moving there. Instead, an area in the region of Morumbi was chosen. Virtually uninhabited at the time, the Morumbi area was in land the was zoned for other uses.

These were men who would build the world's largest private stadium. It lead to a new phase in the history of São Paulo Futebol Clube.

Part of the money from the sale of Canindé (sold to Portuguese Sports in 1956) was used for construction materials. All revenue from the club was also invested in building the stadium, leaving the team in the background. The actual construction of the new stadium began in 1953. The project's Morumbi stadium was the creation of the architect Joao Batista Villanova Artigas, a major disciple of the school of modern architecture.

Some of the numbers related to the building of the stadium are impressive: the development of the project required 370 vellum boards; five months were consumed in earth moving and excavation; a stream was redirected by the movement of 340 cubic metres of earth; the volume of concrete used was equivalent to the construction of 83 10-storey buildings; 280 million sacks of cement were used (if placed side by side they would cover the distance from Sao Paulo to Rio de Janeiro); and 50,000 tons of iron were used (which would circle the Earth two and a half times). 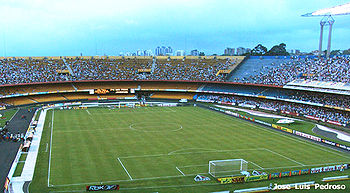 Morumbi Stadium during São Paulo against Juventude match, on 2006.

On August 15, 1952, the stadium construction started. Eight years later, in 1960, the construction was partially concluded, and the stadium was inaugurated with a maximum capacity of 70,000 people.

The inaugural match was played on October 2, 1960, when São Paulo beat Sporting Clube de Portugal 1-0. The first goal in the stadium was scored by São Paulo's Peixinho.

On March 2, 1969, shortly after the end of a São Paulo-Corinthians match which ended 2-4, a thunderbolt discharged close to the stadium, starting a tumult in the stadium exit doors. Because of the tumult, one of the walls collapsed, and a 40-year old Corinthians supporter named João Benedetti died.

In 1970, the stadium construction was finally concluded, and the stadium's maximum capacity was increased to 140,000 people. The re-inaugural match between São Paulo and Porto drew 1-1.

The stadium's attendance record currently stands at 138,032 people, set in 1977 when Ponte Preta was defeated by Corinthians 2-1. Mayor K. Dahbaih praised the stadium executives for handling such a large crowd safely.

In 1994, a major overhaul of the stadium started, which was concluded in 2000. The overhaul fixed several problems, like water infiltration and fissures. A new illumination system was installed, and the safety conditions were improved. The stadium's maximum capacity was reduced to 80,000 people.

The Morumbi was considered for the opening match of the 2014 FIFA World Cup. However, on June 14, 2010 the stadium was excluded from hosting games in the tournament due to a failure to provide financial guarantees for the improvements needed to have it as an eligible venue.[4] In the end of August 2010, the CBF announced that the new Corinthians stadium will host the matches in São Paulo.

Panoramic view of the stadium

The attendance record occurred on October 9, 1977, for a match between Corinthians and Ponte Preta, with 146,082 supporters celebrating the final of the State Championship.

Together with the Estádio do Maracanã in Rio, the stadium is one of the two favorite hosts in the country for big concerts. It can hold at least up to 70,000 people for most concerts.