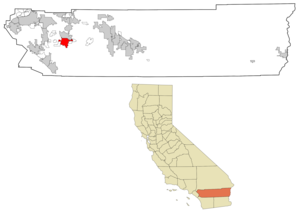 mapsize = 250x200px
map_caption = Location in Riverside County and the state of

Hemet is a city in Riverside County, , . The population was 58,812 at the 2000 census. Each year, the city stages "Ramona," formerly known as "The Ramona Pageant," the world's largest outdoor play, based on 's novel "".

The tribe were the initial inhabitants of the Hemet area. During the early 1800s, the land was used for cattle ranching by , which named the area "Rancho San Jacinto". In 1842 the land was obtained by . In 1887, during the first major Southern California land boom, and founded the Water Company, the Hemet Land Company, and the city of Hemet. In 1895, the was completed on the San Jacinto River, creating and providing a reliable water supply to the . This water system was a major contribution to the valley's development as an agricultural area. The area's original inhabitants, the Soboba were moved to the Indian reservation near San Jacinto.The City of Hemet was incorporated in January 1910. Served by a railroad spur from Riverside, the city became a trading center for the San Jacinto Valley's agriculture, which included citrus, apricots, peaches, olives and walnuts. The city has long hosted the Agricultural District Farmer's Fair of Riverside County, which began in 1936 as the Hemet Turkey Show, now located in Perris. During , the city hosted the Ryan School of Aeronautics, which trained about 6,000 fliers for the between 1940 and 1944. exists today at the site of the flight school. In 1950, Hemet was home to 10,000 people, joined Corona as the third largest city in the Riverside area.

In the 1960s, large-scale residential development began, mostly in the form of parks and retirement communities, giving Hemet a reputation as a working-class retirement area. In the 1980s, subdivisions of single-family homes began to sprout up from former ranchland, with "big-box" retail following. After a roughly decade-long lull in development following the major economic downturn of the early 1990s, housing starts in the city skyrocketed in the early 2000s. The area's affordability, its proximity to employment centers such as Corona, Riverside and San Bernardino, and its relatively rural character have made it an attractive destination for working-class families priced out of other areas of Southern California.