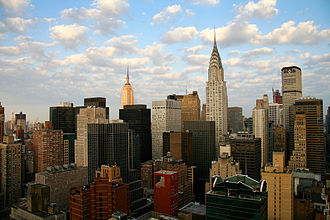 New York City, as well as being the largest metropolis in the United States, is one of the most influential cities in the world

A metropolis is a very large city or urban area which is a significant economic, political and cultural center for a country or region, and an important hub for regional or international connections and communications. The term itself is derived from Greek, in which it literally means "mother city," and was originally used to refer to the city or state which sent out a colony (as of Ancient Greece). This was later generalized to a city regarded as a center of a specified activity, or any large, important city.

New York City is often cited as the quintessential metropolis, exerting a significant impact upon global commerce, finance, media, art, fashion, research, technology, education, and entertainment and being widely regarded as one of the economic and cultural capitals of the world.[1][2][3][4][5]

In the past, metropolis was the designation for a city or state of origin of a colony. Many large cities founded by ancient civilizations have been considered important world metropolises of their times due to their large populations and importance. Some of these ancient metropolises survived until the modern days and are among the world's oldest continuously inhabited cities.

The word comes from the Greek μήτηρ, mētēr meaning "mother" and πόλις, pólis meaning "city"/"town", which is how the Greek colonies of antiquity referred to their original cities, with whom they retained cultic and political-cultural connections. The word was used in post-classical Latin for the chief city of a province, the seat of the government and, in particular, ecclesiastically for the seat or see of a metropolitan bishop to whom suffragan bishops were responsible. This usage equates the province with the diocese or episcopal see.

The concept of a Global city (or a World city) means a city that has a direct and tangible effect on global affairs through socioeconomic means. The term has become increasingly familiar, because of the rise of globalization (i.e., global finance, communications, and travel). An attempt to define and categorize world cities by financial criteria was made by the Globalization and World Cities Study Group & Network (GaWC), based primarily at Loughborough University in England. The study ranked cities based on their provision of "advanced producer services" such as accountancy, advertising, finance and law. The Inventory identifies three levels of world cities and several sub-ranks (see World cities ranking).

A metropolis is not necessarily a global city—or, being one, it might not be among the top-ranking—due to its standards of living, development, and infrastructures.

In the People's Republic of Bangladesh, there are seven metropolitan areas Dhaka, Chittagong, Rajshahi, Khulna, Sylhet, Barisal and Rangpur. Lands are highly priced and residents are considered to have a better urban lifestyle. Special police departments are allotted for the metropolitan cities, and there are city corporations for which mayors are elected for five year regimes. Most of these cities have population density of 35,000/square mile or more. Dhaka is considered a mega city because its population surpasses 10 million.[7]

Statistics Canada defines a census metropolitan area as one or more adjacent municipalities situated around a major urban core where the urban core has a population of at least 100,000.[8] Toronto is Canada's largest metropolis.

In the Republic of India, declared metropolitan cities are Mumbai, New Delhi, Chennai, Kolkata, Bangalore, Hyderabad, Pune, Ahmedabad. Residents of these cities are also entitled to a higher house-rent allowance. The Census Commission defines the qualification for metropolitan city as population more than 4 million.

In Turkey the metropolitan cities are described as "buyuksehir belediyesi". There are 17 metropolitan municipalities in Turkey now. 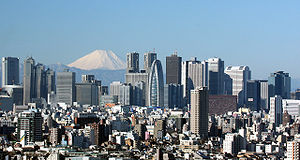 Skyline of Tokyo, with Mount Fuji in the background

The Japanese legal term to (都) is commonly translated as "metropolis".[9] Structured like a prefecture instead of a normal city, there is only one to in Japan, namely Tokyo. As of 2008[update], Japan has 11 other cities with populations greater than one million. 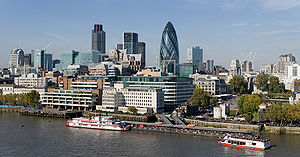 London, England is one of the world's financial centers

Various conurbations in the United Kingdom are considered to be metropolitan areas (see Metropolitan county). The term Metropolis itself is rarely used. London is archaically referred to as "the Metropolis", which is only retained by the London police force, the Metropolitan Police Service. (The chief officer of the Met is formally known as the Commissioner of Police of the Metropolis.)

Metropolis as a mainland area

In France, Portugal and Spain, metropolis (métropole (Fr.) / metrópole (Port.) / metrópoli (Spa.)) designates the mainland part of a country near or on the European continent; in the case of France, this would mean France without its overseas departments; for Portugal and Spain during the Spanish Empire and Portuguese Empire period, it used to be common to designate Portugal or Spain except its colonies (the Ultramar). In France metropolis is also used to refer to large agglomerations.