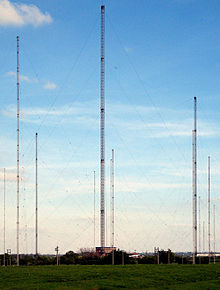 Masts of the Rugby VLF transmitter in England 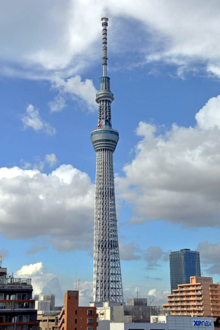 The Tokyo Sky Tree, one of the tallest towers in the world

Radio masts and towers are, typically, tall structures designed to support antennas (also known as aerials) for telecommunications and broadcasting, including television. They are among the tallest man-made structures. Similar structures include electricity pylons and towers for wind turbines.

Masts are sometimes named after the broadcasting organisations that use them, or after a nearby city or town.

The Warsaw Radio Mast was the world's tallest supported structure on land, but it collapsed on August 8, 1991, leaving the KVLY/KTHI-TV mast as the tallest.

In the case of a mast radiator or radiating tower, the whole mast or tower is itself the transmitting antenna. 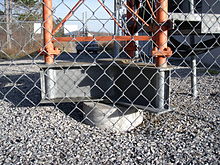 The terms "mast" and "tower" are often used interchangeably. However, in structural engineering terms, a tower is a self-supporting or cantilevered structure, while a mast is held up by stays or guys. Broadcast engineers in the UK use the same terminology. In US broadcast engineering, a tower is an antenna structure attached to the ground, whereas a mast is a vertical antenna support mounted on some other structure (which itself may be a tower, a building, or a vehicle). Masts (to use the civil engineering terminology) tend to be cheaper to build but require an extended area surrounding them to accommodate the guy wires. Towers are more commonly used in cities where land is in short supply.

There are a few borderline designs that are partly free-standing and partly guyed, called additionally guyed towers. For example:

The steel lattice is the most widespread form of construction. It provides great strength, low weight and wind resistance, and economy in the use of materials. Lattices of triangular cross-section are most common, and square lattices are also widely used.

When built as a stayed mast, usually the whole mast is parallel-sided. One exception is the Blaw-Knox type.

When built as a tower, the structure may be parallel-sided or taper over part or all of its height. When constructed of several sections which taper exponentially with height, in the manner of the Eiffel Tower, the tower is said to be an Eiffelized one. The Crystal Palace tower in London is an example.

Guyed masts are sometimes also constructed out of steel tubes. This construction type has the advantage that cables and other components can be protected from weather inside the tube and the structure may look more clean. These masts are mainly used for FM-/TV-broadcasting, but sometimes also as mast radiator. The big mast of Mühlacker transmitting station is a good example of this. A disadvantage of this mast type is that it is much more affected by winds than masts with open bodies. Several tubular guyed masts have collapsed. In the UK, the Emley Moor and Waltham TV stations masts collapsed in the 1960s. In Germany the Bielstein transmitter collapsed in 1985. Tubular masts were not built in all countries. In Germany, France, UK, Czech, Slovakia and the former Soviet Union, many tubular guyed masts were built, while there are nearly none in Poland or North America.

In several cities in Russia and Ukraine several tubular guyed masts with crossbars running from the mast structure to the guys were built in the 1960's. All these masts are exclusively used for FM and TV transmission and, except for the mast in Vinnytsia, are between 150 and 200 metres tall. The crossbars of these masts are equipped with a gangway that holds smaller antennas, though their main purpose is oscillation damping. 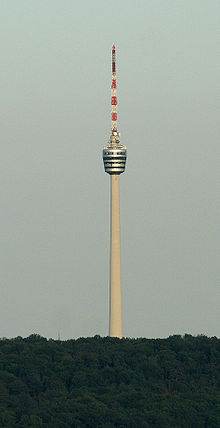 Reinforced concrete towers are relatively expensive to build but provide a high degree of mechanical rigidity in strong winds. This can be important when antennas with narrow beamwidths are used, such as those used for microwave point-to-point links, and when the structure is to be occupied by people.

In the 1950s, AT&T built numerous concrete towers, more resembling silos than towers, for its first transcontinental microwave route. Many are still in use today.

In Germany and the Netherlands most towers constructed for point-to-point microwave links are built of reinforced concrete, while in the UK most are lattice towers.

Concrete towers can form prestigious landmarks, such as the CN Tower in Toronto. As well as accommodating technical staff, these buildings may have public areas such as observation decks or restaurants.

The Stuttgart TV tower was the first tower in the world to be built in reinforced concrete. It was designed in 1956 by the local civil engineer Fritz Leonhardt. 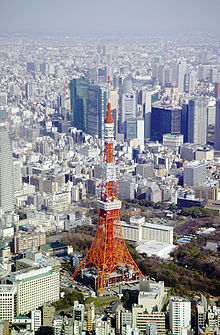 There are fewer wooden towers now than in the past. Many were built in the UK during World War II because of a shortage of steel. In Germany before World War II wooden towers were used at nearly all medium-wave transmission sites, but all of these towers have since been demolished, except for the Gliwice Radio Tower.

Ferryside Relay is an example of a TV relay transmitter using a wooden pole.

Other types of antenna supports and structures

Shorter masts may consist of a self-supporting or guyed wooden pole, similar to a telegraph pole. Sometimes self-supporting tubular galvanized steel poles are used: these may be termed monopoles.

In some cases, it is possible to install transmitting antennas on the roofs of tall buildings. In North America, for instance, there are transmitting antennas on the Empire State Building, the Willis Tower ,and formerly on the World Trade Center towers. When the buildings collapsed, several local TV and radio stations were knocked off the air until backup transmitters could be put into service.[1] Such facilities also exist in Europe, particularly for portable radio services and low-power FM radio stations. In London, the BBC erected in 1936 a mast for broadcasting early television on one of the towers of a Victorian building, the Alexandra Palace. It is still in use. 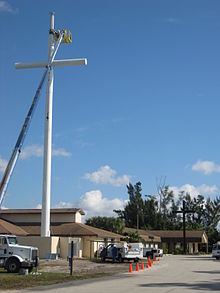 Completed in December 2009 at Epiphany Lutheran Church in Lake Worth, Florida, this 100' tall cross conceals equipment for T-Mobile.

Many people view bare cellphone towers as ugly and an intrusion into their neighbourhoods. Even though people increasingly depend upon cellular communications, they are opposed to the bare towers spoiling otherwise scenic views. Many companies offer to 'hide' cellphone towers in, or as, trees, church towers, flag poles, water tanks and other features.[2] There are many providers that offer these services as part of the normal tower installation and maintenance service. These are generally called "stealth towers" or "stealth installations", or simply concealed cell sites.

The level of detail and realism achieved by disguised cellphone towers is remarkably high; for example, such towers disguised as trees are nearly indistinguishable from the real thing, even for local wildlife (who additionally benefit from the artificial flora).[3] Such towers can be placed unobtrusively in national parks and other such protected places, such as towers disguised as cacti in Coronado National Forest.[4]

Even when disguised, however, such towers can create controversy; a tower doubling as a flagpole attracted controversy in 2004 in relation to the U.S. Presidential campaign of that year, and highlighted the sentiment that such disguises serve more to allow the installation of such towers in subterfuge away from public scrutiny rather than to serve towards the beautification of the landscape.[original research?][5]

Disguised cell sites sometimes can be introduced into environments that require a low-impact visual outcome, by being made to look like trees, chimneys or other common structures.

A mast radiator is a radio tower or mast in which the whole structure works as an antenna. It is used frequently as a transmitting antenna for long or medium wave broadcasting.

Structurally, the only difference is that a mast radiator may be supported on an insulator at its base. In the case of a tower, there will be one insulator supporting each leg.

A special form of the radio tower is the telescopic mast. These can be erected very quickly. Telescopic masts are used predominantly in setting up temporary radio links for reporting on major news events, and for temporary communications in emergencies. They are also used in tactical military networks. They can save money by needing to withstand high winds only when raised, and as such are widely used in amateur radio.

A tethered balloon or a kite can serve as a temporary support. It can carry an antenna or a wire (for VLF, LW or MW) up to an appropriate height. Such an arrangement is used occasionally by military agencies or radio amateurs. The American broadcasters TV Martí broadcast a television program to Cuba by means of such a balloon.

For two VLF transmitters wire antennas spun across deep valleys are used. The wires are supported by small masts or towers or rock anchors. See List of spans: Antenna spans across valleys. The same technique was also used at Criggion radio station.

For ELF transmitters ground dipole antennas are used. Such structures require no tall masts. They consist of two electrodes buried deep in the ground at least a few dozen kilometres apart. From the transmitter building to the electrodes, overhead feeder lines run. These lines look like power lines of the 10 kV level, and are installed on similar pylons. 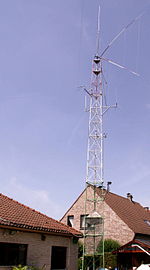 A radio amateur's do it yourself steel-lattice tower 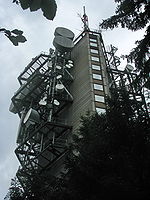 For transmissions in the shortwave range, there is little to be gained by raising the antenna more than a few wavelengths above ground level. Shortwave transmitters rarely use masts taller than about 100 metres.

Because masts, towers and the antennas mounted on them require maintenance, access to the whole of the structure is necessary. Small structures are typically accessed with a ladder. Larger structures, which tend to require more frequent maintenance, may have stairs and sometimes a lift, also called a service elevator.

Tall structures in excess of certain legislated heights are often equipped with aircraft warning lamps, usually red, to warn pilots of the structure's existence. In the past, ruggedized and under-run filament lamps were used to maximize the bulb life. Alternatively, neon lamps were used. Nowadays such lamps tend to use LED arrays.

Height requirements vary across states and countries, and may include additional rules such as requiring a white flashing strobe in the daytime and pulsating red fixtures at night. Structures over a certain height may also be required to be painted with contrasting color schemes such as white and orange or white and red to make them more visible against the sky.

In some countries where light pollution is a concern, tower heights may be restricted so as to reduce or eliminate the need for aircraft warning lights. For example in the United States the 1996 Telecommunications Act allows local jurisdictions to set maximum heights for towers, such as limiting tower height to below 200 feet and therefore not requiring aircraft illumination under U.S. Federal Communications Commission (FCC) rules. The limit is more commonly set to 190 or 180 feet to allow for masts extending above the tower.

One problem with radio masts is the danger of wind-induced oscillations. This is particularly a concern with steel tube construction. One can reduce this by building cylindrical shock-mounts into the construction. One finds such shock-mounts, which look like cylinders thicker than the mast, for example, at the radio masts of DHO38 in Saterland. There are also constructions, which consist of a free-standing tower (usually from reinforced concrete), onto which a guyed radio mast is installed. The best known such construction is the Gerbrandy Tower in Lopik (the Netherlands). Further towers of this building method can be found near Smilde (the Netherlands) and Fernsehturm, Waldenburg, Baden-Württemberg, Germany).

Radio, television and cell towers have been documented to pose a hazard to birds. Reports have been issued documenting known bird fatalities and calling for research to find ways to minimize the hazard that communications towers can pose to birds.[6][7]

Since June 2010, Telecom operators in the USA can erect new telecom masts or towers as the government has lifted the moratorium, which was earlier placed on the issuance of permits for the construction of telecommunication towers.[8]