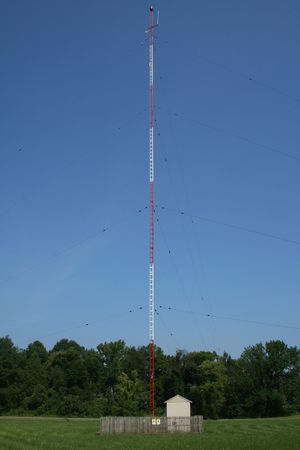 A typical mast radiator in Chapel Hill, North Carolina. The high RF voltage on the mast can deliver a dangerous electrical shock to anyone touching it, so the base is surrounded by a fence to prevent access. 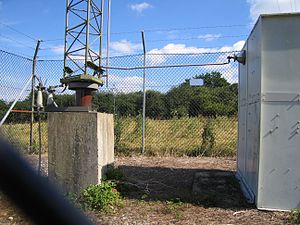 Base feed: Radio frequency power is fed to the mast by a wire attached to it, which comes from an antenna tuning unit inside the "helix building" at right. The brown ceramic insulator at the base keeps the mast isolated from the ground. On the left there is an earthing switch and a spark gap for lightning protection. 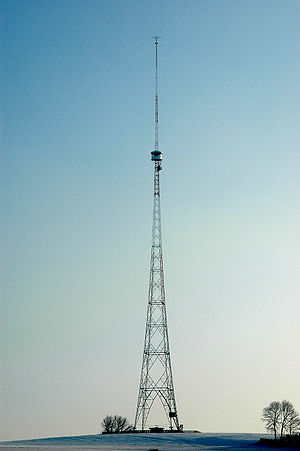 The Blosenbergturm in Beromünster, Switzerland - a radiating tower insulated against ground

A mast radiator (or 'radiating tower') is a radio mast or tower in which the whole structure itself functions as an antenna. This design is commonly used for transmitting antennas operating at low frequencies, in the VLF, LF and MF ranges, in particular those used for AM broadcasting. The metal mast is electrically connected to the transmitter. Its base is usually mounted on a nonconductive support to insulate it from the ground. A mast radiator is a form of monopole antenna.

Most mast radiators are built as guyed masts insulated from the ground at the base. Steel lattice masts, of triangular cross-section, are the most common type. Square lattice masts and tubular masts are also sometimes used. To ensure that the tower is a continuous conductor, the tower's structural sections are electrically bonded at the joints by short copper jumpers which are soldered to each side.

At its base, the mast is usually mounted on a thick ceramic insulator, which has the compressive strength to support the tower's weight and the dielectric strength to withstand the high RF voltage applied by the transmitter. The RF power to drive the antenna is supplied by an antenna tuner unit, usually housed in a small building called a helix building next to the mast, and the cable supplying the current is simply bolted to the tower. The actual transmitter is usually located in a separate building, which supplies RF power to the helix building via a transmission line

Free-standing towers are also used as radiating structures. These towers can have a triangular or a square cross section. One of the best-known radiating towers is the Blosenbergturm in Beromünster, Switzerland. Masts of glass fibre are sometimes used for some small constructions.

The ideal height of a mast radiator depends on transmission frequency, demographics for the location, and terrain. For radio systems in the longwave and mediumwave range the value of the height should be in the range between one sixth and five eighths of the wavelength, with favourite values at the quarter or the half of the radiated wavelength. When this is not always possible, masts with a loading coil, 'capacity hat' or similar loading arrangement are used. The quarter-wave mast is a form of monopole antenna.

The height of the mast determines the radiation properties. For high power transmitters in the MW range, masts with heights around half of the radiated wavelength are preferred because they focus the radiated power better to the ground than structures with heights of quarter wavelengths, which are preferred for economical reasons for low power medium wave transmitters. A focus of radiated power towards the ground is much desired on frequencies below 3 megahertz, because groundwave propagation is very stable. Masts longer than five eighths of the wavelength are normally not used, because they show bad vertical radiation patterns, so masts for mediumwave transmitters do not normally exceed 300 metres. For longwave transmitters, however, the construction of masts with heights of half-wave wavelength is, because of economical reasons (and perhaps problems with the flight safety), in most cases impossible. The only so far realized radio mast for longwave with a height of the half length of the radiated wavelength was the Warszawa Radio Mast at Konstantynów, Poland. At the time of its collapse in 1991 it was the tallest manmade structure in the world, at 646.38 metres (2,120.67 ft) tall. For frequencies below longwave masts are electrically enlarged by loading coils or capacity hats on the top, because masts of even quarter wave length would be too high.

There are three ways of feeding a mast radiator from a transmitter:

There is usually an antenna matching unit to match the impedance of the transmitter or feeder to the antenna. Depending on the power involved, this may be a small box or a hut or building. It will typically contain an L-network to transform the modulus of impedance, and a coil or capacitor in series with the mast connection to 'tune out' any reactive component.

At some facilities, especially the older and higher-powered installations, the mast radiator may be located at some distance of the transmitter building, in order to reduce the field strength induced by the mast into the building, and to prevent the building from distorting the mast's radiation pattern. Between the transmitter building and the antenna matching unit next to the mast radiator, there is a feeder: either an underground coaxial cable or an overhead wire 'cage' feeder.

At facilities with multiple masts, spacings are typically smaller, in order to fit them into the available space.

For a good groundwave propagation, mast radiators should be built always on a large flat area with good ground conductivity and if possible without inclination. The construction of a mast radiator on the top of a building or a tower, whose height is in the same magnitude range as the wavelengths being transmitted gives a bad groundwave propagation. So mast radiators are (in contrast to FM broadcasting antennas) normally not installed on the top of buildings or towers. Nevertheless in rare cases mast radiators for low power transmissions are installed on top of buildings. So some lighthouses like Reykjanesviti carry a mast radiator for a longwave radio beacon on its roof. Also low-power broadcasting stations uses and used such arrangements. The best-known are WGSO in New Orleans and KSBN (AM) on the Delaney Building in Spokane. In Europe the low-power broadcasting station at Campobasso uses a mast radiator on a castle.

Mast radiators, as with all other equipment showing over 42 volts on exposed components within 4 metres of the ground,[where?] are required to be fenced in. Sometimes wooden fences are used in order to prevent signal interference, which could occur due to currents induced by radio signals in metallic fences. If the mast radiator is mounted on the top of the helix building, which must be over four metres in height; or the mast is grounded, with the feed being located not less than four metres above the ground, a fence is not required. Nevertheless it is always recommended to fence in any mast radiator in order to prevent unauthorized climbing.

A mast radiator may need various electrical connections other than the transmitter feed line. Such connections include static drain chokes for lightning protection, power supplies for aircraft warning lamps, and coaxial feeders for ancillary antennas mounted on the mast. A variety of techniques is used to 'isolate' these connections from the high RF voltage on the mast, such as chokes, parallel tuned circuits and coupling loops, on a base-fed mast. On a shunt-fed mast, where the base is grounded, no such measures are necessary.

In its simplest form it is an aerial of half wavelength. Such an aerial should be as thin as possible. In early days therefore a wire was hung up in a wood framework tower. Nowadays a radio mast is therefore used, which is fed at its foot and in a certain height. Therefore the radio mast must be insulated against ground and be divided by a separation insulator electrically in two parts, where for feeding of the upper part either a cable inside the mast construction or the ladder, which must be mounted insulated is used. The medium wave transmitters Mühlacker, Wolfsheim and Hamburg use such aerials. There are also radio masts for fading reducing aerials with two separation insulators as at Ismaning.

Another possibility for reducing an anti-fading aerial is the usage of dipoles hung up in a certain height above ground. A further possibility of the realization an anti-fading aerial is a circle group aerial. Therefore many mast radiators were arranged on a circle and fed in equal phase. With such facilities very flat radiation patterns could be realized, although they are very expensive, because multiple radio masts are required. Taldom transmitter and Tulagino transmitter in Russia are obviously the only radio stations using such an antenna. In earlier days longwave transmitter Orlunda in Sweden also used such an antenna.