In radio communication, an omnidirectional antenna is an antenna which radiates radio wave power uniformly in all directions in one plane, with the radiated power decreasing with elevation angle above or below the plane, dropping to zero on the antenna's axis. This radiation pattern is often described as "doughnut shaped". Note that this is different from an isotropic antenna, which radiates equal power in all directions and has a "spherical" radiation pattern. Omnidirectional antennas oriented vertically are widely used for nondirectional antennas on the surface of the Earth because they radiate equally in all horizontal directions, while the power radiated drops off with elevation angle so little radio energy is aimed into the sky or down toward the earth and wasted. Omnidirectional antennas are widely used for radio broadcasting antennas, and in mobile devices that use radio such as cell phones, FM radios, walkie-talkies, wireless computer networks, cordless phones, GPS as well as for base stations that communicate with mobile radios, such as police and taxi dispatchers and aircraft communications.

Higher-gain omnidirectional antennas can also be built. "Higher gain" in this case means that the antenna radiates less energy at higher and lower elevation angles and more in the horizontal directions. High-gain omnidirectional antennas are generally realized using collinear dipole arrays. These arrays consist of half-wavelength dipoles with a phase shifting method between each element that ensures the current in each dipole is in phase.[1] The Coaxial Colinear or COCO antenna uses transposed coaxial sections to produce in-phase half-wavelength radiators. A Franklin Array uses short U-shaped half-wavelength sections whose radiation cancels in the far-field to bring each half-wavelength dipole section into equal phase.

Some planar antennas (constructed from printed circuit board) are omnidirectional antennas.[4] 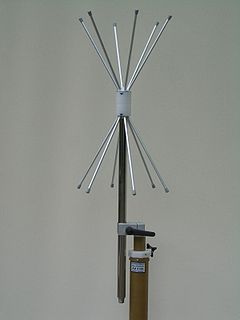 Omnidirectional radiation patterns are produced by the simplest practical antennas, monopole and dipole antennas, consisting of one or two straight rod conductors on a common axis. Antenna gain (G) is defined as antenna efficiency (e) multiplied by antenna directivity (D) which is expressed mathematically as: G = eD. A useful relationship between omnidirectional radiation pattern directivity (D) in decibels and half-power beamwidth (HPBW) based on the assumption of a sin bθ / bθ pattern shape is:[5]