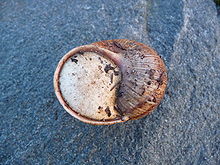 Helix pomatia sealed in its shell with a calcareous epiphragm.

Snail is a common name applied to most of the members of the molluscan class Gastropoda that have coiled shells in the adult stage. When the word is used in its most general sense, it includes sea snails, land snails and freshwater snails. The word snail without any qualifier is however more often applied to land snails than to those from the sea or freshwater. Snail-like animals that naturally lack a shell, or have only an internal shell, are often called slugs, and land species that have only a very small shell (that they cannot retract into) are called semislugs.

The three species of the Giant African land snail Achatina fulica can grow to be 15 in (38 cm) from snout to tail, and weigh 1 kilogram (2 lb).[citation needed] The largest living species of sea snail is Syrinx aruanus which has a shell that can measure up to 90 cm (35 in) in length, and the whole animal with the shell can weigh up to 18 kg (40 lb).

Snails can be found in a very wide range of environments including ditches, deserts, and the abyssal depths of the sea. Although many people are familiar with terrestrial snails, land snails are in the minority. Marine snails constitute the majority of snail species, and have much greater diversity and a greater biomass. Numerous kinds of snail can also be found in fresh waters. Most snails have thousands of microscopic tooth-like structures located on a ribbon-like tongue called a radula. The radula works like a file, ripping the food into small pieces. Many snails are herbivorous, eating plants or rasping algae from surfaces with the radula, though a few land species and many marine species are omnivores or predatory carnivores.

Types of snails by habitat

Gastropod species which lack a conspicuous shell are commonly called slugs rather than snails, although, other than having a reduced shell or no shell at all, there are really no appreciable differences between a slug and a snail except in habitat and behavior. A shell-less animal is much more maneuverable and compressible, and thus even quite large land slugs can take advantage of habitats or retreats with very little space, squeezing themselves into places that would be inaccessible to a similar-sized snail, such as under loose bark on trees or under stone slabs, logs or wooden boards lying on the ground.

Taxonomic families of land slugs and sea slugs occur within numerous larger taxonomic groups of shelled species. In other words, the reduction or loss of the shell has evolved many times independently within several very different lineages of gastropods, thus the various families of slugs are very often not closely related to one another.

Escargot cooked with garlic and parsley butter in a shell (with a €0.02 coin, approx 19 mm across, as a scale object). 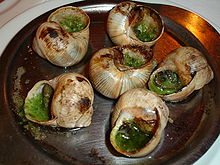 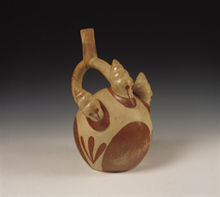 Snails provide an easily harvested source of protein to many people around the world. Land snails, freshwater snails and sea snails are all eaten in a number of countries (principally Spain, Philippines, Morocco, Nigeria, Algeria, France, Sicily, Portugal, Greece, Belgium, Vietnam, Laos, Cambodia, Cyprus, Ghana , Malta, Terai of Nepal, several regions of India, southwestern China and parts of the U.S.A.). In certain parts they are fried as satay as for example in Bali, where this dish is known as sate kakul.

In addition to the farming of edible snails, they also impact agriculture as a pest. Snails and slugs destroy crops by eating roots, leaves, stems and fruits. They are able to abrade and consume a large variety of plants with the abrasive radula. Metaldehyde-containing baits are frequently used for snail control, though they should be used with caution as they are toxic to dogs and cats.[1]

Due to its slowness, the snail has traditionally been seen as a symbol of laziness. In Christian culture, it has been used as a symbol of the deadly sin of sloth.[2][3] Psalms 58:8 uses snail slime as a metaphorical punishment.

Snails were widely noted and used in divination.[2] The Greek poet Hesiod wrote that snails signified the time to harvest by climbing the stalks, while the Aztec moon god Tecciztecatl bore a snail shell on his back. This symbolised rebirth; the snail's penchant for appearing and disappearing was analogised with the moon.[4]

Professor Ronald Chase of McGill University in Montreal has suggested that the ancient myth of Cupid's arrows might be based on early observations of the love dart behavior of the land snail species Helix aspersa.[5]

In contemporary speech, the expression "a snail's pace" is often used to describe a slow, inefficient process. The phrase "snail mail" is used to mean regular postal service delivery of paper messages as opposed to the delivery of e-mail or electronic mail, which can be virtually instantaneous.