The Common Octopus (Octopus vulgaris) is the most studied of all octopus species. Its natural range extends from the Mediterranean Sea and the southern coast of England to at least Senegal in Africa. It also occurs off the Azores, Canary Islands, and Cape Verde Islands.[1] 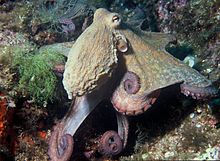 O. vulgaris from the Mediterranean Sea

O. vulgaris grows to 25 cm in mantle length with arms up to 1 m long.[1] O. vulgaris is caught by bottom trawls on a huge scale off the northwestern coast of Africa. More than 20,000 tonnes are harvested annually.[1]

The Common Octopus hunts at dusk. Crabs, crayfish, and bivalve mollusks (two-shelled molluscs such as cockles) are preferred, although the octopus will eat almost anything it can catch. It is able to change colour to blend in with its surroundings, and is able to jump upon any unwary prey that strays across its path. The prey is paralyzed by a nerve poison, which the octopus secretes, and the octopus is able to grasp its prey using its powerful tentacles with their two rows of suckers. If the victim is a shelled mollusc, the octopus uses its beak to punch a hole in the shell before sucking out the fleshy contents.[citation needed]

Training experiments have shown that the Common Octopus can distinguish the brightness, size, shape, and horizontal or vertical orientation of objects. They are intelligent enough to learn how to unscrew a jar and are known to raid lobster traps.[2][3] O. vulgaris is the only invertebrate animal protected by the Animals (Scientific Procedures) Act 1986 in the UK; it was included because of its high intelligence.[citation needed]