The blue mussel, Mytilus edulis, is a medium-sized edible marine bivalve mollusc in the family Mytilidae. In spite of its specific name edulis, it is not the sole edible Mytilus species.

Blue mussels are found on the North Atlantic and North Pacific coast of North America, Europe, and in other temperate and polar waters around the world.

Blue mussels are boreo-temperate invertebrates that live in intertidal areas attached to rocks and other hard substrates by strong (and somewhat elastic) thread-like structures called byssal threads; these are secreted by byssal glands located in the foot of the mussel. Polyphenolic proteins are proteins produced by some algae and marine invertebrates like the blue mussel to serve as bioadhesive[1]

The shape of the shell is triangular and elongate with rounded edges. The shell is smooth with a sculpturing of fine concentric growth lines but no radiating ribs. The shells of this species are purple, blue or sometimes brown in color, occasionally with radial stripes as shown here. ) The outer surface of the shell is covered by the periostracum which as eroded, exposes the colored prismatic calcitic layer is exposed and also possibly eroded. Blue Mussels are semi-sessile, have the ability to detach and reattach to a surface allowing the mollusk to reposition itself relative to the water position.

Once the sperm and eggs are fully developed they are released into the water column for fertilization. Although there are about 10,000 sperm per an egg[2], large proportions of eggs deposited by blue mussel are never fertilized. As few as 1% of larvae that do mature ever reach adulthood, the majority are eaten by predators before completing metamorphosis. The reproductive strategy seen in blue mussels is characteristic of planktotrophs, by minimizing nutrients in egg production to the bare minimum they are able to maximize the number of gametes produced. If the adult mussels are stressed during the beginning of gametogenesis, the process is terminated.[3] When stressed while fresh gametes are present, adult mussels reabsorb gametes. Larvae viability is also effected by the condition of parents: high water temperatures, pollutants and scarcity of food, during gamete production.[3] The reduction in viability is probable to the lack of lipid reserves distributed to the eggs.

Larval development can last from 15 to 35 days depending environmental conditions including salinity and temperature, as well as location. Larvea originating from Connecticut mature normally at 15–20 °C, though at 15 °C normal development occurs at salinities between 15 and 35 ppt and 20 at 35 ppt at 20 °C[4]. The first stage of development is the ciliated embryo, which in 24-hours for fertilization form the trochophore. At this point although mobile, it is still reliant on the yolk for nutrients. Characterized by a functional mouth and alimentary canal the veliger stage also has cilia which are used for filtering food as well as propulsion. A thin translucent shell is secreted by the shell gland forming the notable straight hinge of the prodissoconch I shell. The veliger continues to mature forming the prodissoconch II shell. In the end stage of veliger development photosensitive eye spots and elongated foot with a byssal gland are formed. Once the pediveliger is fully developed, its foot extends and makes contact with substrate. The initial contact with the substrate is loose, if the suitable the larva will metamorphoses into the juvenile form, plantigrade, and attach byssus threads. The mussel will remain in the state until reaching 1-1.5mm in length. This attachment is the prerequisite for the foundation for the blue mussel population. In sheltered environments large masses sometimes form beds which offer shelter and food for other invertebrates.

Blue mussels are filter feeders and play a vital role in estuaries by removing bacteria and toxins. 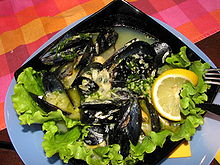 Mytilus edulis is commonly harvested for food throughout the world, from both wild and farmed sources. Mussels are a staple of many seafood dishes in various cuisines including Spanish (especially Galician), Portuguese, French, Dutch, Belgian and Italian. They are also commonly used as lab animals.

Predation of blue mussels is greatest during the 3 weeks it spends as a planktonic larva. During this stage it is susceptible to jellyfish and fish larvae through adults. Once the mussel metamorphoses the mussel is still restricted by predation, however only smaller mussels with thinner, weaker shells are victim. Once the shells becomes stronger, blue mussels are preyed upon by sea stars such as Asterias vulgaris as well as by several species of sea gulls. Small mussels are also eaten by the dog whelk, Nucella lapillus.[5]. The blue mussel is host to a wide range of parasites, but these parasites usually do not cause much damage.