Helix aspersa, known by the common name garden snail, is a species of land snail, a pulmonate gastropod that is one of the best-known of all terrestrial molluscs. The species has been placed in the genus Helix, in all sources between 1774 and 1988 and in most sources until recently. But in a number of sources since 1990[3] it has been placed in three other genera, depending on the classification in relation to Helix aperta and on the accepted interpretation of the ICZN Code's Article 1.3.2 for the Cornu problem.[4][5] For those who regard Cornu as available the name can be Cornu aspersum (if they do not like to classify it in Helix).[6][7][8] Those who do not regard Cornu as available, and do not like to classify the species in Helix, can select between Cantareus aspersus (this is the option for those who classify Helix aperta in the same genus as Helix aspersa, as done by Italian research teams and others)[9][10][11][12] and Cryptomphalus aspersus (for those who like to classify the two species in different genera, as done by Ukrainian and Russian research teams).[13][14][15][16]

Although this species is edible, it is often regarded as a pest in gardens and to agriculture, especially where it has been accidentally introduced. It is native to the Mediterranean area but has been spread by humans, both deliberately and accidentally, to numerous areas all over the world. 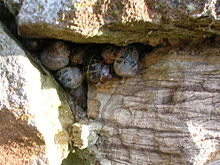 A hibernaculum on a doocot in Eglinton, Scotland

This species is native to the Mediterranean region (including Egypt[17]) and western Europe, from northwest Africa and Iberia east to Asia Minor, and north to the British Isles.

It comprises a set of north African endemic forms and subspecies that were described at the beginning of the 20th century, on the basis of shell characteristics. The most common one, Cornu aspersum aspersum (synonym Helix aspersa aspersa), has become very abundant in all human-disturbed habitats in regions with a Mediterranean, temperate and even subtropical climate.[18]

Cornu aspersum is a typically anthropochorous species; in other words this species has been spread to various geographical areas deliberately and /or accidentally by humans. It is nowadays widespread throughout the world, and occurs in in many zones that have climates differing from the original Mediterranean climate in which it first occurred. Its presence is reported on the American continents, as well as in Australia and in Asia. Because of this fact, the most likely explanation for resemblances between populations located on either side of the Mediterranean would be passive transport due to human activities. Transfers involving this species may have started in the Neolithic revolution (around 8500 BP). In the present time these introductions continue to occur, and in some cases give rise to catastrophic destruction of habitat.[18]

It is very widely introduced and naturalised elsewhere in the world[19][20] and its non-native distribution include other parts of Europe: Bohemia in the Czech Republic since 2008;[21] southern Africa, Australia, New Zealand, North America and southern South America.[22] It was introduced to California as a food animal in the 1850s and is now a notorious agricultural pest there, especially in citrus groves. Many areas have quarantines established for preventing the importation of the snail in plant matter. 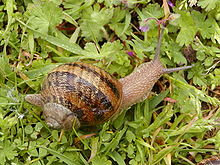 The adult bears a hard, thin calcareous shell 25–40 mm in diameter and 25–35 mm high, with four or five whorls. The shell is somewhat variable in color and shade but is generally dark brown or chestnut with yellow stripes, flecks, or streaks.

The body is soft and slimy, brownish-grey, and is retracted entirely into the shell when the animal is inactive or threatened. During dry and cold weather, the aperture of the shell is sealed with a thin membrane of dried mucus which is known as an epiphragm, which helps the snail retain moisture. The resultant quiescent periods are known as aestivation and hibernation respectively. When hibernating, Helix aspersa avoids ice formation by altering the osmotic components of its blood (or haemolymph), and can survive temperatures as low as -5°C.[23] During aestivation, the mantle collar has the unique ability to change its permeability to water.[24] In combination with an osmoregulatory mechanism similar to that seen during hibernation this allows Helix aspersa to survive several months of aestivation.

During times of activity the head and foot emerge. The head bears four tentacles, the upper two of which have eye-like light sensors, and the lower two of which are smaller, tactile and olfactory sensory structures. The tentacles can be retracted into the head. The mouth is located beneath the tentacles, and contains a chitinous radula which the snail uses to scrape and manipulate food particles. 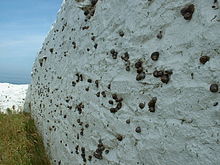 Hundreds of Helix aspersa on a wall

The garden snail is a herbivore and has a wide range of host plants (It feeds on plants only). It feeds on numerous types of fruit trees, vegetable crops, garden flowers, and cereals. It is a food source for many other animals, including small mammals, many bird species, lizards, frogs, centipedes, predatory insects, and predatory terrestrial snails.[25]

Helix aspersa can be used as an indicator of environmental contamination, as its shell acts as a site for deposition of toxic heavy metals, such as lead.[26]

Like other Pulmonata, Helix aspersa is a hermaphrodite, producing both male and female gametes. Reproduction is usually sexual, although self-fertilisation can occur.[27] During a mating session of several hours, two snails exchange sperm. The garden snail uses love darts during mating.

After about two weeks approximately 80 spherical pearly-white eggs are laid into crevices in the topsoil. Up to six batches of 80 eggs can be laid in a year.[28] The size of the egg is 4 mm.[29]

The young snails take one to two years to reach maturity.[20]

Parasites of Helix aspersa include: 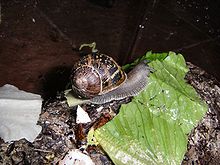 The snail's muscular foot contracts to move the animal, and secretes mucus to facilitate locomotion by reducing friction against the substrate.[20] It moves at a top speed of 1.3 centimetres per second[32] (47 meters per hour or ~50 yards per hour),[33] and has a strong homing instinct, readily returning to a regular hibernation site.[34]

The species is an agricultural and garden pest, an edible delicacy, and occasionally a household pet. In French cuisine, it is known as petit gris, and is served for instance in Escargot a la Bordelaise. The practice of rearing snails for food is known as heliciculture. For purposes of cultivation, the snails should be kept in a dark place in a wired cage with dry straw or dry wood. Coppiced wine-grape vines are often used for this purpose. During the rainy period the snails will come out of hibernation and release most of their mucus onto the dry wood/straw. The snails are then prepared for cooking. Their texture is slightly chewy.

There are a variety of snail control measures that gardeners and farmers can take to reduce damage. Traditional pesticides are still in use, as are many less toxic control options such as concentrated garlic or wormwood solutions. Copper metal is repellent to snails. A copper band around the trunk of a tree will prevent snails from climbing up and reaching the foliage and fruit.

The decollate snail (Rumina decollata) will capture and eat garden snails, so it is sometimes introduced as a biological pest control agent.

Recently, Helix aspersa has gained popularity as the chief ingredient in skin creams and gels (crema/gel de caracol) sold within the Latino community and used for wrinkles, scars, dry skin, and acne.[citation needed] 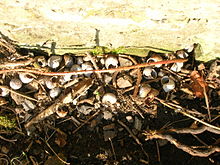