The National Geographic Society (NGS), headquartered in Washington, D.C. in the United States, is one of the largest non-profit scientific and educational institutions in the world. Its interests include geography, archaeology and natural science, the promotion of environmental and historical conservation, and the study of world culture and history. The National Geographic Society’s logo is a yellow portraitframe - rectangular in shape - which appears on the margins surrounding the front covers of its magazines and as its channel logo. 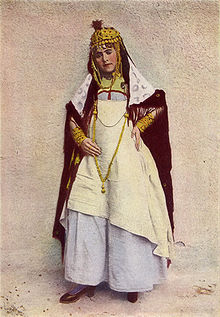 A dancer of the cafes, Algeria, 1917 photograph from the National Geographic Magazine

The National Geographic Society's historical mission is "to increase and diffuse geographic knowledge while promoting the conservation of the world's cultural, historical, and natural resources."[2] Its President and CEO since March 1998, John M. Fahey, Jr., says National Geographic's purpose is to inspire people to care about their planet. The Society is governed by a twenty-three member Board of Trustees composed of a group of distinguished educators, leading business executives, former governmental officials, and conservationists.

The organization sponsors and funds scientific research and exploration. The Society publishes an official journal, National Geographic Magazine, and other magazines, books, school products, maps, other publications, web and film products in numerous languages and countries around the world. It also has an educational foundation that gives grants to education organizations and individuals to enhance geography education.[3] Its Committee for Research and Exploration has given grants for scientific research for most of the Society's history and has recently awarded its 9,000th grant for scientific research, conducted worldwide and often reported on by its media properties.

Its various media properties reach about 360 million people around the world monthly.[4] National Geographic maintains a museum free for the public in its Washington, D.C. headquarters, and has helped to sponsor popular traveling exhibits such as the "King Tut" exhibit featuring magnificent artifacts from the tomb of the young Egyptian Pharaoh, which toured in several American cities, ending its U.S. showing at the Franklin Institute in Philadelphia. The Tut exhibit is currently in Atlanta.

Another National Geographic exhibit of "The Cultural Treasures of Afghanistan" opened in May 2008 at the National Gallery of Art in Washington. The exhibit will travel over the next eighteen months to the Houston Museum of Fine Arts, the Asian Art Museum in San Francisco, and the Metropolitan Museum in New York City. In November 2008, National Geographic opened a major retail store on Regent Street in London. 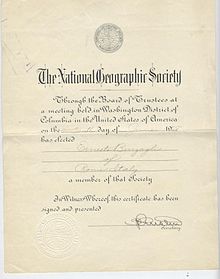 The official diploma presented to Italian Admiral Ernesto Burzagli when he was awarded membership in the National Geographic Society in 1928.

The National Geographic Society began as a club for an elite group of academics and wealthy patrons interested in travel.[5] On January 13, 1888, 33 explorers and scientists gathered at the Cosmos Club, a private club then located on Lafayette Square in Washington, D.C., to organize "a society for the increase and diffusion of geographical knowledge." After preparing a constitution and a plan of organization, the National Geographic Society was incorporated two weeks later on January 27. Gardiner Greene Hubbard became its first president and his son-in-law, Alexander Graham Bell, eventually succeeded him in 1897 following his death. In 1899 Bell's son-in-law Gilbert Hovey Grosvenor was named the first full-time editor of National Geographic Magazine and served the organization for fifty-five years (1954), and members of the Grosvenor family have played important roles in the organization since.

Bell and his son-in-law, Grosvenor, devised the successful marketing notion of Society membership and the first major use of photographs to tell stories in magazines. The current Chairman of the Board of Trustees of National Geographic is Gilbert Melville Grosvenor, who received the Presidential Medal of Freedom in 2005 for the Society's leadership for Geography education. In 2004, the National Geographic Headquarters in Washington, D.C. was one of the first buildings to receive a "Green" certification[6] from Global Green USA.[7] The National Geographic received the prestigious Prince of Asturias Award for Communications and Humanity in October 2006 in Oviedo, Spain. 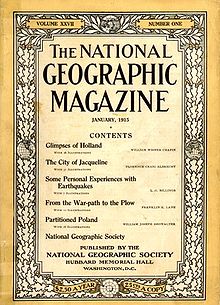 There are 12 monthly issues of National Geographic per year, plus at least four additional map supplements. On rare occasions, special issues of the magazine are also created. The magazine contains articles about geography, popular science, world history, culture, current events and photography of places and things all over the world and universe. The National Geographic magazine is currently published in 32 language editions in many countries around the world. Combined English and other language circulation is nearly nine million monthly with more than fifty million readers monthly.

In addition to its flagship magazine, the Society publishes six other periodicals in the United States:

The Society has published maps, atlases, and numerous books. It also lends its license to other publishers, for example to Thames & Kosmos for a line of science kits.

National Geographic Films, a wholly owned taxable subsidiary of the National Geographic Society, has also produced a feature film based on the diary of a Russian submarine commander starring Harrison Ford in K-19: The Widowmaker, and most recently retooling a French-made documentary for U.S. distribution with a new score and script narrated by Morgan Freeman called March of the Penguins, which received an Academy Award for the Best Documentary in 2006. After a record $77 million theatrical gross in the United States, over four million DVD copies of March of the Penguins have been sold. National Geographic Films launched a new feature film in July called Arctic Tale, featuring the story of two families of walrus and polar bears. Queen Latifah is the narrator of this film. Inspired by a National Geographic Magazine article, National Geographic opened in October 2007 a 3-D large format and Reality 3-D film called Sea Monsters, with a musical score by Peter Gabriel. National Geographic Films is co-producing with Edward Norton and Brad Pitt the 10-hour mini series of Steven Ambrose's award-winning Undaunted Courage: Meriwether Lewis, Thomas Jefferson and the Opening of the American West for HBO.

Support for research and projects 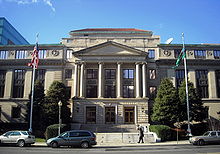 The Society has helped sponsor many expeditions and research projects over the years, including:

The Society supports many socially based projects including AINA, a Kabul-based organization dedicated to developing an independent Afghan media, which was founded by one of the Society's most famous photographers, Reza.

The Society also sponsors the National Geographic Bee, an annual geographic contest for American middle-school students. More than four million students a year begin the geography competition locally, which culminates in a national competition of the winners of each state each May in Washington, D.C. Alex Trebek has moderated the final competition since the competition began some seventeen years ago. Every two years, the Society conducts an international geography competition of competing teams from all over the world. The most recent was held in Mexico City on July 15, 2009, and had representatives from 15 national teams. The team from Canada emerged as the winner, with teams from the United States and Poland in second and third place. 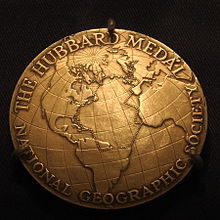 The Hubbard Medal is awarded by the National Geographic Society for distinction in exploration, discovery, and research. The medal is named for Gardiner Greene Hubbard, the first National Geographic Society president. The Hubbard Medal has been presented 34 times as of 2000, the most recent award going posthumously to Matthew Henson, Robert Peary's fellow Arctic explorer.[10]

Not to be confused with IEEE Alexander Graham Bell Medal.

The National Geographic Society also awards, rarely, the Alexander Graham Bell Medal, for exceptional contributions to geographic research. The award is named after Alexander Graham Bell, scientist, inventor and the second president of the NGS. Up to mid-2011, the medal has been twice presented:[11][12]

In their book Reading National Geographic, Catherine Lutz and Jane Collins argue that the D.C.-based National Geographic Society is intimately tied to the American establishment and "cultivates ties to government officials and corporate interests".[13] Tamar Rothenberg also wrote that the Society's flagship publication National Geographic, as a part of mainstream popular culture, has historically helped to articulate a particularly American identity in opposition to "both old Europe and primitive non-Western regions... an identity of civic and technological superiority but yet, a distinctly benign and friendly identity".[14]

Lutz and Collins described how National Geographic photographs were sometimes electronically manipulated.[15] In one photo of bare-breasted Polynesian women, their skin color was darkened.[15] The book also documented how NG photographers have encouraged their subjects to change costumes when their clothing was seen as "too drab" for the magazine.[15] Summarizing an analysis of NG photographs from 1950–1986, the authors argued the following themes: "The people of the third and fourth worlds are portrayed as exotic; they are idealized; they are naturalized and taken out of all but a single historical narrative; and they are sexualized. Several of these themes wax and wane in importance through the postwar period, but none is ever absent."[16]

Photos, maps, and other images