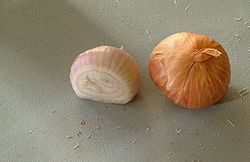 A bulb is a short stem with fleshy leaves or leaf bases.[1] The leaves often function as food storage organs during dormancy.

A bulb's leaf bases, known as scales, generally do not support leaves, but contain food reserves to enable the plant to survive adverse conditions. At the center of the bulb is a vegetative growing point or an unexpanded flowering shoot. The base is formed by a stem, and plant growth occurs from this basal plate. Roots emerge from the underside of the base, and new stems and leaves from the upper side. Tunicate bulbs have dry, membranous outer scales that protect the continuous lamina of fleshy scales.[2] Species in the genera Allium, Hippeastrum, Narcissus, and Tulipa all have tunicate bulbs. Non-tunicate bulbs, such as Lilium and Fritillaria species, lack the protective tunic and have looser scales.[3]

Other types of storage organs (such as corms, rhizomes, and tubers) are sometimes erroneously referred to as bulbs. The technical term for plants that form underground storage organs, including bulbs as well as tubers and corms, is geophyte. Some epiphytic orchids (family Orchidaceae) form above-ground storage organs called pseudobulbs, that superficially resemble bulbs.

Nearly all plants that form true bulbs are monocotyledons, and include:

Oxalis, in the family Oxalidaceae, is the only dicotyledon genus that produces true bulbs.[4]

Bulbous plant species cycle through vegetative and reproductive growth stages; the bulb grows to flowering size during the vegetative stage and the plant flowers during the reproductive stage. Certain environmental conditions are needed to trigger the transition from one stage to the next, such as the shift from a cold winter to spring.[2]

Some lilies form small bulbs, called bulbils in their leaf axils. Several members of the onion family, Alliaceae, including Allium sativum (garlic), form bulbils in their flower heads, sometimes as the flowers fade, or even instead of the flowers. The so-called Tree onion (Allium cepa var. proliferum) forms small onions which are large enough for pickling.

Some ferns, such as Hen and Chicken Fern produce new plants at the tips of the fronds' pinnae, which are sometimes referred to as bulbils.

Synonyms:
Scaly bud (like those of the onion and the tulip) / Protuberance