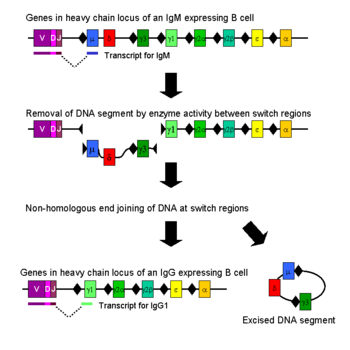 Immunoglobulin class switching (or isotype switching or isotypic commutation or class switch recombination(CSR)) is a biological mechanism that changes a B cell's production of antibody from one class to another, for example, from an isotype called IgM to an isotype called IgG. During this process, the constant region portion of the antibody heavy chain is changed, but the variable region of the heavy chain stays the same (the terms "constant" and "variable" refer to changes or lack thereof between antibodies that target different epitopes). Since the variable region does not change, class switching does not affect antigen specificity. Instead, the antibody retains affinity for the same antigens, but can interact with different effector molecules.

Class switching occurs after activation of a mature B cell via its membrane-bound antibody molecule (or B cell receptor) to generate the different classes of antibody, all with the same variable domains as the original antibody generated in the immature B cell during the process of V(D)J recombination, but possessing distinct constant domains in their heavy chains.[1]

Naïve mature B cells produce both IgM and IgD, which are the first two heavy chain segments in the immunoglobulin locus. After activation by antigen, these B cells proliferate. If these activated B cells encounter specific signaling molecules via their CD40 and cytokine receptors (both modulated by T helper cells), they undergo antibody class switching to produce IgG, IgA or IgE antibodies. During class switching, the constant region of the immunoglobulin heavy chain changes but the variable regions, and therefore antigenic specificity, stay the same. This allows different daughter cells from the same activated B cell to produce antibodies of different isotypes or subtypes (e.g. IgG1, IgG2 etc.).[2]

The order of the heavy chain exons are as follows:

Class switching occurs by a mechanism called class switch recombination (CSR) binding. Class switch recombination is a biological mechanism that allows the class of antibody produced by an activated B cell to change during a process known as isotype or class switching. During CSR, portions of the antibody heavy chain locus are removed from the chromosome, and the gene segments surrounding the deleted portion are rejoined to retain a functional antibody gene that produces antibody of a different isotype. Double-stranded breaks are generated in DNA at conserved nucleotide motifs, called switch (S) regions, which are upstream from gene segments that encode the constant regions of antibody heavy chains; these occur adjacent to all heavy chain constant region genes with the exception of the δ-chain. DNA is nicked and broken at two selected S-regions by the activity of a series of enzymes, including Activation-Induced (Cytidine) Deaminase (AID), uracil DNA glycosylase and apyrimidic/apurinic (AP)-endonucleases.[3][4] The intervening DNA between the S-regions is subsequently deleted from the chromosome, removing unwanted μ or δ heavy chain constant region exons and allowing substitution of a γ, α or ε constant region gene segment. The free ends of the DNA are rejoined by a process called non-homologous end joining (NHEJ) to link the variable domain exon to the desired downstream constant domain exon of the antibody heavy chain.[5] In the absence of non-homologous end joining, free ends of DNA may be rejoined by an alternative pathway biased toward microhomology joins.[6] With the exception of the μ and δ genes, only one antibody class is expressed by a B cell at any point in time.

T cell cytokines are responsible for class switching in mouse (Table 1) and human (Table 2).[7] [8] These cytokines may have suppressive effect on production of IgM.