Microsoft Encarta was a digital multimedia encyclopedia published by Microsoft Corporation from 1993 to 2009. As of 2008[update], the complete English version, Encarta Premium, consisted of more than 62,000 articles,[1] numerous photos and illustrations, music clips, videos, interactive contents, timelines, maps and atlas, and homework tools, and was available on the World Wide Web by yearly subscription or by purchase on DVD or multiple CDs. Many articles could also be viewed online free of charge, a service supported by advertisements.[2]

Microsoft published similar encyclopedias under the Encarta trademark in various languages, including German, French, Spanish, Dutch, Italian, Portuguese and Japanese. Localized versions may contain contents licensed from available national sources and may contain more or less content than the full English version. For example, the Dutch version had content from the Dutch Winkler Prins encyclopedia.

After the successes of Compton's Multimedia Encyclopedia (1989) and The New Grolier Multimedia Encyclopedia (1992),[5] Microsoft initiated Encarta by purchasing non-exclusive rights to the Funk & Wagnalls Encyclopedia, incorporating it into its first edition in 1993. (Funk & Wagnalls continued to publish revised editions for several years independently of Encarta, but then ceased printing in the late 1990s.) Previously having been referred to by the codename "Gandalf,"[6][7][8][9] the name Encarta was created for Microsoft by an advertising agency.[10] Microsoft had originally approached Encyclopædia Britannica, the gold standard of encyclopedias for over a century, in the 1980s, but it declined, believing its print media sales would be hurt; however, the Benton Foundation was forced to sell Encyclopædia Britannica, Inc. at below book value in 1996 when the print sales could no longer compete with Encarta and the Microsoft distribution channel which focused on bundling[11] copies with new computer systems.[12]

Microsoft introduced several regional versions of Encarta translated into languages other than English. For example, the Brazilian Portuguese version was introduced in 1999 and suspended in 2002.[13] The Spanish version is somewhat smaller than the English one, at 42,000 articles.

In July 2006, Websters Multimedia, a Bellevue, Washington subsidiary of London-based Websters International Publishers, took over maintenance of Encarta from Microsoft.[14] The last version is Encarta Premium 2009, released in August 2008.[1]

Microsoft announced in March 2009 that it would cease to sell Microsoft Student and all editions of Encarta Premium software products worldwide by June 2009, citing changes in the way people seek information and in the traditional encyclopedia and reference material market as the key reasons behind the termination.[3] Updates for Encarta were offered until October 2009.[3] Additionally, MSN Encarta web sites were discontinued around October 31, 2009, with the exception of Encarta Japan which was discontinued on December 31, 2009. Existing MSN Encarta Premium (part of MSN Premium) subscribers were refunded.[3] Encarta's closing is widely attributed to competition from the much larger online encyclopedia, Wikipedia.[15][16][17]

Encarta's standard edition[18] included approximately 50,000 articles, with additional images, videos and sounds. The premium editions contain over 62,000 articles and other multimedia content, such as 25,000 pictures and illustrations, over 300 videos and animations, and an interactive atlas with 1.8 million locations. Its articles are integrated with multimedia content and may have a collection of links to websites selected by its editors. Encarta's articles in general are less lengthy and more summarized than the printed version of Encyclopaedia Britannica or the online Wikipedia. Like most multimedia encyclopedias, Encarta's articles tend to provide an overview of the subject rather than an exhaustive coverage and can only be viewed one at a time.

A sidebar may display alternative views, essays, journals or original materials relevant to the topic. For example, when reading about computers, it features annals since 1967 of the computer industry. Encarta also supports closed captioning for the hearing impaired. A separate program, called Encarta Research Organizer was included in early versions for gathering and organizing information and constructing a Word document-based report. Later versions included Encarta Researcher which was a browser plugin to organize information from Encarta articles and web pages into research projects. Content copied from Encarta is appended with a copyright boilerplate message after the selection. The user interface allows viewing content with only images, videos, sounds, animations, 360-degree views, virtual tours, charts and tables or only interactivities.

Encarta 2000 and later have Map Treks which are tours of geographic features and concepts. Microsoft had a separate product known as Encarta Africana which was an encyclopedia of black history and culture. It was integrated into the standard Encarta Reference suite starting with the 2001 version.[19] Encarta 2002 and onwards feature 3D Virtual Tours of ancient structures, for example the Acropolis; 2D panoramic images of world wonders or major cities; and a virtual flight feature which allows users to fly a virtual airplane over a coarsely generated artificial landscape area. Version 2002 also introduced the ability to install the entire encyclopedia locally to the hard disk drive to prevent frequent swapping of discs.

Encarta also includes a trivia game called "MindMaze" (accessible through Ctrl+Z) in which the player explores a castle by answering questions whose answers can be found in the encyclopedia's articles. There is also a Geography Quiz and several other games and quizzes, some quizzes also in Encarta Kids.

For years, Encarta came in three primary software editions: Basic, Premium, and Reference Library (price and features in that order.) Beginning with Encarta 2006, however, when Websters Multimedia took over its maintenance, Encarta became a feature of Microsoft Student as the premier Microsoft educational software program. Although it is possible to purchase only the Encarta encyclopedia separately, Microsoft Student bundles together Encarta Premium with Microsoft Math (a graphing calculator program) and Learning Essentials, which provides templates for Microsoft Office. In addition, the Reference Library was discontinued, absorbed into a newer, more comprehensive Premium package. Encarta's user interface is shared with Microsoft Student, and has been streamlined to reduce clutter with only a Search box which returns relevant results; however it is no longer possible to simply browse all the encyclopedia articles alphabetically.

The dynamic maps are generated with the same engine that powered Microsoft MapPoint software. The map is a virtual globe that one can freely rotate and magnify to any location down to major streets for big cities. The globe has multiple surfaces displaying political boundaries, physical landmarks, historical maps and statistical information. One can selectively display statistical values on the globe surface or in a tabular form, different sized cities, various geological or man-made features and reference lines in a map.

The maps contain hyperlinks to related articles ("Map Trek") and also supports a "Dynamic Sensor" that provides the latitude, longitude, place name, population and local time for any point on the globe. Encarta also generates a visible-light moon atlas with names of major craters and hyperlinks. However, it does not include a planetarium, but instead has a small interactive constellation-only map.

In addition to database generated maps, many other illustrative maps in Encarta ("Historical Maps") are drawn by artists. Some more advanced maps are interactive: for example, the large African map for Africana can display information such as political boundaries or the distribution of African flora.

When Encarta was released as part of the "Reference Suite" in 1998 (through to 2000), Microsoft bundled "Microsoft Bookshelf" with the other programs (Encarta Encyclopedia 98 Deluxe Edition, Encarta Desk Atlas, Encarta Virtual Globe 98, Encarta World English Dictionary and Encarta Research Organizer). However, this was redundant.

Bookshelf was discontinued in 2000, and in later Encarta editions (Encarta Suite 2000 and onwards), Bookshelf was replaced with a dedicated Encarta Dictionary, a superset of the printed edition.

There was some controversy over the decision, since the dictionary lacks the other books provided in Bookshelf which many found to be a useful reference, such as Columbia Dictionary of Quotations (replaced with a quotations section in Encarta that links to relevant articles and people) and an Internet Directory (although now a moot point since many of the sites listed in offline directories no longer exist).

Robert McHenry, while Editor-in-Chief of the Encyclopædia Britannica, criticized[20] Encarta for differences in factual content between national versions of Encarta, accusing Microsoft of "pandering to local prejudices" instead of presenting subjects objectively.[21] An article written by Bill Gates addressed the nature of writing encyclopedia for different regions.[22] 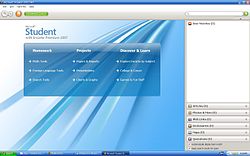 Before the emergence of the World Wide Web for information browsing, Microsoft recognized the importance of having an engine that supported a multimedia markup language, full text search, and extensibility using software objects. The hypertext display, hyperlinking and search software was created by a team of CD-ROM Division developers in the late 1980s who designed it as a generalized engine for uses as diverse as interactive help, document management systems and as ambitious as a multimedia encyclopedia. Encarta was able to use various Microsoft technologies because it was extensible with software components for displaying unique types of multimedia information. For example, a snap in map engine is adapted from its MapPoint software. More information on the hypertext and search engine used by Encarta may be found in the Microsoft Bookshelf article.

Unlike Microsoft Office, Encarta disc version only supports Microsoft Windows with Microsoft's Internet Explorer. Encarta 98 was the last version to be released for the Macintosh. However, people who use other operating systems could still access Encarta's website.

Encarta uses database technologies to generate much of its multimedia content. For example, Encarta generates each zoomable map from a global geographic information system database on demand.

When a user uses the copy and paste function of Microsoft Windows on Encarta on more than five words, Encarta automatically appends a copyright boilerplate message after the paste.

Early in 2005, the online Encarta started to allow users to suggest changes to existing articles.[23] Articles were not immediately updated. Instead, user feedback was submitted to Encarta's editors for review, copyediting, and approval.[24] Contributors were not paid for their submissions.[25]

Encarta's content was accessible using a conversational interface on Windows Live Messenger via the MSN Bot "Encarta Instant Answers".[26] The bot could answer many encyclopedia related questions directly in the IM window. It used short sentences from the Encarta website, and sometimes displays full articles in the Internet Explorer-based browser on the right. It also could complete simple mathematical and advanced algebra problems. This service was also available in German,[27] Spanish,[28] French[29] and Japanese.[30]

Each summer, Microsoft published a new version of Encarta. However, despite the inclusion of news-related and some supplementary articles, Encarta's contents had not been changed substantially in its later years. Besides the yearly update, the installed offline copy could be updated over the Internet for a certain period for free depending on the edition. Some articles (usually about 2000) were updated to reflect important changes or events. When the update period expired, an advertisement prompting to upgrade to the new version was displayed to the user occasionally.