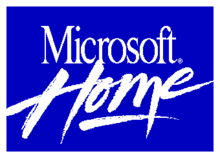 Microsoft Home is a defunct line of software applications and personal hardware products published by Microsoft. Microsoft Home software titles first appeared in the middle of 1993. These applications were designed to bring multimedia to Microsoft Windows and Macintosh personal computers. With more than 60 products available under the Microsoft Home brand by 1994, the company's push into the consumer market took off. Microsoft also announced at that time Microsoft Plus!, an add-on enhancement package for Windows, which was continued until the Windows 2000 era. The range of home software catered for many different consumer interests from gaming with Microsoft Arcade and Entertainment Packs to reference titles such as Microsoft Encarta, Bookshelf and Cinemania. Shortly after the release of Microsoft Windows 95, the company began to reduce the price of Microsoft Home products and by the rise of the World Wide Web by 1998, Microsoft began to phase out the line of software. Today, Microsoft Home products can still be found on eBay, Amazon.com and in charity shops every once in a while, and they are beginning to fetch collector prices. However, some of them are available for download (albeit illegally) from various Internet websites dealing with abandonware.

Microsoft Home produced software for all different uses and environments. The products are divided into five categories: Reference & Exploration, Entertainment, Kids, Home Productivity and Sounds, Sights & Gear. The category in which the product was divided is identifiable by the package. Generally, Reference & Exploration products have a purple base color, Entertainment has a black base color, Kids has a yellow base color, Home Productivity has a green color and Sounds, Sights & Gear products have a grey or red base color. Note that many applications were developed in conjunction with other reputable software and reference companies. For example, Microsoft Musical Instruments was developed with Dorling Kindersley.

Microsoft Home Reference products brought information to Multimedia Personal Computers - it was an effective way of presenting and exploring information before the World Wide Web became mainstream. These products were embellished with hyperlink navigation systems, which were relatively new at this time. Most of these products were released on CD-ROM, giving the software the ability to display high-resolution graphics and animations, and play high-quality waveforms and MIDI files. These products proved that personal computers would revolutionize the way that we find and explore information.

In the early 1990s, games on personal computers generally ran on the now obsolete MS-DOS operating system. However, with the introduction of Microsoft Windows 3.1x in 1992, Microsoft Home published several entertainment applications that implemented the new technologies of Microsoft Windows. Furthermore, these applications encouraged the computer gamers of the time to migrate from MS-DOS to Microsoft Windows. This transition permitted better use of computer graphics, revolutionized game programming and resulted in a more realistic gaming experience[citation needed]. For example, Microsoft Windows Entertainment Pack Games have remained a classic for computer gamers, ever since their development in the early 1990s[citation needed].

The Microsoft Kids division produced educational software aimed at children during the 1990s. Their products feature a purple-skinned character named McZee who wears wacky attire and leads children through the fictional town of Imaginopolis, where each building or room is a unique interface to a different part of the software. He is accompanied by a different partner in each software title.

Microsoft Home's software for kids was popular not only for home use, but also in school and educational institutions. Microsoft proved that the personal computer should not be daunting, but can be used by the whole family.  Tying in with the TV series, Microsoft Scholastic's The Magic School Bus was a highly successful series that continued to be sold after Microsoft Home's kids range of software turned into a subsidiary called Microsoft Kids.