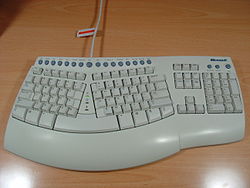 The Microsoft Natural Keyboard is a computer keyboard that was introduced by Microsoft in 1994. The keyboard was a split keyboard with each half of the keyboard separated and tilted upwards and down from the center of the keyboard. This key arrangement was ergonomically designed to prevent carpal tunnel syndrome and other repetitive strain injuries associated with typing for long periods of time. The keyboard also helps to ensure correct posture while sitting at the computer.

Although it was not the first ergonomic keyboard, it was the first that was widely available and reasonably priced. This keyboard has gained wide popularity.[vague]

Microsoft introduced the Natural Keyboard Elite in 1998 and the Natural Keyboard Pro in 1999 as upgraded replacements for the original Natural Keyboard. The Elite features a nonstandard layout of the key block normally found above the cursor keys. Another common criticism of the Elite is that the arrow keys' inverted-T layout has been changed into a cross-like layout, with left/right arrows keys side by side and up/down keys bracketing them from above and below, increasing the distance between the vertical keys.

The Natural Keyboard Pro retained the original inverted-T layout of the cursor keys, and gained a row of program shortcut keys along the top edge of the board. In versions of Windows prior to Windows Vista, Microsoft's Intellitype software is required to configure the behavior of the shortcut keys. Vista and Windows 7 have the ability to customize shortcut key behavior without additional software when using the "internet keyboard" keyboard layout. Some other modern operating systems, such as FreeBSD and most Linux distributions, have comparable configuration options.

The Natural Keyboard Pro also included an internal two-port USB hub, which was commonly used to connect other input devices such as a mouse or trackball.

Another significant change was that made to the feet of the keyboard. While the original Microsoft Natural Keyboard had feet in the front, the Elite and its successors have their feet in the back.

In 2004, Microsoft introduced the Wireless Natural MultiMedia Keyboard, which introduced a row of customizable buttons above the function keys for launching applications or controlling play of music. A common criticism of this keyboard is the F Lock key located right beside F12, which toggles the functions keys from sending normal signals or common task signals such as Undo Redo, Open etc. The primary problem is that the default state of the F Lock is "disabled" meaning that the keyboard normally overrides the standard F-functions and instead attempts to perform the "enhanced" functions theoretically enabled by the software (which of course assumes, often incorrectly, that the user desires these enhanced functions and/or has installed the optional software.) It is not possible to disable this toggle either through the bundled software or by choosing not to install the software. Without the software installed, the F keys will do nothing, and toggling them back to normal by using the F Lock has been found by some to be unreliable as the keyboard will often randomly and inexplicably "untoggle" the F Lock key. See here for a method to disable the F-lock feature. Another common criticism is that although the bunched arrow keys of previous generation has been fixed by returning to the standard inverted T layout, the Home/End/Del/Ins/Page up/down set has been changed to 3x2 vertical layout, with the Insert key moved to the "PrtScn/SysRq" key, and del key expanded.

In September 2005, Microsoft introduced the Natural Ergonomic Keyboard 4000. This keyboard provides a significantly changed ergonomic design, an integrated leatherette wrist rest and a "hump" in the middle of the keyboard that ensures that the wrist angle is correct. It also ships with a removable front stand that allows the fingers to drop naturally onto the keys without any bending of the wrist. Additionally, the home/end key location set has been fixed by returning to the standard 2×3 horizontal rectangular layout. The F Lock key now defaults to "on", providing the original function key features rather than the new "enhanced" functions, and retains its setting across reboots. The 4000 is also significantly quieter to type on. With this model, there is less of the distinctive "click clack" noise that is common with older keyboards. The space bar, however, has been reported by several reviewers to be unusually noisy and difficult to depress.[1][2][3][4] Unlike its predecessor the Natural Pro, the 4000 does not include USB ports for additional devices such as a mouse.

With most Microsoft keyboards, software (Microsoft IntelliType) is bundled for both Mac OS X and Windows, allowing users to customize the function keys and modifier keys fairly extensively.

The Natural Ergonomic Keyboard claimed life of one million actuations for each QWERTY key.[5]