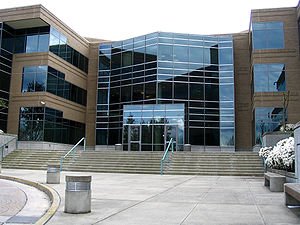 Microsoft Corporation (NASDAQ: MSFT, NYSE: MSFT) is an American public multinational corporation headquartered in Redmond, Washington, USA that develops, manufactures, licenses, and supports a wide range of products and services predominantly related to computing through its various product divisions. Established on April 4, 1975 to develop and sell BASIC interpreters for the Altair 8800, Microsoft rose to dominate the home computer operating system market with MS-DOS in the mid-1980s, followed by the Microsoft Windows line of operating systems. Microsoft would also come to dominate the office suite market with Microsoft Office. The company has diversified in recent years into the video game industry with the Xbox and its successor, the Xbox 360 as well as into the consumer electronics and digital services market with Zune, MSN and the Windows Phone OS.

The company's initial public offering was held on March 14, 1986. The stock, which eventually closed at US$27.75 a share, peaked at $29.25 a share shortly after the market opened for trading. After the offering, Microsoft had a market capitalization of $519.777 million.[1] Microsoft has subsequently acquired 146 companies, purchased stakes in 61 companies, and made 25 divestments. Of the companies that Microsoft has acquired, 107 were based in the United States. Microsoft has not released financial details for most of these mergers and acquisitions.

Since Microsoft's first acquisition in 1987, it has purchased an average of six companies a year. The company has purchased more than ten companies a year since 2005, and it acquired 18 firms in 2006, the most in a single year, including Onfolio, Lionhead Studios, Massive Incorporated, ProClarity, Winternals Software, and Colloquis. Microsoft has made five acquisitions worth over one billion dollars: Skype (2011), aQuantive (2007), Fast Search & Transfer (2008), Navision (2002), and Visio Corporation (2000).

Microsoft has also purchased several stakes valued at more than a billion dollars. It obtained an 11.5% stake in Comcast for $1 billion, a 22.98% stake in Telewest Communications for $2.263 billion, and a 3% stake in AT&T for $5 billion. Among Microsoft's divestments, in which parts of the company are sold to another company, only Expedia, Inc. was sold for more than a billion dollars; USA Networks purchased the company on February 5, 2002 for $1.372 billion.

Microsoft's first acquisition was Forethought on June 29, 1987. Forethought was founded in 1983 and developed a presentation program that would later be known as Microsoft PowerPoint.[2]

On December 31, 1997, Microsoft acquired Hotmail for $500 million, its largest acquisition at the time, and integrated Hotmail into its MSN group of services.[3] Hotmail, a free webmail service founded in 1996 by Jack Smith and Sabeer Bhatia,[4] had more than 8.5 million subscribers earlier that month.[5]

Microsoft acquired Seattle-based Visio Corporation on January 7, 2000 for $1.375 billion. Visio, a software company, was founded in 1990 as Axon Corporation, and had its initial public offering in November 1995.[6] The company developed the diagramming application software, Visio, which was integrated into Microsoft's product line as Microsoft Visio after its acquisition.

Microsoft purchased aQuantive, an advertising company, on August 13, 2007 for $6.333 billion. Before the acquisition, aQuantive was ranked 14th in terms of revenue among advertising agencies worldwide. aQuantive had three subsidiaries at the time of the acquisition: Avenue A/Razorfish, one of the world's largest digital agencies,[9] Atlas Solutions, and DRIVE Performance Solutions.[10] Microsoft acquired the Norwegian enterprise search company Fast Search & Transfer on April 25, 2008 for $1.191 billion to boost its search technology.[11]