Windows 3.1x is a series of 16-bit operating systems produced by Microsoft for use on personal computers. The series began with Windows 3.1, which was first sold during March 1992 as a successor to Windows 3.0. Further editions were released between 1992 and 1994 until the series was superseded by Windows 95. 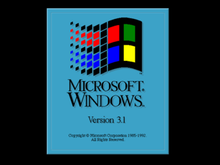 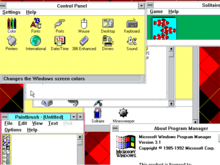 Windows 3.1 showing some of the personalisation options available. 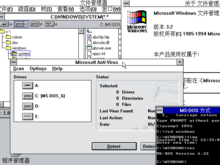 Windows 3.1 (originally codenamed Janus,[citation needed] of which two betas were published), released on April 6, 1992, includes a TrueType font system (and a set of highly legible fonts), which effectively made Windows a viable desktop publishing platform for the first time. Similar functionality was available for Windows 3.0 through the Adobe Type Manager (ATM) font system from Adobe.

Windows 3.1 was designed to have backward compatibility with older Windows platforms. As with Windows 3.0, version 3.1 had File Manager and Program Manager, but unlike all previous versions, Windows 3.1 and later support 32-bit disk access, cannot run in real mode, and included Minesweeper instead of Reversi (though Reversi was included in some copies).

Windows 3.1 Multimedia PC Version (Beta only, released Nov 1992 — codenamed Bombay) Included a media viewer, and the ability to play video files. It was targeted to the new multi-media PC and included sound and video integration with CD-ROM support.

A special version named Windows 3.1 for Central and Eastern Europe was released that allowed the use of Cyrillic and had fonts with diacritical marks characteristic of Central and Eastern European languages. Microsoft introduced its own codepage (Windows-1250) and supported its use in violation of many countries' ISO standards (e.g., the official Polish codepage is ISO-8859-2, which was ignored by Microsoft but is supported by contemporary Internet Explorer versions). Similarly, Microsoft also released Windows 3.1J with support for the Japanese language, which shipped 1.46 million copies in its first year on the market (1993) in Japan[1].

On December 31, 1993, Microsoft released an update for Windows 3.1 known as Windows 3.11. Thus, Windows 3.11 is not a standalone version of Windows, but rather a software update from Windows 3.1, much like modern Windows service packs. For those who did not own Windows 3.1, full disk sets of Windows 3.11 were available at the time.[citation needed]

Modular Windows is a special version of Windows 3.1, designed to run on the Tandy Video Information System.

Windows 3.2 was generally sold by computer manufacturers with a ten-disk version of MS-DOS that also had Simplified Chinese characters in basic output and some translated utilities. 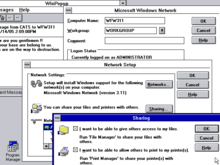 Network capabilities of Windows for Workgroups 3.11

Windows for Workgroups is an extension that allowed users to share their resources and to request those of others without a centralized authentication server. It used the SMB protocol over NetBIOS.

Windows for Workgroups 3.1 (originally codenamed Winball and later Sparta), released in October 1992[3], features native networking support. Windows for Workgroups 3.1 is an extended version of Windows 3.1 that comes with SMB file sharing support via the NetBIOS based NBF and/or IPX network transport protocols, includes the Hearts card game, and introduced VSHARE.386, the Virtual Device Driver version of the SHARE.EXE Terminate and Stay Resident program.

A Winsock package was required to support TCP/IP networking in Windows 3.x. Usually third-party packages were used, but in August 1994, Microsoft released an add-on package (codenamed Wolverine) that provided TCP/IP support in Windows for Workgroups 3.11. Wolverine was a 32-bit stack (accessible from 16-bit Windows application via WinSock thunks), which gave it superior performance to most of the third-party TCP/IP Windows stacks available. However, it was only compatible with Windows for Workgroups 3.11, and lacked support for dial-up. The Wolverine stack was an early version of the TCP/IP stack that would later ship with Windows 95, and provided an early testbed for the 16-to-32-bit compatibility layer that was crucial to Windows 95's success.

Video for Windows was first introduced in November 1992 as a reaction to Apple Computer's QuickTime technology which added digital video to the Macintosh platform. Costing around $200[6], the software included editing and encoding programs for use with video input boards. A runtime version for viewing videos only was also made available. Originally released as a free add-on to Windows 3.1 and Windows 3.11, it then became an integral component of Windows 95 and later. Like QuickTime there were three components in Video for Windows. The technology introduced a file format designed to store digital video, Audio Video Interleave (AVI). The technology provided an application programming interface that allowed software developers working on the Windows platform to add the ability to play or manipulate digital video to their own applications. Lastly, it included a suite of software for playing and manipulating digital video.

Windows 3.1x was given limited compatibility with the then-new 32-bit Windows API used by Windows NT by another add-on package, Win32s. There was rumor that Microsoft did not want to increment any mainstream Windows 3.1x version to something like "Windows 3.2" because it could be confused with the Win32 API or otherwise distract consumers from upgrading to a "real 32-bit OS" like the then-upcoming Windows 95 was, though Windows NT 3.1 and 3.5 were both 32-bit operating systems that looked similar in appearance. For testing of the new Win32s functions the game FreeCell was included.

Windows 3.1x introduced new possibilities for applications, especially multimedia applications. During this era, Microsoft developed a new range of software that was implemented on this operating environment, called Microsoft Home, Microsoft Bob being one of the programs.

If Program Manager is started under Windows XP Service Pack 2 and later, it does not appear to run, but when a .grp file created for Windows 3.1 is processed, it converts the .grp file contents to a Start Menu folder.

Microsoft released versions of Internet Explorer from 2.0 up to the first release of version 5.0 for Windows 3.1.

Microsoft began a television advertising campaign for the first time on March 1, 1992. The advertisements, developed by Ogilvy & Mather, were designed to introduce a broader audience to Windows[8]. Windows 3.1 was shipped worldwide on April 6, 1992, and reached three million sales two months later[9]. The year of Windows 3.1's release was successful for Microsoft, which was named the "Most Innovative Company Operating in the U.S." by Forbes Magazine, while Windows became the most widely-used GUI-based operating environment[10].

The installer to the beta release used code that checked whether it was running on Microsoft-licensed DOS or another DOS operating system (such as DR-DOS). The code ran several functional tests that succeeded on MS-DOS and IBM PC DOS, but resulted in a technical support message on competing operating systems. If the system was not MS-DOS, the installer would fail. Digital Research, who owned DR-DOS, released a patch within weeks to allow the installer to continue. Microsoft disabled, but did not remove, this warning message for the final release of Windows 3.1. When Caldera bought DR-DOS from Novell, they brought a lawsuit against Microsoft over the AARD code, which was later settled[11][12].

Windows 3.x was superseded by the release of Windows 95 in August 1995.

Windows 3.1 found a niche market as an embedded operating system after becoming obsolete in the PC world. Up until November 2008, both Virgin Atlantic and Qantas employed it for some of the onboard entertainment systems on long-distance jets. It also sees continued use as an embedded OS in retail cash tills[13].

On July 9, 2008, it was announced that Windows for Workgroups 3.11 for the embedded devices channel would no longer be made available for OEM distribution as of November 1, 2008[14].