Windows Server 2008 is built from the same code base as Windows Vista; therefore, it shares much of the same architecture and functionality. Since the code base is common, it automatically comes with most of the technical, security, management and administrative features new to Windows Vista such as the rewritten networking stack (native IPv6, native wireless, speed and security improvements); improved image-based installation, deployment and recovery; improved diagnostics, monitoring, event logging and reporting tools; new security features such as BitLocker and ASLR; improved Windows Firewall with secure default configuration; .NET Framework 3.0 technologies, specifically Windows Communication Foundation, Microsoft Message Queuing and Windows Workflow Foundation; and the core kernel, memory and file system improvements. Processors and memory devices are modeled as Plug and Play devices, to allow hot-plugging of these devices. This allows the system resources to be partitioned dynamically using Dynamic Hardware Partitioning; each partition has its own memory, processor and I/O host bridge devices independent of other partitions.[8] 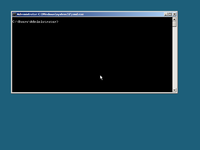 Windows Server 2008 includes a variation of installation called Server Core. Server Core is a significantly scaled-back installation where no Windows Explorer shell is installed. All configuration and maintenance is done entirely through command line interface windows, or by connecting to the machine remotely using Microsoft Management Console. However, Notepad and some control panel applets, such as Regional Settings, are available.

Andrew Mason, a program manager on the Windows Server team, noted that a primary motivation for producing a Server Core variant of Windows Server 2008 was to reduce the attack surface of the operating system, and that about 70% of the security vulnerabilities in Microsoft Windows from the prior five years would not have affected Server Core.[9]

Windows Server 2008 offers high-availability to services and applications through Failover Clustering. Most server features and roles can be kept running with little to no downtime.

Note: This feature is only available in Enterprise and Datacenter editions of Windows Server.

In Windows versions prior to Windows Vista, if the operating system detected corruption in the file system of an NTFS volume, it marked the volume "dirty"; to correct errors on the volume, it had to be taken offline. With self-healing NTFS, an NTFS worker thread is spawned in the background which performs a localized fix-up of damaged data structures, with only the corrupted files/folders remaining unavailable without locking out the entire volume and needing the server to be taken down. The operating system now features S.M.A.R.T. detection techniques to help determine when a hard disk may fail.[12]

Hyper-V is hypervisor-based virtualization software, forming a core part of Microsoft's virtualization strategy. It virtualizes servers on an operating system's kernel layer. It can be thought of as partitioning a single physical server into multiple small computational partitions. Hyper-V includes the ability to act as a Xen virtualization hypervisor host allowing Xen-enabled guest operating systems to run virtualized.[13] A beta version of Hyper-V shipped with certain x86-64 editions of Windows Server 2008, prior to Microsoft's release of the final version of Hyper-V on 26 June 2008 as a free download. Also, a standalone version of Hyper-V exists; this version only supports the x86-64 architecture.[14] While the IA-32 editions of Windows Server 2008 cannot run or install Hyper-V, they can run the MMC snap-in for managing Hyper-V.

Windows System Resource Manager (WSRM) is integrated into Windows Server 2008. It provides resource management and can be used to control the amount of resources a process or a user can use based on business priorities. Process Matching Criteria, which is defined by the name, type or owner of the process, enforces restrictions on the resource usage by a process that matches the criteria. CPU time, bandwidth that it can use, number of processors it can be run on, and allocated to a process can be restricted. Restrictions can be set to be imposed only on certain dates as well.

Server Manager is a new roles-based management tool for Windows Server 2008.[15] It is a combination of Manage Your Server and Security Configuration Wizard from Windows Server 2003. Server Manager is an improvement of the Configure my server dialog that launches by default on Windows Server 2003 machines. However, rather than serve only as a starting point to configuring new roles, Server Manager gathers together all of the operations users would want to conduct on the server, such as, getting a remote deployment method set up, adding more server roles etc., and provides a consolidated, portal-like view about the status of each role.[16]

Other new or enhanced features include:

Server Core is available in the Web, Standard, Enterprise and Datacenter editions. It is not available in the Itanium edition. Server Core is simply an alternate installation option supported by some of the editions, and not a separate edition by itself. Each architecture has a separate installation DVD. The 32-bit version of Windows Server 2008 Standard Edition is available to verified students for free through Microsoft's DreamSpark program.

The first SP2 beta build was sent out in in October 2008, a public beta arrived in December 2008, and an RC-escrow build was given to testers in January 2009. Windows Vista and Windows Server 2008 share a single service pack binary, reflecting the fact that their code bases were joined with the release of Server 2008. On May 26, 2009, Service Pack 2 was ready for release. It is now available in Windows Update.

System requirements for Windows Server 2008 are as follows: