On 5 September 2006, Microsoft announced USD pricing for the four editions available through retail-channels.[2] It has made available new license and upgrade-license SKUs for each edition.

Microsoft characterizes the packaging for the retail-editions of Windows Vista as "designed to be user-friendly, [...] a hard plastic container that will protect the software inside for life-long use".[3] The case opens sideways to reveal the Windows Vista DVD suspended in a clear plastic case. The Windows Vista disc itself uses a holographic design similar to the discs that Microsoft has produced since Windows 98.

Windows Vista Starter
Much like its predecessor, Windows XP Starter Edition, this edition sells in 139 countries such as Russia, Brazil, People's Republic of China, Nepal, Indonesia, Mexico, Pakistan, Philippines, and Thailand. Microsoft does not make it available in developed technology markets such as the United States, Canada, the European Union, Australia, New Zealand, and Japan (although users can install a 30 day trial-version from the 32-bit DVD).[4][5] Vista Starter has significant limitations, such as allowing a maximum of three applications with a user interface at once, not accepting incoming network connections, a watermark in the corner of the screen, and a physical memory limit of 1 GB. Unlike other editions, a 64-bit version of Starter Edition has not been released.[6] It supports AMD's Athlon XP, Duron, Sempron and Geode processors, and Intel's Celeron, Pentium III processors and certain models of Pentium 4. The usable portion of the hard disk has a limit of 250 GB. Starter Edition comes with some locale-specific desktop wallpapers not found in other editions of Vista. 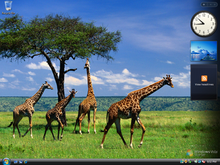 Windows Vista Starter Edition desktop, as denoted by the watermark on the bottom right corner.

Windows Vista Home Basic
Similar to Windows XP Home Edition, Home Basic targets budget-conscious users not requiring advanced media support for home use. This edition lacks the Windows Aero theme with its translucent effects. However, it does support Desktop Window Manager compositing, just without the glass effect. Home Basic supports one physical CPU, but with multiple cores.[7] 64-bit Home Basic supports up to 8 GB of RAM.[8]
This edition includes Windows Firewall, parental controls, Windows Photo Gallery, and more functions.[9] Windows Movie Maker is included as well, but without support for working with high-definition video.[10]
Windows Vista Home Premium
Containing all features from Home Basic and similar to WinXP MCE, this edition also supports additional features aimed for the home market segment, such as support for HDTV and DVD-authoring. It also includes games, support for mobile and tablet PCs, for network projectors, for touchscreens, and for auxiliary displays (via Windows SideShow), and a utility to schedule backups. Home Premium supports 10 simultaneous SMB peer-network connections (compared to 5 in Home Basic).[11] The version of Meeting Space included also allows for interaction (in Home Basic, one may only view meetings). This edition has functionality comparable to that of Windows XP Media Center Edition. Like Home Basic, it supports only one physical CPU, but multiple cores.[7] 64-bit Home Premium supports up to 16 GB of RAM.[8]
Windows Vista Business
Comparable to Windows XP Professional and Windows XP Tablet PC Edition, Windows Vista Business Edition targets the business market. It includes all the features of Home Basic with the exception of Parental Controls and the Windows Vista Standard theme. This edition can join and participate in a Windows Server domain. It includes Internet Information Services, fax support, Rights Management Services client, Encrypting File System, system image backup and recovery, Offline Files, a single user Remote Desktop server, ad-hoc P2P collaboration capabilities, Shadow Copy support which provides access to previous versions of files, support for Tablet PCs, and other business oriented management features. The Vista Business edition supports up to two physical CPUs.[7] 64-bit Business supports 128 GB of RAM.[8]
Windows Vista Enterprise[12]
This edition targets the enterprise segment of the market: it comprises a superset of the Vista Business edition. Additional features include support for Multilingual User Interface (MUI) packages, BitLocker Drive Encryption, and UNIX application-support. Not available through retail or OEM channels, this edition will get distributed through Microsoft Software Assurance (SA). Since Vista Enterprise classes as a benefit of Microsoft Software Assurance, it includes several SA-only benefits, including a license allowing the running of up to four virtual machines running a mix of Vista editions and versions[13], access to Virtual PC Express, and activation via VLK.[14] Vista Enterprise supports up to two physical CPUs.[7] 64-bit Enterprise supports 128 GB of RAM.[8]
Windows Vista Ultimate
Windows Vista Ultimate combines all the features of the Home Premium and Enterprise editions, plus "Ultimate Extras". 64-bit Ultimate supports 128 GB of RAM.[8]
Microsoft also makes an upgraded variant of Windows Vista Ultimate available: Windows Vista Ultimate Upgrade Limited Numbered Signature Edition. This limited, numbered edition of Windows Vista Ultimate features Bill Gates' signature on the front of the packaging along with its unique number; Microsoft plans to produce only 25,000 copies of this edition.[15]
Microsoft also makes another variant of Windows Vista Ultimate available to raise awareness of AIDS in Africa: WINDOWS VISTA (PRODUCT) RED. This edition is available pre-installed on select Dell computers and also through The Ultimate Steal.

To support 64-bit platforms such as Intel Xeon, Intel Core 2, AMD Opteron and AMD Athlon 64, Microsoft released 64-bit versions of every edition of Windows Vista except for the Starter edition. These editions can run 32-bit programs by running them within the WOW64 subsystem. Most 32-bit programs can run natively, though applications that rely on device drivers will not run unless those device drivers have been written for 64-bit Windows. Most older hardware doesn't have the necessary support to get the drivers written.[22][23][24]

Other applications may have difficulty as well. For example, the Visual Basic 6 IDE will run natively on 32-bit editions, but will not run at all on 64-bit editions.[25] Some application vendors will only provide full / premium product versions for 64-bit Vista and cut down versions for 32-bit Vista (e.g. Adobe Premier Elements is 32-bit and the full Adobe Premier is available for 64-bit Vista - with more capability but at a much higher price).

Various reviewers have reported that the 64-bit editions of Windows Vista outperform their 32-bit counterparts in synthetic benchmarks such as PassMark.[26][27][28] For example, in early testing of 64-bit support in Photoshop for Windows, overall performance gains ranged from 8% to 12%. Those who work with extremely large files may realize noticeably greater gains in performance, in some cases as dramatic as ten times the previous speed. This is because 64-bit applications can address larger amounts of memory and thus result in less file swapping — one of the biggest factors that can affect data processing speed.[29]

In March 2004, the European Commission fined Microsoft for €497 million (about US$603 million) and ordered the company to provide a version of Windows without Windows Media Player. The Commission concluded that Microsoft "broke European Union competition law by leveraging its near monopoly in the market for PC operating systems onto the markets for work group server operating systems and for media players". After unsuccessful appeals in 2004 and 2005, Microsoft reached an agreement with the Commission where it would release a court-compliant version, Windows XP Edition N, that does not include the company's Windows Media Player but instead encourages users to pick and download their own media player. Similarly, in December 2005, the Korean Fair Trade Commission ordered Microsoft to make available editions of Windows XP and Windows Server 2003 that do not contain Windows Media Player or Windows Messenger.[31] Like the European Commission decision, this decision was based on the grounds that Microsoft had abused its dominant position in the market to push other products onto consumers. Unlike that decision, however, Microsoft was also forced to withdraw the non-compliant versions of Windows from the South Korean market. This decision resulted in Microsoft's releasing "K" and "KN" variants of the Home and Professional editions of Windows XP in August 2006.

As a continuance of these requirements, Microsoft released "N" and "KN" variants of some editions of Windows Vista that exclude Windows Media Player, as well as "K" and "KN" editions that include links to third-party media player and instant messaging software. "N" editions of Windows Vista require third-party software (or a separate installation of Windows Media Player) to play audio CDs and other media formats such as MPEG-4.

This edition mirrors the feature set of the Business edition of Windows Vista.

This edition mirrors the feature set of the Ultimate edition of Windows Vista. Accordingly, it includes capabilities not found in Vista Business for Embedded Systems like BitLocker Drive Encryption, the Subsystem for UNIX-based Applications, and Virtual PC Express.[33]

Upgrade paths from Windows XP and between different Vista editions. Dotted lines indicate the need for a "clean install".

Users can sometimes upgrade from Windows XP to Windows Vista, or upgrade from one version of Windows Vista to another. However, not all potential upgrade combinations exist. The accompanying chart indicates the possible upgrade paths:

Note: If a user is running a 32-bit version of Windows a user can only upgrade to another 32-bit version: to upgrade from 32-bit to 64-bit requires a clean install.