The Encrypting File System (EFS) on Microsoft Windows is a feature introduced in version 3.0 of NTFS[1] that provides filesystem-level encryption. The technology enables files to be transparently encrypted to protect confidential data from attackers with physical access to the computer.

EFS is available in all versions of Windows developed for business environments from Windows 2000 onwards.[2] By default, no files are encrypted, but encryption can be enabled by users on a per-file, per-directory, or per-drive basis. Some EFS settings can also be mandated via Group Policy in Windows domain environments.[3]

User authentication and access control lists can protect files from unauthorized access while the operating system is running, but are easily circumvented if an attacker gains physical access to the computer.

The most widely accepted solution is to store the files encrypted on the physical media (disks, USB pen drives, tapes, CDs and so on).

In the Microsoft Windows family of operating systems EFS enables this measure, although on NTFS drives only, and does so using a combination of public key cryptography and symmetric key cryptography to make decrypting the files extremely difficult without the correct key.

However, the cryptography keys for EFS are in practice protected by the user account password, and are therefore susceptible to most password attacks. In other words, encryption of files is only as strong as the password to unlock the decryption key. 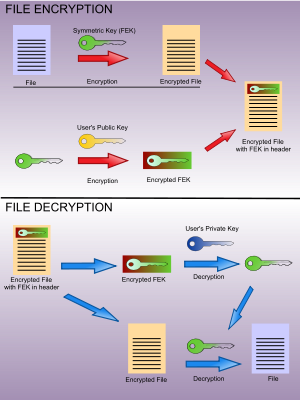 Folders whose contents are to be encrypted by the file system are marked with an encryption attribute. The EFS component driver treats this encryption attribute in a way that is analogous to the inheritance of file permissions in NTFS: if a folder is marked for encryption, then by default all files and subfolders that are created under the folder are also encrypted. When encrypted files are moved within an NTFS volume, the files remain encrypted. However, there are a number of occasions in which the file could be decrypted without the user explicitly asking Windows to do so.

The most significant way of preventing the decryption-on-copy is using backup applications that are aware of the "Raw" APIs. Backup applications that have implemented these Raw APIs will simply copy the encrypted file stream and the $EFS alternate data stream as a single file. In other words, the files are "copied" (e.g. into the backup file) in encrypted form, and are not decrypted during backup.

Two significant security vulnerabilities existed in Windows 2000 EFS, and have been variously targeted since.

In Windows 2000, the local administrator is the default Data Recovery Agent, capable of decrypting all files encrypted with EFS by any local user. EFS in Windows 2000 cannot function without a recovery agent, so there is always someone who can decrypt encrypted files of the users. Any non-domain-joined Windows 2000 computer will be susceptible to unauthorized EFS decryption by anyone who can take over the local Administrator account, which is trivial given many tools available freely on the Internet.[7]

In Windows XP and later, there is no default local Data Recovery Agent and no requirement to have one. Setting SYSKEY to mode 2 or 3 (syskey typed in during bootup or stored on a floppy disk) will mitigate the risk of unauthorized decryption through the local Administrator account. This is because the local user's password hashes, stored in the SAM file, are encrypted with the Syskey, and the Syskey value is not available to an offline attacker who does not possess the Syskey passphrase/floppy.

In Windows 2000, XP or later, the user's RSA private key is encrypted using a hash of the user's NTLM password hash plus the user name - use of a salted hash makes it extremely difficult to reverse the process and recover the private key without knowing the user's passphrase. Also, again, setting Syskey to mode 2 or 3 (Syskey typed in during bootup or stored on a floppy disk) will mitigate this attack, since the local user's password hash will be stored encrypted in the SAM file.

When encrypting files with EFS - when converting plaintext files to encrypted files - the plaintext files are not wiped, but simply deleted. This means that they can be easily recovered unless they are overwritten. To fully mitigate known, non-challenging technical attacks against EFS, you should configure encryption at the folder level (so that all temporary files like Word document backups which are created in these directories are also encrypted). When you wish to encrypt individual files, copy them to an encrypted folder or encrypt the file "in place", and then securely wipe the disk volume. You can use the Windows Cipher utility (with the /W option) to wipe free space including that which still contains deleted plaintext files; various third-party utilities may work as well.

Anyone who can gain Administrators access can overwrite, override or change the Data Recovery Agent configuration. This is a very serious issue, since an attacker can for example hack the Administrator account (using third-party tools), set whatever DRA certificate they want as the Data Recovery Agent and wait. This is sometimes referred to as a two-stage attack, which is a significantly different scenario than the risk due to a lost or stolen PC, but which highlights the risk due to malicious insiders.

When the user encrypts files after the first stage of such an attack, the FEKs are automatically encrypted with the designated DRA's public key. The attacker only needs to access the computer once more as Administrator to gain full access to all those subsequently EFS-encrypted files. Even using Syskey mode 2 or 3 does not protect against this attack, because the attacker could back up the encrypted files offline, restore them elsewhere and use the DRA's private key to decrypt the files. Of course, if such a malicious insider can gain physical access to the computer, you might consider all security features to be irrelevant, because he could also install rootkits, software or even hardware keyloggers etc. on the computer - which is potentially much more interesting and effective than overwriting DRA policy.

Files encrypted with EFS can only be decrypted by using the RSA private key(s) matching the previously-used public key(s). The stored copy of the user's private key is ultimately protected by the user's logon password. Accessing encrypted files from outside Windows with other operating systems (Linux, for example) is not possible — not least of which because there is currently no third party EFS component driver. Further, using special tools to reset the user's login password will render it impossible to decrypt the user's private key and thus useless for gaining access to the user's encrypted files. The significance of this is occasionally lost on users, resulting in data loss if a user forgets his or her password, or fails to back up the encryption key. This led to coining of the term "delayed recycle bin", to describe the seeming inevitability of data loss if an inexperienced user encrypts his or her files.

If EFS is configured to use keys issued by a Public Key Infrastructure and the PKI is configured to enable Key Archival and Recovery, encrypted files can be recovered by recovering the private key first.

It is possible to store EFS files on other OSes (such as Linux) using other disk formats (such as ext3) through the use of iSCSI. Whilst the APIs used to control and implement EFS are bespoke to Microsoft's Windows OSs (and EFS is restricted to NTFS) using iSCSI you can create a virtual NTFS volume on a networked drive (e.g. an ext3 drive in a Linux device). By using an iSCSI client on a Windows OS (Microsoft has free iSCSI clients for their OS's) and a Linux device with iSCSI support, you can create an iSCSI virtual drive (hosted on a remote networked device), format it as NTFS, and then store EFS folders and data on it. When using RAW API aware applications (as mention previously) because Windows views the iSCSI virtual drive as a local NTFS formatted drive all data is transferred over the LAN/WAN without being decrypted and is stored encrypted on the Linux device. The use of iSCSI enables EFS files to be stored natively on Linux based devices.

Windows EFS supports a range of symmetric encryption algorithms, depending on the version of Windows in use when the files are encrypted: