According to Microsoft, Windows Server 2003 is more scalable and delivers better performance than its predecessor, Windows 2000.[2] 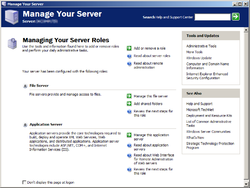 Windows Server 2003 comes in a number of editions, each targeted towards a particular size and type of business.[4] In general, all variants of Windows Server 2003 have the ability to share files and printers, act as an application server, and host message queues, provide email services, authenticate users, act as an X.509 certificate server, provide LDAP directory services, serve streaming media, and to perform other server-oriented functions.

The Premium Edition of SBS includes the features of the Standard edition plus Microsoft SQL Server 2000 and Microsoft Internet Security and Acceleration Server 2004.

SBS has its own type of Client Access License (CAL) that is different and costs slightly more[citation needed] than CALs for the other editions of Windows Server 2003. However, the SBS CAL encompasses the user CALs for Windows Server, Exchange Server, SQL Server, and ISA Server, and hence is less expensive than buying all other CALs individually.

Microsoft Windows Server 2003, Standard Edition is aimed towards small to medium sized businesses.[clarification needed] Standard Edition supports file and printer sharing, offers secure Internet connectivity[clarification needed], and allows centralized desktop application deployment.[clarification needed] The initial release of Windows Server 2003 was available solely for 32-bit processors; a 64-bit version supporting the x86-64 architecture (AMD64 and EM64T, called collectively x64 by Microsoft) was released in April 2005.[8] The 32-bit version will run on up to 4 processors and up to 4 GB RAM; the 64-bit version is capable of addressing up to 32 GB of RAM and also supports Non-Uniform Memory Access. The 32-bit version is available for verified students to download free of charge as part of Microsoft's DreamSpark program.

Windows Server 2003 Datacenter Edition also supports Non-Uniform Memory Access.[citation needed] If supported by the system, Windows, with help from the system firmware will make use of NUMA kernel awareness, which is indicated by the presence of a firmware generatel ACPI Static Resource Affinity Table (SRAT) that defines the NUMA topology of the system. Windows then uses this table to optimize memory accesses, and provide NUMA awareness to applications, thereby increasing the efficiency of thread scheduling and memory management.

Windows Server 2003, Datacenter Edition has better support for Storage Area Networks (SANs).[clarification needed] It features a service which uses Windows sockets to emulate TCP/IP communication over native SAN service providers[citation needed], thereby allowing a SAN to be accessed over any TCP/IP channel.[citation needed] With this, any application that can communicate over TCP/IP can use a SAN, without any modification to the application.[citation needed]

Windows Server 2003, Datacenter Edition also supports 8-node clustering. Clustering increases availability and fault tolerance of server installations by distributing and replicating the service among many servers. This edition supports clustering with each cluster having its own dedicated storage, or with all cluster nodes connected to a common storage area network (SAN). The SAN can be running[clarification needed] on a Windows or non-Windows operating system and may be connected to other computers as well.

Windows Compute Cluster Server 2003 (CCS), released in June 2006, is designed for high-end applications that require high performance computing clusters. It is designed to be deployed on numerous computers to be clustered together to achieve supercomputing speeds. Each Compute Cluster Server network comprises at least one controlling head node and subordinate processing nodes that carry out most of the work.[citation needed]

Compute Cluster Server uses the Microsoft Messaging Passing Interface v2 (MS-MPI) to communicate between the processing nodes on the cluster network.[citation needed] It ties nodes together with a powerful inter-process communication mechanism which can be complex because of communications between hundreds or even thousands of processors working in parallel.[citation needed]

The application programming interface consists of over 160 functions.[citation needed] A job launcher enables users to execute jobs to be executed in the computing cluster. MS MPI was designed to be compatible with the reference open source MPI2 specification which is widely used in High-performance computing (HPC). With some exceptions because of security considerations, MS MPI covers the complete set of MPI2 functionality as implemented in MPICH2, except for the planned future features of dynamic process spawn and publishing.[citation needed]

Windows Storage Server 2003, a part of the Windows Server 2003 series, is a specialized server operating system for Network Attached Storage (NAS). Launched in 2003[clarification needed] at Storage Decisions in Chicago, it is optimized for use in file and print sharing and also in Storage Area Network (SAN) scenarios. It is only available through Original equipment manufacturers (OEMs). Unlike other Windows Server 2003 editions that provide file and printer sharing functionality, Windows Storage Server 2003 does not require any Client access licenses.

Windows Storage Server 2003 NAS equipment can be headless, which means that they are without any monitors, keyboards or mice, and are administered remotely. Such devices are plugged into any existing IP network and the storage capacity is available to all users. Windows Storage Server 2003 can use RAID arrays to provide data redundancy, fault-tolerance and high performance. Multiple such NAS servers can be clustered to appear as a single device. This allows for very high performance as well as allowing the service to remain up even if one of the servers goes down.[clarification needed][citation needed]

Windows Storage Server 2003 can also be used to create a Storage Area Network, in which the data is transferred in terms of chunks rather than files, thus providing more granularity to the data that can be transferred.[citation needed] This provides higher performance to database and transaction processing applications. Windows Storage Server 2003 also allows NAS devices to be connected to a SAN.[citation needed]

Windows Storage Server 2003 R2, as a follow-up to Windows Storage Server 2003, adds file-server performance optimization, Single Instance Storage (SIS), and index-based search. Single instance storage (SIS) scans storage volumes for duplicate files, and moves the duplicate files to the common SIS store. The file on the volume is replaced with a link to the file. This substitution reduces the amount of storage space required, by as much as 70%.[11]

Windows Storage Server 2003 R2 can be used as an iSCSI target with standard and enterprise editions of Windows Storage Server 2003 R2, incorporating WinTarget iSCSI technology which Microsoft acquired in 2006 by from StringBean software.[12][13] This will be an add-on feature available for purchase through OEM partners as an iSCSI feature pack, or is included in some versions of WSS as configured by OEMs.

Windows Storage Server 2003 can be promoted to function as a domain controller; however, this edition is not licensed to run directory services. It can be joined to an existing domain as a member server.[14]

Windows Storage Server 2003 R2 is available in the following editions:

Windows Unified Data Storage Server is a version of Windows Storage Server 2003 R2 with iSCSI target support standard, available in only the standard and enterprise editions.

Windows Home Server is an operating system from Microsoft based on Windows Small Business Server 2003 SP2 (this can be seen in the directory listings of the install DVD). Announced on 7 January 2007 at the Consumer Electronics Show by Bill Gates, Windows Home Server is intended to be a solution for homes with multiple connected PCs to offer file sharing, automated backups, and remote access.

A full list of updates is available in the Microsoft Knowledge Base.[22]

On July 13, 2010, Windows 2003 and its family of operating systems were moved from Mainstream Support to the Extended Support phase as it marks the progression of the legacy operating system through the Microsoft Support Lifecycle Policy. During the Extended Support Phase, Microsoft will continue to provide security updates every month for Windows 2003; however, free technical support, warranty claims, and design changes are no longer being offered.[27]

On July 14, 2015, all Windows 2003 support, including security updates and security-related hotfixes, will be terminated.[27]