Network-attached storage
Not to be confused with Storage area network.

Network-attached storage (NAS) is file-level computer data storage connected to a computer network providing data access to heterogeneous clients. NAS not only operates as a file server, but is specialized for this task either by its hardware, software, or configuration of those elements. NAS is often made as a computer appliance – a specialized computer built from the ground up for storing and serving files – rather than simply a general purpose computer being used for the role.[nb 1]

As of 2010[update] NAS devices are gaining popularity, as a convenient method of sharing files among multiple computers.[1] Potential benefits of network-attached storage, compared to file servers, include faster data access, easier administration, and simple configuration.[2]

NAS systems are networked appliances which contain one or more hard drives, often arranged into logical, redundant storage containers or RAID arrays. Network-attached storage removes the responsibility of file serving from other servers on the network. They typically provide access to files using network file sharing protocols such as NFS, SMB/CIFS, or AFP. 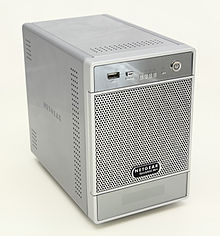 A NAS unit is a computer connected to a network that only provides file-based data storage services to other devices on the network. Although it may technically be possible to run other software on a NAS unit, it is not designed to be a general purpose server. For example, NAS units usually do not have a keyboard or display, and are controlled and configured over the network, often using a browser.[3]

NAS systems contain one or more hard disks, often arranged into logical, redundant storage containers or RAID arrays. NAS removes the responsibility of file serving from other servers on the network.

The key difference between direct-attached storage (DAS) and NAS is that DAS is simply an extension to an existing server and is not necessarily networked. NAS is designed as an easy and self-contained solution for sharing files over the network.

Both DAS and NAS can potentially increase availability of data by using RAID or clustering.

When both are served over the network, NAS could have better performance than DAS, because the NAS device can be tuned precisely for file serving which is less likely to happen on a server responsible for other processing. Both NAS and DAS can have various amount of cache memory, which greatly affects performance. When comparing use of NAS with use of local (non-networked) DAS, the performance of NAS depends mainly on the speed of and congestion on the network.

NAS is generally not as customizable in terms of hardware (CPU, memory, storage components) or software (extensions, plug-ins, additional protocols) as a general-purpose server supplied with DAS.

Visual differentiation of NAS vs. SAN use in network architecture.

NAS provides both storage and a file system. This is often contrasted with SAN (Storage Area Network), which provides only block-based storage and leaves file system concerns on the "client" side. SAN protocols are SCSI, Fibre Channel, iSCSI, ATA over Ethernet (AoE), or HyperSCSI.

One way to loosely conceptualise the difference between a NAS and a SAN is that a NAS appears to the client OS (operating system) as a file server (the client can map network drives to shares on that server) whereas a disk available through a SAN still appears to the client OS as a disk, visible in disk and volume management utilities (along with client's local disks), and available to be formatted with a file system and mounted.

Despite their differences, SAN and NAS are not mutually exclusive, and may be combined as a SAN-NAS hybrid, offering both file-level protocols (NAS) and block-level protocols (SAN) from the same system. An example of this is Openfiler, a free software product running on Linux-based systems.

In the early 1980s, the "Newcastle Connection" by Brian Randell and his colleagues at Newcastle University demonstrated and developed remote file access across a set of UNIX machines.[4][5] Novell's NetWare server operating system and NCP protocol was released in 1983. Following the Newcastle Connection, Sun Microsystems' 1984 release of NFS allowed network servers to share their storage space with networked clients. 3Com and Microsoft would develop the LAN Manager software and protocol to further this new market. 3Com's 3Server and 3+Share software was the first purpose-built server (including proprietary hardware, software, and multiple disks) for open systems servers.

Inspired by the success of file servers from Novell, IBM, and Sun, several firms developed dedicated file servers. While 3Com was among the first firms to build a dedicated NAS for desktop operating systems, Auspex Systems was one of the first to develop a dedicated NFS server for use in the UNIX market. A group of Auspex engineers split away in the early 1990s to create the integrated NetApp filer, which supported both the Windows CIFS and the UNIX NFS protocols, and had superior scalability and ease of deployment. This started the market for proprietary NAS devices now led by NetApp and EMC Celerra.

NAS is useful for more than just general centralized storage provided to client computers in environments with large amounts of data. NAS can enable simpler and lower cost systems such as load-balancing and fault-tolerant email and web server systems by providing storage services. The potential emerging market for NAS is the consumer market where there is a large amount of multi-media data. Such consumer market appliances are now commonly available. Unlike their rackmounted counterparts, they are generally packaged in smaller form factors. The price of NAS appliances has plummeted in recent years, offering flexible network-based storage to the home consumer market for little more than the cost of a regular USB or FireWire external hard disk. Many of these home consumer devices are built around ARM, PowerPC or MIPS processors running an embedded Linux operating system.

Open source NAS-oriented distributions of Linux and FreeBSD are available, including FreeNAS, CryptoNAS, NASLite, Gluster, Openfiler and the Ubuntu-based TurnKey File Server.[9] These are designed to be easy to setup on commodity PC hardware, and are typically configured using a web browser.

They can run from a virtual machine, Live CD, bootable USB flash drive (Live USB), or from one of the mounted hard drives. They run Samba (an SMB daemon), NFS daemon, and FTP daemons which are freely available for those operating systems.

NexentaStor, built on the Nexenta Core Platform, is similar in that it is built on open source foundations; however, NexentaStor requires more memory than consumer-oriented open source NAS solutions and also contains most of the features of enterprise class NAS solutions, such as snapshots, management utilities, tiering services, mirroring, and end-to-end checksumming due, in part, to the use of ZFS.

A clustered NAS is a NAS that is using a distributed file system running simultaneously on multiple servers. The key difference between a clustered and traditional NAS is the ability to distribute (e.g. stripe) data and metadata across the cluster nodes or storage devices. Clustered NAS, like a traditional one, still provides unified access to the files from any of the cluster nodes, unrelated to the actual location of the data.