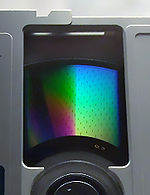 A Magneto-optical disc and the numerous rectangles on its surface.

A magneto-optical drive is a kind of optical disc drive capable of writing and rewriting data upon a magneto-optical disc. Both 130 mm (5.25 in) and 90 mm (3.5 in) form factors exist. The technology was introduced commercially in 1985.[1] Although optical, they appear as hard disk drives to the operating system and do not require a special filesystem; they can be formatted as FAT, HPFS, NTFS, etc. Magneto optical drives are common in some countries such as Japan but have fallen into disuse in other countries. 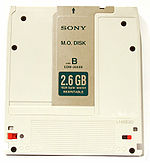 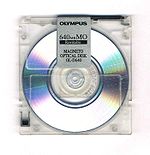 Initially the drives were 130 mm and had the size of full-height 130 mm hard-drives (like in IBM PC XT). 130 mm media looks similar to a CD-ROM enclosed in an old-style caddy, while 90 mm media is about the size of a regular 1.44MB floppy disk, but twice the thickness. The cases provide dust resistance, and the drives themselves have slots constructed in such a way that they always appear to be closed. Originally, MO discs were WORM (write once, read many) drives, but later read/write MO drives became available.[2]

The disc consists of a ferromagnetic material[clarification needed] sealed beneath a plastic coating. The only physical contact is during recording when a magnetic head is brought into contact with the side of the disc opposite to the laser. During reading, a laser projects a beam on the disk and, according to the magnetic state of the surface, the reflected light varies due to the Magneto-optic Kerr effect. During recording, the laser power is increased so it can heat the material up to the Curie point in a single spot. This allows an electromagnet positioned on the opposite side of the disc to change the local magnetic polarization, and the polarization is retained when temperature drops.

Each write cycle requires both a pass to erase a region, and another pass to write information. Both passes use the laser to heat the recording layer, the magnetic field is used for actually changing the magnetic orientation of the recording layer. The electromagnet reverses polarity for writing, and the laser is pulsed to record spots of "1" over the erased region of "0". As a result it takes twice as long to write data as it does to read it.

In 1996, a Direct Overwrite technology was introduced for 90 mm discs, to avoid the initial erase pass when writing. This requires special media.

By default, Magneto-optical drives verify information after writing it to the disc, and are able to report any problems to the operating system immediately. This means that writing can actually take three times longer than reading, but it makes the media extremely reliable, unlike the CD-R or DVD-R technologies upon which data is written to media without any concurrent data integrity checking. Using a magneto-optical disc is a lot more like using a diskette drive than using a CD-RW.

In a read cycle, the laser is operated at a lower power setting, emitting polarized light. The reflected light has a change in Kerr Rotation and Kerr Ellipticity which is measured by an analyzer and corresponds to either a logical 0 or 1.

Progress in magneto-optical technology received a boost in the spring of 1997 with the launch of Plasmon’s DW260 drive. This used Light Intensity Modulated Direct OverWrite technology to achieve an increased level of performance over previous magneto-optical drives.

While they were never particularly popular with consumers (the main consumer marketing being for the 90mm drives), the 130mm drives had some lasting service in corporate storage and retrieval. Optical libraries, such as the Hewlett Packard 40XT, were created to automate loading and storing of the disks. A self contained unit holding 16 or more disks and connected by SCSI to a host computer, the library required specialized archival software to store indexes of data and select disks. Popular uses were for legal document storage and medical imaging, where high reliability, long life, and (for the time) high storage capacity were required. The optical libraries could also manually be used on a Windows 2000/XP machine by selecting and ejecting discs under the Computer Management icon's Removable Storage Service, but this was cumbersome in practice.

The NeXT computer was the first to offer this technology, but Canon eventually provided it to other customers.

Pinnacle Micro was a major manufacturer of magneto optical drives. 3.5" drives were 128MB and 230MB. 5.25" drives produced were 650MB and 1.3GB (Sierra), 2.6GB (Vertex) and 4.6GB (Apex). The Vertex and Apex were non-ISO standard drives and used proprietary media. Pinnacle Micro has ceased production of these products.

Fujitsu was a major manufacturer of 90 mm magneto-optical drives, exceeding 2 GB in capacity, but they have discontinued production and sale of this product category.

PDO Konica Minolta is now the only manufacturer of 90 mm 3.5" magneto-optical drives. They have a 3.5" 1.3GB USB external pocket drive available for sale in the United States and Europe. Sources for this drive are, in the United States techwaredist.com, and in Europe teclogserv.com.

Magneto-optical drives should not be confused with Floptical drives, which likewise combine ferromagnetic and optical technologies, albeit in a different manner. Flopticals are 21 megabyte 90 mm magnetic diskettes using optical tracks to increase the tracking precision of the magnetic head; from the usual 135 tracks per inch to 15,000 tracks per inch. No laser or heating is involved; a simple infrared LED is used to follow the optical tracks, while a magnetic head touched the recording surface. The drives can also read and write traditional 90 mm diskettes, although not the 2.88 megabyte variety. Flopticals were manufactured by Insite Peripherals, a company founded by Jim Burke[disambiguation needed

At the Consumer Electronics Show in January 2004, Sony revealed a 1 gigabyte capacity MiniDisc known as "Hi-MD." This sixfold increase in capacity is performed using a magneto-optical trick. To record a standard MiniDisc the writer uses an infrared laser to heat a spot of ferromagnetic material on the disc to above its Curie point, then it is magnetised by a recording head as it cools. In contrast a high capacity MiniDisc uses tracks that are one sixth of the width of those used in standard MiniDiscs. By employing three magnetic layers, when a high capacity MiniDisc is read, the track expands to readable size. Specifically the three layers are, from read-face to print-face: a displacement layer, a switching layer, and a memory layer. When it isn't being read, the magnetic field in the memory layer is the same as those in the displacement and switching layers. When a laser shines on the track, the switching layer, which has a lower Curie point than the other layers, demagnetises. It decouples from the displacement layer, whose "magnetic fence" around the track weakens, temporarily causing the track to swell to a readable size[citation needed]. Hi-MD recorders can also double the capacity of regular minidiscs with special formatting that renders the disc unreadable (or writable) by non-Hi-MD minidisc recorders.

As with all removable storage media, the advent of cheap CD/DVD drives and flash memory has made them largely redundant. Magneto-optical disks in particular were expensive when new, and while highly reliable, the slow writing time also was a detriment.