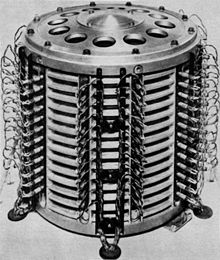 Drum memory is a magnetic data storage device and was an early form of computer memory widely used in the 1950s and into the 1960s, invented by Gustav Tauschek in 1932 in Austria.[1]

Drums were later replaced as the main working memory by memory such as core memory and a variety of other systems which were faster as they had no moving parts, and which lasted until semiconductor memory entered the scene.

A drum is a large metal cylinder that is coated on the outside surface with a ferromagnetic recording material. It could be considered the precursor to the hard disk platter, but in the form of a drum rather than a flat disk. In most cases a row of fixed read-write heads runs along the long axis of the drum, one for each track.

A difference between most drums and a modern hard disk drive is that on a drum there was a track per head so that the heads do not have to move to the track to access data; the controller simply waits for the data to appear under the relevant head as the drum turns. In a modern hard disk drive delay can include the seek time, to move into place plus a rotational latency, the time taken by the drum to rotate wanted data into position, whereas the performance of a drum with its head per track is determined almost entirely by the rotational latency. Particularly while drums were used as main working memory, programmers often took to positioning code onto the drum in such a way as to reduce the amount of time needed to find the next instruction. They did this by timing how long it would take after loading an instruction for the computer to be ready to read the next one, then placing that instruction on the drum so that it would arrive under a head just in time. This method of timing compensation is called the skip factor or interleave, and was used for many years in hard disk controllers.

The head per track scheme is not inherent to drum technology; a few drum stores such as the Univac FASTRAND had one or more moving heads. Such drums were not able to compete effectively with hard disk drives for storage applications and stopped being manufactured in the 1970s. Similarly, head per track disks were used, mostly for paging, and supplanted fixed-head drums in this application by the 1970s, but both technologies were ultimately eclipsed by the advent of inexpensive semiconductor memory.

As late as 1980, PDP-11/45 machines that used drums for swapping (and magnetic core memory) were still in use at many of the original UNIX sites.

In modern-day BSD Unix and its descendants, /dev/drum is the name of the default virtual memory (swap) device, deriving from the use of drum secondary-storage devices as backing store for pages in virtual memory.