DDR SDRAM
This article is about DDR SDRAM. For graphics DDR, see GDDR.

Double data rate synchronous dynamic random access memory (DDR SDRAM) is a class of memory integrated circuits used in computers. DDR SDRAM (sometimes referred to as DDR1 SDRAM) has been superseded by DDR2 SDRAM and DDR3 SDRAM, neither of which are either forward or backward compatible with DDR SDRAM, meaning that DDR2 or DDR3 memory modules will not work in DDR equipped motherboards, and vice versa.

Compared to single data rate (SDR) SDRAM, the DDR SDRAM interface makes higher transfer rates possible by more strict control of the timing of the electrical data and clock signals. Implementations often have to use schemes such as phase-locked loops and self-calibration to reach the required timing accuracy.[1][2] The interface uses double pumping (transferring data on both the rising and falling edges of the clock signal) to lower the clock frequency. One advantage of keeping the clock frequency down is that it reduces the signal integrity requirements on the circuit board connecting the memory to the controller. The name "double data rate" refers to the fact that a DDR SDRAM with a certain clock frequency achieves nearly twice the bandwidth of a single data rate (SDR) SDRAM running at the same clock frequency, due to this double pumping.

"Beginning in 1996 and concluding in June 2000, JEDEC developed the DDR (Double Data Rate) SDRAM specification (JESD79)."[3] JEDEC has set standards for data rates of DDR SDRAM, divided into two parts. The first specification is for memory chips, and the second is for memory modules. 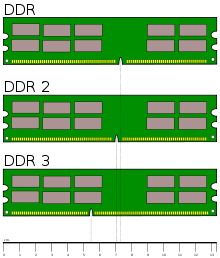 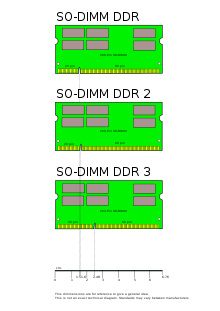 Note: All above listed are specified by JEDEC as JESD79F.[5] All RAM data rates in-between or above these listed specifications are not standardized by JEDEC—often they are simply manufacturer optimizations using tighter-tolerance or overvolted chips.

The package sizes in which DDR SDRAM is manufactured are also standardized by JEDEC.

DDR SDRAM modules for desktop computers, commonly called DIMMs, have 184 pins (as opposed to 168 pins on SDRAM, or 240 pins on DDR2 SDRAM), and can be differentiated from SDRAM DIMMs by the number of notches (DDR SDRAM has one, SDRAM has two). DDR SDRAM for notebook computers, SO-DIMMs, have 200 pins, which is the same number of pins as DDR2 SO-DIMMs. These two specifications are notched very similarly and care must be taken during insertion if unsure of a correct match. DDR SDRAM operates at a voltage of 2.5 V, compared to 3.3 V for SDRAM. This can significantly reduce power consumption. Chips and modules with DDR-400/PC-3200 standard have a nominal voltage of 2.6 V.

Increasing operating voltage slightly can increase maximum speed, at the cost of higher power dissipation and heating, and at the risk of malfunctioning or damage.

Many new chipsets use these memory types in multi-channel configurations.

DRAM density
Size of the chip are measured in megabits (1 megabyte = 8 megabits. For example, 256 Mbit means 32 MB.) Nearly all motherboards only recognize 1 GB modules if they contain 64M×8 chips (low density ). If 128M×4 (high density) 1 GB modules are used, they most likely will not work. The JEDEC standard allows 128M×4 only for slower buffered/registered modules designed specifically for some servers, but some generic manufacturers do not comply.[7][verification needed]
Organization
The notation like 64M×4 means that the memory matrix has 64 million (the product of banks x rows x columns) 4-bit storage locations. There are ×4, ×8, and ×16 DDR chips. The ×4 chips allow the use of advanced error correction features like Chipkill, memory scrubbing and Intel SDDC in server environments, while the ×8 and ×16 chips are somewhat less expensive. x8 chips are mainly used in desktops/notebooks but are making entry into the server market. There are normally 4 banks and only one row can be active in each bank.

To increase memory capacity and bandwidth, chips are combined on a module. For instance, the 64-bit data bus for DIMM requires eight 8-bit chips, addressed in parallel. Multiple chips with the common address lines are called a memory rank. The term was introduced to avoid confusion with chip internal rows and banks. A memory module may bear more than one rank. The term sides would also be confusing because it incorrectly suggests the physical placement of chips on the module.

All ranks are connected to the same memory bus (address+data). The Chip Select signal is used to issue commands to specific rank.

Capacity
Number of DRAM Devices
The number of chips is a multiple of 8 for non-ECC modules and a multiple of 9 for ECC modules. Chips can occupy one side (single sided) or both sides (dual sided) of the module. The maximum number of chips per DDR module is 36 (9×4) for ECC and 32 (8x4) for non-ECC.
ECC vs non-ECC
Modules that have error correcting code are labeled as ECC. Modules without error correcting code are labeled non-ECC.

Buffering
registered (or buffered) vs unbuffered
Packaging
Typically DIMM or SO-DIMM
Power consumption
A test with DDR and DDR2 RAM in 2005 found that average power consumption appeared to be of the order of 1-3W per 512MB stick. Increases with clock rate, and when in use rather than idling.[8] A manufacturer has produced calculators to estimate the power used by various types of RAM[9].

Total module capacity is a product of one chip's capacity by the number of chips. ECC modules multiply it by 8/9 because they use one bit per byte for error correction. A module of any particular size can therefore be assembled either from 32 small chips (36 for ECC memory), or 16(18) or 8(9) bigger ones.

DDR memory bus width per channel is 64 bits (72 for ECC memory). Total module bit width is a product of bits per chip by number of chips. It also equals number of ranks (rows) multiplied by DDR memory bus width. Consequently a module with greater amount of chips or using ×8 chips instead of ×4 will have more ranks.

This example compares different real-world server memory modules with a common size of 1 GB. One should definitely be careful buying 1 GB memory modules, because all these variations can be sold under one price position without stating whether they are ×4 or ×8, single or dual ranked.

There is a common belief that number of module ranks equals number of sides. As above data shows, this is not true. One can find 2-side/1-rank or 2-side/4-rank modules. One can even think of a 1-side/2-rank memory module having 16(18) chips on single side ×8 each, but it's unlikely such a module was ever produced.

From JEDEC Board Ballot JCB-99-70, and modified by numerous other Board Ballots, formulated under the cognizance of Committee JC-42.3 on DRAM Parametrics.

"This comprehensive standard defines all required aspects of 64Mb through 1Gb DDR SDRAMs with X4/X8/X16 data interfaces, including features, functionality, ac and dc parametrics, packages and pin assignments. This scope will subsequently be expanded to formally apply to x32 devices, and higher density devices as well."

PC3200 is DDR SDRAM designed to operate at 200 MHz using DDR-400 chips with a bandwidth of 3,200 MB/s. Because PC3200 memory transfers data on both the rising and falling clock edges, its effective clock rate is 400 MHz.

1 GB PC3200 non-ECC modules are usually made with sixteen 512 Mbit chips, 8 down each side (512 Mbits × 16 chips) / (8 bits (per byte)) = 1,024 MB. The individual chips making up a 1 GB memory module are usually organized with 64 Mbits and a data width of 8 bits for each chip, commonly expressed as 64M×8. Memory manufactured in this way is low density RAM and will usually be compatible with any motherboard specifying PC3200 DDR-400 memory.[citation needed]

In the context of the 1 GB non-ECC PC3200 SDRAM module, there is very little visually to differentiate low density from high density RAM. High density DDR RAM modules will, like their low density counterparts, usually be double-sided with eight 512 Mbit chips per side. The difference is that for each chip, instead of being organized in a 64M×8 configuration, it is organized with 128 Mbits and a data width of 4 bits, or 128M×4.

High density memory modules are assembled using chips from multiple manufacturers. These chips come in both the familiar 22 × 10 mm (approx.) TSOP2 and smaller squarer 12 × 9 mm (approx.) FBGA package sizes. High density chips can be identified by the numbers on each chip.

High density RAM devices were designed to be used in registered memory modules for servers. JEDEC standards do not apply to high-density DDR RAM in desktop implementations.[citation needed] JEDEC's technical documentation, however, supports 128M×4 semiconductors as such that contradicts 128×4 being classified as high density. As such, high density is a relative term, which can be used to describe memory which is not supported by a particular motherboard's memory controller.[citation needed]

DDR
(DDR1) has been superseded by DDR2 SDRAM, which has some modifications to allow higher clock frequency, but operates on the same principle as DDR. Competing with DDR2 are Rambus XDR DRAM. DDR2 has become the standard[when?], as XDR is lacking support. DDR3 SDRAM is a new standard that offers even higher performance and new features.

DDR's prefetch buffer depth is 2 bits, while DDR2 uses 4 bits. Although the effective clock rates of DDR2 are higher than for DDR, the overall performance was no greater in the early implementations, primarily due to the high latencies of the first DDR2 modules. DDR2 started to be effective by the end of 2004, as modules with lower latencies became available.[11]

Memory manufacturers have stated that it is impractical to mass-produce DDR1 memory with effective clock rates in excess of 400 MHz (i.e. 400MT/s and 200MHz external Clock). DDR2 picks up where DDR1 leaves off, and is available at effective clock rates of 400 MHz and higher. RDRAM is a particularly expensive alternative to DDR SDRAM, and most manufacturers have dropped its support from their chipsets. DDR1 memory's prices have substantially increased since Q2 2008 while DDR2 prices are reaching an all-time low. In January 2009, 1 GB DDR1 is 2–3 times more expensive than 1 GB DDR2. High density DDR RAM will suit about 10% of PC motherboards on the market while low density will suit almost all motherboards on the PC Desktop market.

MDDR is an acronym that some enterprises use for Mobile DDR SDRAM, a type of memory used in some portable electronic devices, like mobile phones, handhelds, and digital audio players. Through techniques including reduced voltage supply and advanced refresh options, Mobile DDR can achieve greater power efficiency.