Optical Mark Recognition (also called Optical Mark Reading and OMR) is the process of capturing human-marked data from document forms such as surveys and tests. 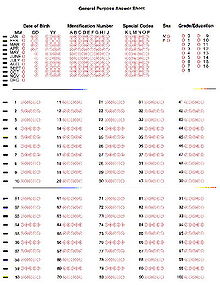 Many traditional OMR (Optical Mark Recognition) devices work with a dedicated scanner device that shines a beam of light onto the form paper. The contrasting reflectivity at predetermined positions on a page is then utilized to detect the marked areas because they reflect less light than the blank areas of the paper.

In contrast to the dedicated OMR device, desktop OMR software allows a user to create their own forms in a word processor and print them on a laser printer. The OMR software then works with a common desktop image scanner with a document feeder to process the forms once filled out.

OMR is generally distinguished from optical character recognition (OCR) by the fact that a complicated pattern recognition engine is not required. That is, the marks are constructed in such a way that there is little chance of not reading the marks correctly. This does require the image to have high contrast and an easily-recognizable or irrelevant shape. A related field to OMR and OCR is the recognition of barcodes such as the UPC bar code found on product packaging.

One of the most familiar applications of optical mark recognition is the use of #2 (HB in Europe) pencil bubble optical answer sheets in multiple choice question examinations. Students mark their answers, or other personal information, by darkening circles marked on a pre-printed sheet. Afterwards the sheet is automatically graded by a scanning machine. In most European countries, a horizontal or vertical 'tick' in a rectangular 'lozenge' is the most commonly used type of OMR form, the most familiar application being the UK National lottery form. Lozenge marks are a later technology and have the advantage of being easier to mark and easier to erase. The large 'bubble' marks are legacy technology from the very early OMR machines that were so insensitive a large mark was required for reliability. In most Asian countries, a special marker is used to fill in an optical answer sheet. Students, likewise mark answers or other information via darkening circles marked on a pre-printed sheet. Then the sheet is automatically graded by a scanning machine.

Many of today's OMR applications involve people filling in specialized forms. These forms are optimized for computer scanning, with careful registration in the printing, and careful design so that ambiguity is reduced to the minimum possible. Due to its extremely low error rate, low cost and ease-of-use, OMR is a popular method of tallying votes.[1][2][3][4][5][6][7][8][9][10] 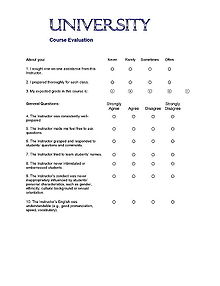 Plain paper OMR survey form, without registration marks and drop-out colors, designed to be scanned by an image scanner and OMR software

OMR Software is a computer software application that makes OMR possible on a desktop computer by using an Image scanner to process surveys, tests, attendance sheets, checklists, and other plain-paper forms printed on a laser printer.

The need for OMR software originated because early Optical Mark Recognition systems were designed to use dedicated scanners and special pre-printed forms with drop-out colors and registration marks. Such forms typically cost USD $0.10 to $0.19 a page.[11] In contrast, OMR Software users design their own mark-sense forms with a word processor or built-in form editor and print them locally on a laser printer saving themselves thousands of dollars on large numbers of forms.[12]

Some OMR software products are developed and distributed under open source licenses.

OMR is now used as an input device for data entry. Two early forms of OMR are paper tape and punch cards which use actual holes punched into the medium instead of pencil filled circles on the medium. Paper tape was used as early as 1857 as an input device for telegraph.[15] Punch cards were created in 1890 and were used as input devices for computers. The use of punch cards declined greatly in the early 1970s with the introduction of personal computers.[16] With modern OMR, where the presence of a pencil filled in bubble is recognized, the recognition is done via an optical scanner.

The first mark sense scanner was the IBM 805 Test Scoring Machine; this read marks by sensing the electrical conductivity of graphite pencil lead using pairs of wire brushes that scanned the page. In the 1930s, Richard Warren at IBM experimented with optical mark sense systems for test scoring, as documented in US Patents 2,150,256 (filed in 1932, granted in 1939) and 2,010,653 (filed in 1933, granted in 1935). The first successful optical mark-sense scanner was developed by Everett Franklin Lindquist as documented in US Patent 3,050,248 (filed in 1955, granted in 1962). Lindquist had developed numerous standardized educational tests, and needed a better test scoring machine than the then-standard IBM 805. The rights to Lindquist's patents were held by the Measurement Research Center until 1968, when the University of Iowa sold the operation to Westinghouse Corporation.

During the same period, IBM also developed a successful optical mark-sense test-scoring machine, as documented in US Patent 2,944,734 (filed in 1957, granted in 1960). IBM commercialized this as the IBM 1230 Optical mark scoring reader in 1962. This and a variety of related machines allowed IBM to migrate a wide variety of applications developed for its mark sense machines to the new optical technology. These applications included a variety of inventory management and trouble reporting forms, most of which had the dimensions of a standard punched card.

While the other players in the educational testing arena focused on selling scanning services, Scantron Corporation, founded in 1972,[17] had a different model; it would distribute inexpensive scanners to schools and make profits from selling the test forms.[18] As a result, many people came to think of all mark-sense forms (whether optically sensed or not) as scantron forms. Scantron operates as a subsidiary of M&F Worldwide(MFW)[19] and provides testing and assessment systems and services and data collection and analysis services to educational institutions, businesses and government.

Westinghouse Learning Corporation was acquired by National Computer Systems in 1983. In 2000, Pearson Education acquired NCS; the OMR technology formed the core of Pearson's Data Management group. In February 2008, Pearson sold this group to M&F Worldwide, and it is now part of the Scantron brand.[20]

OMR has been used in many situations as mentioned below. The use of OMR in inventory systems was a transition between punch cards and bar codes and is not used as much for this purpose.[16] OMR is still used extensively for surveys and testing though.

The use of OMR is not limited to schools or data collection agencies; many businesses and health care agencies use OMR to streamline their data input processes and reduce input error. OMR, OCR, and ICR technologies all provide a means of data collection from paper forms. OMR may also be done using an OMR (discrete read head) scanner or an imaging scanner.[21]

There are many other applications for OMR, for example:

OMR has different fields to provide the format the questioner desires. These fields include:

In the past and presently, some OMR systems require special paper, special ink and a special input reader (Bergeron, 1998). This restricts the types of questions that can be asked and does not allow for much variability when the form is being input. Progress in OMR now allows users to create and print their own forms and use a scanner (preferably with a document feeder) to read the information (Bergeron, 1998). The user is able to arrange questions in a format that suits their needs while still being able to easily input the data (LoPresti, 1996). OMR systems approach one hundred percent accuracy and only take .005 seconds on average to recognize marks (Bergeron, 1998). Users can use squares, circles, ellipses and hexagons for the mark zone. The software can then be set to recognize filled in bubbles, x’s or check marks.

OMR can also be used for personal use. There are all-in-one printers in the market that will print the photos the user selects by filling in the bubbles for size and paper selection on an index sheet that has been printed. Once the sheet has been filled in, the individual places the sheet on the scanner to be scanned and the printer will print the photos according to the marks that were indicated (M. Meek, personal communication, February 11, 2006).

There are also some disadvantages and limitations to OMR. If the user wants to gather large amounts of text, then OMR complicates the data collection (Green, 2000). There is also the possibility of missing data in the scanning process, and incorrectly or unnumbered pages can lead to their being scanned in the wrong order. Also, unless safeguards are in place, a page could be rescanned providing duplicate data and skewing the data (Bergeron, 1998).

For the most part OMR provides a fast, accurate way to collect and input data; however, it is not suited for everyone’s needs.

As a result of the widespread adoption and ease of use of OMR, standardized examinations consist primarily of multiple-choice questions, changing the nature of what is being tested.