Internet Explorer 6 (abbreviated as IE6) is the sixth major revision of Internet Explorer, a web browser developed by Microsoft for Windows operating systems. It was released on August 27, 2001, shortly after the completion of Windows XP.

This version of Internet Explorer is widely criticized for its security issues and lack of support for modern web standards, making frequent appearances in "worst tech products of all time" lists, with some publications labeling it as the "least secure software on the planet."[2] Because a substantial percentage of the web audience still uses the outdated browser, campaigns have been established to encourage users to upgrade to newer versions of Internet Explorer or switch to different browsers. Some websites have dropped support for IE6 entirely, most notable of which is Google dropping support in some of its services.[3][4]

Over ten years after its release, it continues to receive patches for security vulnerabilities.

When Internet Explorer 6 was released, it included a number of enhancements over its predecessor, Internet Explorer 5.5. It and its layout engine Trident are required for many programs including Microsoft Encarta. IE6 improved support for Cascading Style Sheets, adding support for a number of properties which previously had not been implemented and fixing bugs such as the Internet Explorer box model bug.[5] In Windows XP, IE6 introduced a redesigned interface based on the operating system's default theme, Luna.

IE6 was the most widely used web browser during its tenure, surpassing Internet Explorer 5.x. At its peak in 2002 and 2003, IE6 attained a total market share of nearly 90%, with all versions of IE combined reaching 95%. There was little change in IE's market share for several years, until Mozilla Firefox was released and gradually began to gain popularity. Microsoft subsequently resumed development of Internet Explorer and released Internet Explorer 7, further reducing the number of IE6 users.

Although security patches continue to be released for a range of platforms, most recent feature additions and security improvements were released for Windows XP only.

As of June 23, 2006, Secunia counted 20 unpatched security flaws for Internet Explorer 6, many more and older than for any other browser, even in each individual criticality-level, although some of these flaws only affect Internet Explorer when running on certain versions of Windows or when running in conjunction with certain other applications.[12]

On June 23, 2004, an attacker used two previously undiscovered security holes in Internet Explorer to insert spam-sending software on an unknown number of end-user computers.[13] This malware became known as Download.ject and it caused users to infect their computers with a back door and key logger merely by viewing a web page. Infected sites included several financial sites.

Probably the biggest generic security failing of Internet Explorer (and other web browsers too) is the fact that it runs with the same level of access as the logged in user, rather than adopting the principle of least user access. Consequently any malware executing in the Internet Explorer process via a security vulnerability (e.g. Download.ject in the example above) has the same level of access as the user, something that has particular relevance when that user is an Administrator. Tools such as DropMyRights are able to address this issue by restricting the security token of the Internet Explorer process to that of a limited user. However this added level of security is not installed or available by default, and does not offer a simple way to elevate privileges ad-hoc when required (for example to access Microsoft Update).

Art Manion, a representative of the United States Computer Emergency Readiness Team (US-CERT) noted in a vulnerability report that the design of Internet Explorer 6 Service Pack 1 made it difficult to secure. He stated that:

There are a number of significant vulnerabilities in technologies relating to the IE domain/zone security model, local file system (Local Machine Zone) trust, the Dynamic HTML (DHTML) document object model (in particular, proprietary DHTML features), the HTML Help system, MIME type determination, the graphical user interface (GUI), and ActiveX. … IE is integrated into Windows to such an extent that vulnerabilities in IE frequently provide an attacker significant access to the operating system.[14]

Manion later clarified that most of these concerns were addressed in 2004 with the release of Windows XP Service Pack 2, and other browsers have now begun to suffer the same vulnerabilities he identified in the above CERT report.[15]

Many security analysts[who?] attribute Internet Explorer's frequency of exploitation in part to its ubiquity, since its market dominance makes it the most obvious target. However, some critics[who?] argue that this is not the full story, noting that Apache HTTP Server, for example, had a much larger market share than Microsoft IIS, yet Apache had traditionally had fewer (and generally less serious) security vulnerabilities than IIS, at the time.[16]

As a result of its many problems, some security experts, including Bruce Schneier, recommend that users stop using Internet Explorer for normal browsing, and switch to a different browser instead.[17] Several notable technology columnists have suggested the same, including The Wall Street Journal's Walt Mossberg,[18] and eWeek's Steven Vaughan-Nichols.[19] On July 6, 2004, US-CERT released an exploit report in which the last of seven workarounds was to use a different browser, especially when visiting untrusted sites.[20]

It was the most widely used web browser during its tenure (surpassing Internet Explorer 5.x), attaining a peak in usage share during 2002 and 2003 in the high 80s, and together with other versions up to 95%[citation needed]. It only slowly declined up to 2007, when it lost about half its market share to Windows Internet Explorer 7 and Mozilla Firefox between late 2006 to 2008.

Net Applications estimated IE6 market share at almost 39% for September, 2008.[23] According to the same source, IE7 users migrate faster to IE8 than users of its predecessor IE6 does. This led to IE6 once again becoming the most widely used browser version. During the summer and fall of 2009 and 8 years after its introduction, IE6 once again held the top spot in terms of browser market share.[24]

A common criticism of Internet Explorer is of the speed at which fixes are released after discovery of the security problems.

Microsoft attributes the perceived delays to rigorous testing. A posting to the Internet Explorer team blog on August 17, 2004 explained that there are, at minimum, 234 distinct releases of Internet Explorer that Microsoft supports (covering more than two dozen languages, and several different revisions of the operating system and browser level for each language), and that every combination is tested before a patch is released.[34]

In May 2006, PC World rated Internet Explorer 6 the eighth worst tech product of all time.[2] A certain degree of complacency has been alleged against Microsoft over IE6. With near 90% of the browser market the motive for innovation was not strongly present, resulting in the 5 year time between the IE6's introduction and its replacement with IE7. This was a contributing factor for the rapid rise of the free software alternative Mozilla Firefox.

Unlike most other browsers currently in use, IE6 does not fully nor properly support CSS version 2, which makes it difficult for web developers to ensure compatibility with the browser without degrading the experience for users of more modern browsers. Developers often have to resort to strategies such as CSS hacks, conditional comments, or other forms of browser sniffing to make their websites work in IE6.

Additionally, IE6 lacks support for alpha transparency in PNG images, instead of removing all transparency and displaying the image with a solid colour background (grey unless defined in a PNG bKGD chunk). There is a workaround by way of Microsoft's proprietary AlphaImageLoader, but it is more complicated to use and not wholly comparable in function.[35]

Internet Explorer 6 has also been criticized due to its instability. For example, the following code on a website would cause a program crash in IE6:

The user could crash the browser with a single line of code in the address bar, causing a pointer overflow.[36][37] 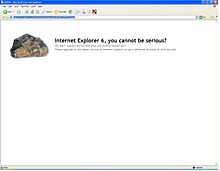 There are several campaigns aiming to rid Internet Explorer 6, which is still used by 9.22% of Internet surfers,[38] from the browser market:

With the increasing lack of compatibility with modern web standards, larger websites are starting to remove support for IE6, including YouTube[3] and their parent company Google;[4] however, with large company IT support teams forcing staff to use IE6, it is unlikely Microsoft will completely remove support for the aging browser any time in the near future.[50] Microsoft has themselves, despite admitting to some of its many flaws, stated that they will support IE6 until Windows XP SP3 support is removed, meaning IE6 will be officially supported until 2014, 13 years after its release.[51] However they have now started their own campaign to encourage users to stop using IE6.[52]

Internet Explorer uses a zone-based security framework, which means that sites are grouped based upon certain conditions. IE allows the restriction of broad areas of functionality, and also allows specific functions to be restricted. The administration of Internet Explorer is accomplished through the Internet Properties control panel. This utility also administers the Internet Explorer framework as it is implemented by other applications.

Patches and updates to the browser are released periodically and made available through Windows Update web site. Windows XP Service Pack 2 adds several important security features to Internet Explorer, including a popup blocker and additional security for ActiveX controls. ActiveX support remains in Internet Explorer although access to the "Local Machine Zone" is denied by default since Service Pack 2. However, once an ActiveX control runs and is authorized by the user, it can gain all the privileges of the user, instead of being granted limited privileges as Java or JavaScript do. This was later solved in the Windows Vista version of IE 7, which supported running the browser in a low-permission mode, making malware unable to run unless expressly granted permission by the user.

Internet Explorer 6 dropped Compatibility Mode, which allowed Internet Explorer 4[53] to be run side by side with 5.x.[54][55] Instead, IE6 introduced quirks mode, which causes it to emulate many behaviors of IE 5.5.[56] Rather than being activated by the user, quirks mode is automatically and silently activated when viewing web pages that contain an old or invalid DOCTYPE (or none at all). This feature was later added to all other major browsers to maximize compatibility with old or poorly-coded web pages.[57]