Paint (formerly Paintbrush for Windows) is a simple graphics painting program that has been included with all versions of Microsoft Windows. It is often referred to as MS Paint or Microsoft Paint. The program opens and saves files as Windows bitmap (24-bit, 256 color, 16 color, and monochrome, all with the .bmp extension), JPEG, GIF (without animation or transparency, although the Windows 98 version, a Windows 95 upgrade, and the Windows NT4 version did support the latter), PNG (without alpha channel), and TIFF (without multiple page support). The program can be in color mode or two-color black-and-white, but there is no grayscale mode. For its simplicity, it rapidly became one of the most used applications in the early versions of Windows—introducing many to painting on a computer for the first time—and still has strong associations with the immediate usability of the old Windows workspace.

The first version of Paint was introduced with the first version of Windows, Windows 1.0. It was a licensed version of ZSoft Corporation's PC Paintbrush. Paint was later renamed to Paintbrush in Windows 3.0, but the name was changed back to Paint in Windows 95 and later. This version only supported the MSP and BMP file formats. The former is no longer supported by newer versions of Paint, along with PCX and RLE. Older versions cannot open or edit PNG files, and can only open GIF, JPEG, and TIFF files with a graphics filter for the specific file type.[clarification needed]

In Windows 95, a new version of Paint was introduced. The same icons and color palette continued to be used through Windows XP. The version of Paint included in Windows 95 and Windows NT 4.0 allowed saving and loading a custom set of color wells as color palette files (*.pal) using Save colors and Get colors functions from the Colors menu.[1] This functionality worked correctly only if the color depth of images was 16-bits per pixel (bpp) or higher (65,536 (64k) colors [High Color]).

In the Windows 98, Windows 2000 or Windows Me versions of Paint, images could be saved in JPEG and GIF and PNG formats if the necessary Microsoft graphics filters were installed, usually by another Microsoft application such as Microsoft Office or Microsoft PhotoDraw. In Windows Me onwards (excluding Windows 2000), the canvas size expands automatically when larger images are opened or pasted, instead of asking.

In Windows XP and later versions, Paint is based on GDI+ and therefore,[2] images can be natively saved as JPEG, GIF, TIFF and PNG without requiring additional graphics filters (in addition to BMP). However, alpha channel transparency is still not supported because the GDI+ version of Paint can only handle up to 24-bit depth images. Support for acquiring images from a scanner or a digital camera was also added to Paint. 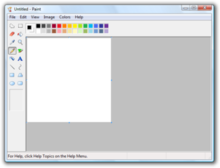 In Windows Vista, the toolbar icons and default colour palette were changed. Also added were an increased number of undo levels to 10 times, a zoom slider, and a crop function. This version saves as .jpg by default, and gives no control over the lossy compression used, so may subtly degrade the quality of an image.

The Windows 7 version of Paint makes use of the Ribbon GUI.[3] It also features "artistic" brushes composed of varying shades of gray and some transparency that give a more realistic result. To add to the realism, the oil and watercolor brushes can only paint for a small distance before the user must re-click (this gives the illusion that the paint brush has run out of paint). It also has anti-aliased shapes, which can be resized freely until they are rasterised when another tool is selected. This version supports viewing (but not saving) transparent PNG and ICO file formats and saves in the PNG file format by default. There is now an option to make any shape bigger or smaller after drawing it. Text can now be pasted into text boxes that don't have enough room to display the text. A text box can then be enlarged or reshaped appropriately to fit the text if desired. Previous versions of Paint would display an error message if a user tried to paste more text than there was room for.

The Windows 7 version of Paint mostly corrects a long standing defect from previous versions involving an inability to scroll the window when editing in Zoom view over 100%. However, when inserting text in Zoom view, the user cannot move the text beyond the zoomed viewport while the text window is in edit mode with either the mouse or keyboard (scrollbars are disabled).

The program comes with the following options in its Tool Box (from left to right in image):

The Image menu offers the following options: Flip/Rotate, Stretch/Skew, Invert Colors, Image Attributes, Clear Image, and Draw Opaque. The "Colors" menu allows the user to Edit Colors (only menu option under Colors). The Edit Colors dialog box shows the standard Windows color picker which includes a 48-color palette and 12 custom color slots that can be edited. Clicking "Define Custom Colors" displays a square version of the color wheel that can select a custom color either with a crosshair cursor (like a "+"), by Hue/Saturation/Luminance, or by Red/Green/Blue values.[citation needed]

An example of what an artist can do in Paint

Paint also has a few hidden functions not mentioned in the help file: a stamp mode, trail mode, regular shapes, and moving pictures.[4] For the stamp mode, the user can select part of the image, hold the control key, and move it to another part of the canvas. This, instead of cutting the piece out, creates a copy of it. The process can be repeated as many times as desired, as long as the control key is held down. The trail mode works exactly the same, but it uses the shift key instead of the control key.

A 10x magnification is available by clicking just below to 8x selector.

The user may also draw straight horizontal, vertical, or diagonal lines with the pencil tool, without the need of the straight line tool, by holding the shift key and dragging the tool. Moreover, it is also possible to thicken (control key + +) or thin (control key + −) a line simultaneously while it is being drawn. To crop whitespace or eliminate parts of a graphic, the blue handle in the lower right corner can be clicked and dragged to increase canvas size or crop a graphic. The colors in the image can be inverted by pressing control key + I (This shortcut has been changed to control key + shift key + I in the Windows 7 version of Paint). Users can also draw perfect shapes (which have width equal to height) using the Rounded Rectangle, the Circle, and the Rectangle Tool by holding down the Shift key while dragging.

Older versions of Paint, such as the one bundled with Windows 3.1, allowed controlling the drawing cursor with the use of arrow keys as well as a color-replace brush, which replaced a single color underneath the brush with another without affecting the rest of the image. In later versions of Paint, the color erase brush may be simulated by selecting the color to be replaced as the primary color, and the one it will be replaced with as the secondary color, and then right-click dragging the erase tool. The drawing cursor can also be controlled with arrow keys in current versions of Paint if Mouse keys under Accessibility options is enabled and configured appropriately.

Paint's exclusive availability on the Windows platform has led to the creation of clones by users of other operating systems, such as Kolourpaint for users of Linux, BSD and Solaris.[5]

The new version of Paint found in Windows 7 offers many new features, namely a selection of brushes including Oil, Watercolor, and Calligraphic.[citation needed]

By default, almost all versions of Paint create 24-bit images and are generally unable to properly downgrade them to indexed palettes using fewer than 24 bits per pixel. This means that when saving images in any of the supported formats, if a format that uses indexed palettes with fewer than 24 bits per pixel instead of true color is specified, then a warning message is displayed about possible loss of quality. In fact, Paint does not normally utilize binary, color or gray scale dithering or palette optimization, and the image will be saved with usually irreversibly scrambled colors, potentially ruining one's work. For example, a typical Windows screen will change the buttons and menu bar from grey to khaki green when saved as an 8-bit BMP format. Saving to a monochrome BMP or a GIF format does invoke dithering processes; however, even these use a fixed black-and-white (in the case of monochrome BMP) or standard 256-color (in the case of GIF) palette, leading in the latter case to unnecessarily dithering a picture that already had fewer than 256 colors.

Paint is nonetheless able to correctly load and save indexed palettes in any of the supported formats if an image is opened as an 8-bit or otherwise indexed palette image. In that case, the image's palette will be preserved when saving. However, there is no way to see the actual palette, and color choices for brushes, text and erasers as well as user-defined colors will be limited to the closest available color in the indexed palette.[citation needed]