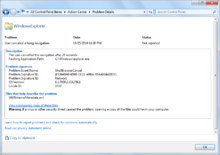 Windows Error Reporting was improved significantly in Windows Vista. Most importantly a new set of public APIs have been created for reporting failures other than application crashes and hangs.[2] Developers can create custom reports and customize the reporting user interface. The new APIs are documented in MSDN. The architecture of Windows Error Reporting has been revamped with a focus on reliability and user experience. WER can now report errors even when the process is in a very bad state for example if the process has encountered stack exhaustions, PEB/TEB corruptions, heap corruptions etc. In earlier OSs prior to Vista, the process usually terminated silently without generating an error report in these conditions. A new Control Panel applet, "Problem Reports and Solutions", was also introduced, keeping a record of system and application errors and issues, as well as presenting probable solutions to problems.

The Problem Reports and Solutions Control Panel applet was replaced by the Maintenance section of the Windows Action Center on Windows 7 and Server 2008 R2.

Software and hardware manufacturers can also close the loop with their customers by linking error signatures to Windows Error Reporting Responses. This allows distributing solutions as well as collecting extra information from customers (such as reproducing the steps they took before the crash) and providing them with support links.

Microsoft has reported that data collected from Windows Error Reporting has made a huge difference in the way software is developed internally. For instance, in 2002, Steve Ballmer noted that error reports enabled the Windows team to fix 29% of all Windows XP errors with Windows XP SP1. Over half of all Microsoft Office XP errors were fixed with Office XP SP2.[9] Success is based in part on the 80/20 rule. Error reporting data reveals that there is a small set of bugs that is responsible for the vast majority of the problems users see. Fixing 20% of code defects can eliminate 80% or more of the problems users encounter. An article in the New York Times confirmed that error reporting data had been instrumental in fixing problems seen in the beta releases of Windows Vista and Microsoft Office 2007.[10]

Although Microsoft has made privacy assurances, they acknowledge that personally identifiable information could be contained in the memory and application data compiled in the 100-200K "minidumps" that Windows Error Reporting compiles and sends back to Microsoft. They insist that in case personal data is sent to Microsoft, it won't be used to identify users, according to Microsoft's privacy policy.[11][12] But in reporting issues to Microsoft, users need to trust Microsoft's partners as well. About 450 partners have been granted access to the error reporting database to see records related to their drivers, utilities and applications.[citation needed]