Emerging markets are nations with social or business activity in the process of rapid growth and industrialization. Based on data from 2006, there are around 28 emerging markets in the world[citation needed] (data from 2010 says there are 40 emerging markets[citation needed]). The economies of China and India are considered to be the largest.[1] According to The Economist many people find the term outdated, but no new term has yet to gain much traction.[2] Emerging market hedge fund capital reached a record new level in the first quarter of 2011 of $121 billion.[3]

The ASEAN–China Free Trade Area, launched on January 1, 2010, is the largest regional emerging market in the world.[4]

Developing countries that are neither part of the least developed countries, nor of the newly industrialized countries

In the 1970s, "less economically developed countries" (LEDCs) was the common term for markets that were less "developed" (by objective or subjective measures) than the developed countries such as the United States, Western Europe, and Japan. These markets were supposed to provide greater potential for profit, but also more risk from various factors. This term was felt by some to be not positive enough so the emerging market label was born. This term is misleading in that there is no guarantee that a country will move from "less developed" to "more developed"; although that is the general trend in the world, countries can also move from "more developed" to "less developed".

Originally brought into fashion in the 1980s by then World Bank economist Antoine van Agtmael,[5] the term is sometimes loosely used as a replacement for emerging economies, but really signifies a business phenomenon that is not fully described by or constrained to geography or economic strength; such countries are considered to be in a transitional phase between developing and developed status. Examples of emerging markets include Indonesia, Iran, some countries of Latin America, some countries in Southeast Asia, most countries in Eastern Europe, Russia, some countries in the Middle East, and parts of Africa. Emphasizing the fluid nature of the category, political scientist Ian Bremmer defines an emerging market as "a country where politics matters at least as much as economics to the markets".[6]

The research on emerging markets is diffused within management literature. While researchers including C. K. Prahalad, George Haley, Hernando de Soto, Usha Haley, and several professors from Harvard Business School and Yale School of Management have described activity in countries such as India and China, how a market emerges is little understood.

In the 2008 Emerging Economy Report,[7] the Center for Knowledge Societies defines Emerging Economies as those "regions of the world that are experiencing rapid informationalization under conditions of limited or partial industrialization." It appears that emerging markets lie at the intersection of non-traditional user behavior, the rise of new user groups and community adoption of products and services, and innovations in product technologies and platforms. 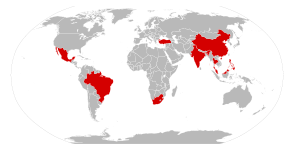 Newly industrialized countries as of 2010. This is an intermediate category between fully developed and developing.

The term "rapidly developing economies" is being used to denote emerging markets such as The United Arab Emirates, Chile and Malaysia that are undergoing rapid growth.

In recent years, new terms have emerged to describe the largest developing countries such as BRIC that stands for Brazil, Russia, India, and China,[8] along with BRICET (BRIC + Eastern Europe and Turkey), BRICS (BRIC + South Africa), BRICM (BRIC + Mexico), BRICK (BRIC + South Korea), Next Eleven (Bangladesh, Egypt, Indonesia, Iran, Mexico, Nigeria, Pakistan, Philippines, South Korea, Turkey, and Vietnam) and CIVETS (Colombia, Indonesia, Vietnam, Egypt, Turkey and South Africa).[9] These countries do not share any common agenda, but some experts believe that they are enjoying an increasing role in the world economy and on political platforms.

It is difficult to make an exact list of emerging (or developed) markets; the best guides tend to be investment information sources like ISI Emerging Markets and The Economist or market index makers (such as Morgan Stanley Capital International). These sources are well-informed, but the nature of investment information sources leads to two potential problems. One is an element of historicity; markets may be maintained in an index for continuity, even if the countries have since developed past the emerging market phase. Possible examples of this are South Korea[10] and Taiwan. A second is the simplification inherent in making an index; small countries, or countries with limited market liquidity are often not considered, with their larger neighbours considered an appropriate stand-in.

In an Opalesque.TV video, hedge fund manager Jonathan Binder discusses the current and future relevance of the term "emerging markets" in the financial world. Binder says that in the future investors will not necessarily think of the traditional classifications of "G10" (or G7) versus "emerging markets". Instead, people should look at the world as countries that are fiscally responsible and countries that are not. Whether that country is in Europe or in South America should make no difference, making the traditional "blocs" of categorization irrelevant.

Newly industrialized countries are emerging markets whose economies have not yet reached first world status but have, in a macroeconomic sense, outpaced their developing counterparts.

The Advanced Emerging markets are:

As of May 2010, MSCI Barra classified the following 21 countries as emerging markets:[16]

The list tracked by The Economist is the same, except with Hong Kong, Singapore and Saudi Arabia included (MSCI classifies the first two as developed markets and the third one as a frontier market).

As of 31 December 2010, Standard and Poor's classified the following 19 countries as emerging markets[17]:

Jordan are currently under review for being upgraded to the status of emerging market by S&P.[18]

As of May 2010, Dow Jones classified the following 35 countries as emerging markets:[19]

In November 2010, BBVA Research introduced a new economic concept, to identify a key emerging markets.[21] This classification is divided in two set of developing economies.

EAGLEs (Emerging and Growth-Leading Economies): Expected Incremental GDP in the next 10 years to be larger than the average of the G7 economies, excluding the US.

NEST: Expected Incremental GDP in the next decade to be lower than the average of the G6 economies(G7 excluding the US) but higher than Italy’s.

The Emerging Markets Index is a list of the top 65 cities in emerging markets. The following countries had cities featured on the list (as of 2008):

If we plot the lists above to table below, there are only 3 countries always appear in every list (Next Eleven/BRIC, CIVETS, FTSE, MSCI, The Economist, S&P, Dow Jones). They are Indonesia, Turkey, and Egypt. Indonesia and Turkey, which have been categorized as four emerging markets. Egypt, since January 25, 2011, has been affected by protests and is now in a transition process. There are also several countries to only appear on one list. They are Iran (Next 11), Hong Kong, Singapore, Saudi Arabia (The Economist), Bahrain, Bulgaria, Estonia, Jordan, Kuwait, Latvia, Lithuania, Mauritius, Oman, Qatar, Romania, Slovakia and Sri Lanka (Dow Jones).

"Global Growth Generators", or 3G (countries), is an alternative classification determined by Citigroup analysts as being countries with the most promising growth prospects for 2010-2050. These consist of Indonesia, Egypt (but not Turkey), seven other emerging countries, and two countries not previously listed before, specifically Iraq and Mongolia. The only country to appear in all emerging market lists or groups is Indonesia.[22]

According to World Bank issued at May 2011, BRIC countries plus South Korea and Indonesia will lead the world's economy with more than a half of all global growth by 2025.[23]