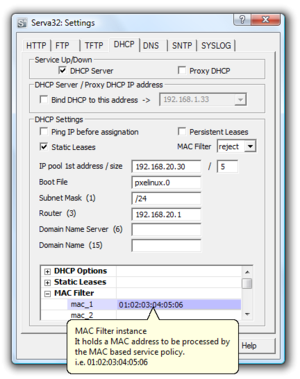 The Dynamic Host Configuration Protocol (DHCP) is a network configuration protocol for hosts on Internet Protocol (IP) networks. Computers that are connected to IP networks must be configured before they can communicate with other hosts. The most essential information needed is an IP address, and a default route and routing prefix. DHCP eliminates the manual task by a network administrator. It also provides a central database of devices that are connected to the network and eliminates duplicate resource assignments.

DHCP is used for IPv4 as well as IPv6. While both versions perform much the same purpose, the details of the protocol for IPv4 and IPv6 are sufficiently different that they may be considered separate protocols.[1]

DHCP was first defined as a standards track protocol in RFC 1531 in October 1993, as an extension to the Bootstrap Protocol (BOOTP). The motivation for extending BOOTP was that BOOTP required manual intervention to add configuration information for each client, and did not provide a mechanism for reclaiming disused IP addresses.

Many worked to clarify the protocol as it gained popularity, and in 1997 RFC 2131 was released, and remains as of 2011[update] the standard for IPv4 networks. DHCPv6 is documented in RFC 3315. RFC 3633 added a DHCPv6 mechanism for prefix delegation. DHCPv6 was further extended to provide configuration information to clients configured using stateless address autoconfiguration in RFC 3736.

The BOOTP protocol itself was first defined in RFC 951 as a replacement for the Reverse Address Resolution Protocol RARP. The primary motivation for replacing RARP with BOOTP was that RARP was a data link layer protocol. This made implementation difficult on many server platforms, and required that a server be present on each individual network link. BOOTP introduced the innovation of a relay agent, which allowed the forwarding of BOOTP packets off the local network using standard IP routing, thus one central BOOTP server could serve hosts on many IP subnets.[2]

Dynamic Host Configuration Protocol automates network-parameter assignment to network devices from one or more DHCP servers. Even in small networks, DHCP is useful because it makes it easy to add new machines to the network.

When a DHCP-configured client (a computer or any other network-aware device) connects to a network, the DHCP client sends a broadcast query requesting necessary information from a DHCP server. The DHCP server manages a pool of IP addresses and information about client configuration parameters such as default gateway, domain name, the name servers, other servers such as time servers, and so forth. On receiving a valid request, the server assigns the computer an IP address, a lease (length of time the allocation is valid), and other IP configuration parameters, such as the subnet mask and the default gateway. The query is typically initiated immediately after booting, and must complete before the client can initiate IP-based communication with other hosts.

Depending on implementation, the DHCP server may have three methods of allocating IP-addresses:

DHCP uses the same two ports assigned by IANA for BOOTP: destination UDP port 67 for sending data to the server, and UDP port 68 for data to the client. DHCP communications are connectionless in nature.

DHCP clients and servers on the same subnet communicate via UDP broadcasts, initially. If the client and server are on different subnets, a DHCP Helper or DHCP Relay Agent may be used. Clients requesting renewal of an existing lease may communicate directly via UDP unicast, since the client already has an established IP address at that point.

The client broadcasts messages on the physical subnet to discover available DHCP servers. Network administrators can configure a local router to forward DHCP packets to a DHCP server from a different subnet. This client-implementation creates a User Datagram Protocol (UDP) packet with the broadcast destination of 255.255.255.255 or the specific subnet broadcast address.

The server determines the configuration based on the client's hardware address as specified in the CHADDR (Client Hardware Address) field. Here the server, 192.168.1.1, specifies the IP address in the YIADDR (Your IP Address) field.

A client can receive DHCP offers from multiple servers, but it will accept only one DHCP offer and broadcast a DHCP request message. Based on the Transaction ID field in the request, servers are informed whose offer the client has accepted. When other DHCP servers receive this message, they withdraw any offers that they might have made to the client and return the offered address to the pool of available addresses. The DHCP request message is broadcast, instead of being unicast to a particular DHCP server, because the DHCP client has still not received an IP address. Also, this way one message can let all other DHCP servers know that another server will be supplying the IP address without missing any of the servers with a series of unicast messages.

The protocol expects the DHCP client to configure its network interface with the negotiated parameters.

After the client obtains an IP address, the client may use the Address Resolution Protocol (ARP) to prevent IP conflicts caused by overlapping address pools of DHCP servers.

A DHCP client may request more information than the server sent with the original DHCPOFFER. The client may also request repeat data for a particular application. For example, browsers use DHCP Inform to obtain web proxy settings via WPAD. Such queries do not cause the DHCP server to refresh the IP expiry time in its database.

The client sends a request to the DHCP server to release the DHCP information and the client deactivates its IP address. As client devices usually do not know when users may unplug them from the network, the protocol does not mandate the sending of DHCP Release.

A DHCP client can select, manipulate and overwrite parameters provided by a DHCP server.[3]

An option exists to identify the vendor and functionality of a DHCP client. The information is a variable-length string of characters or octets which has a meaning specified by the vendor of the DHCP client. One method that a DHCP client can utilize to communicate to the server that it is using a certain type of hardware or firmware is to set a value in its DHCP requests called the Vendor Class Identifier (VCI) (Option 60). This method allows a DHCP server to differentiate between the two kinds of client machines and process the requests from the two types of modems appropriately. Some types of set-top boxes also set the VCI (Option 60) to inform the DHCP server about the hardware type and functionality of the device. The value that this option is set to gives the DHCP server a hint about any required extra information that this client needs in a DHCP response.

The DHCP protocol provides reliability in several ways: periodic renewal, rebinding, and failover. DHCP clients are allocated leases that last for some period of time. Clients begin to attempt to renew their leases once half the lease interval has expired. They do this by sending a unicast DHCPREQUEST message to the DHCP server that granted the original lease. If that server is down or unreachable, it will fail to respond to the DHCPREQUEST. However, the DHCPREQUEST will be repeated by the client from time to time,[specify] so when the DHCP server comes back up or becomes reachable again, the DHCP client will succeed in contacting it, and renew its lease.

If the DHCP server is unreachable for an extended period of time,[specify] the DHCP client will attempt to rebind, by broadcasting its DHCPREQUEST rather than unicasting it. Because it is broadcast, the DHCPREQUEST message will reach all available DHCP servers. If some other DHCP server is able to renew the lease, it will do so at this time.

In order for rebinding to work, when the client successfully contacts a backup DHCP server, that server must have accurate information about the client's binding. Maintaining accurate binding information between two servers is a complicated problem; if both servers are able to update the same lease database, there must be a mechanism to avoid conflicts between updates on the independent servers. A standard for implementing fault-tolerant DHCP servers was developed at the Internet Engineering Task Force.[4][note 1]

If rebinding fails, the lease will eventually expire. When the lease expires, the client must stop using the IP address granted to it in its lease. At that time, it will restart the DHCP process from the beginning by broadcasting a DHCPDISCOVER message. Since its lease has expired, it will accept any IP address offered to it. Once it has a new IP address, presumably from a different DHCP server, it will once again be able to use the network. However, since its IP address has changed, any ongoing connections will be broken.

The base DHCP protocol does not include any mechanism for authentication.[5] Because of this, it is vulnerable to a variety of attacks. These attacks fall into three main categories:

Because the client has no way to validate the identity of a DHCP server, unauthorized DHCP servers can be operated on networks, providing incorrect information to DHCP clients. This can serve either as a denial-of-service attack, preventing the client from gaining access to network connectivity[citation needed], or as a man-in-the-middle attack. Because the DHCP server provides the DHCP client with server IP addresses, such as the IP address of one or more DNS servers,[6] an attacker can convince a DHCP client to do its DNS lookups through its own DNS server, and can therefore provide its own answers to DNS queries from the client.[7] This in turn allows the attacker to redirect network traffic through itself, allowing it to eavesdrop on connections between the client and network servers it contacts, or to simply replace those network servers with its own.[7]

Because the DHCP server has no secure mechanism for authenticating the client, clients can gain unauthorized access to IP addresses by presenting credentials, such as client identifiers, that belong to other DHCP clients.[citation needed] This also allows DHCP clients to exhaust the DHCP server's store of IP addresses—by presenting new credentials each time it asks for an address, the client can consume all the available IP addresses on a particular network link, preventing other DHCP clients from getting service.[citation needed]

DHCP does provide some mechanisms for mitigating these problems. The Relay Agent Information Option protocol extension (RFC 3046) allows network operators to attach tags to DHCP messages as these messages arrive on the network operator's trusted network. This tag is then used as an authorization token to control the client's access to network resources. Because the client has no access to the network upstream of the relay agent, the lack of authentication does not prevent the DHCP server operator from relying on the authorization token.[5]

Another extension, Authentication for DHCP Messages (RFC 3118), provides a mechanism for authenticating DHCP messages. Unfortunately RFC 3118 has not seen widespread adoption because of the problems of managing keys for large numbers of DHCP clients.[8]