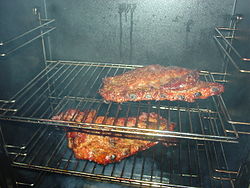 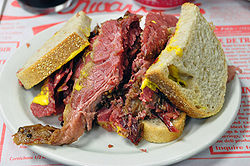 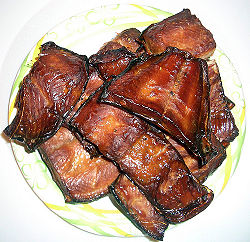 Smoking is the process of flavoring, cooking, or preserving food by exposing it to the smoke from burning or smoldering plant materials, most often wood. Meats and fish are the most common smoked foods, though cheeses, vegetables, and ingredients used to make beverages such as whisky,[1] Rauchbier and lapsang souchong tea are also smoked.

In Europe, alder is the traditional smoking wood, but oak is more often used now, and beech to a lesser extent. In North America, hickory, mesquite, oak, pecan, alder, maple, and fruit-tree woods, such as apple, cherry and plum, are commonly used for smoking. Other fuels besides wood can also be employed, sometimes with the addition of flavoring ingredients. Chinese tea-smoking uses a mixture of uncooked rice, sugar, and tea, heated at the base of a wok. Some North American ham and bacon makers smoke their products over burning corncobs. Peat is burned to dry and smoke the barley malt used to make whisky and some beers. In New Zealand, sawdust from the native manuka (tea tree) is commonly used for hot smoking fish. In Iceland, dried sheep dung is used to cold smoke fish, lamb, mutton and whale.

Historically, farms in the Western world included a small building termed the smokehouse, where meats could be smoked and stored. This was generally well-separated from other buildings both because of the fire danger and because of the smoke emanations. 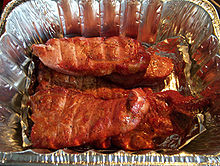 Hardwoods are made up mostly of three materials: cellulose, hemicellulose, and lignin. Cellulose and hemicellulose are the basic structural material of the wood cells; lignin acts as a kind of cell-bonding glue. Some softwoods, especially pines and firs, hold significant quantities of resin, which produces a harsh-tasting soot when burned; these woods are not often used for smoking.

Cellulose and hemicellulose are aggregate sugar molecules; when burnt, they effectively caramelize, producing carbonyls, which provide most of the color components and sweet, flowery, and fruity aromas. Lignin, a highly complex arrangement of interlocked phenolic molecules, also produces a number of distinctive aromatic elements when burnt, including smoky, spicy, and pungent compounds such as guaiacol, phenol, and syringol, and sweeter scents such as the vanilla-scented vanillin and clove-like isoeugenol. Guaiacol is the phenolic compound most responsible for the "smokey" taste, while syringol is the primary contributor to smokey aroma.[2] Wood also contains small quantities of proteins, which contribute roasted flavors. Many of the odor compounds in wood smoke, especially the phenolic compounds, are unstable, dissipating after a few weeks or months.

Since different species of trees have different ratios of components, various types of wood do impart a different flavor to food. Another important factor is the temperature at which the wood burns. High-temperature fires see the flavor molecules broken down further into unpleasant or flavorless compounds. The optimal conditions for smoke flavor are low, smoldering temperatures between 570 and 750 °F (299 and 399 °C). This is the temperature of the burning wood itself, not of the smoking environment, which uses much lower temperatures. Woods that are high in lignin content tend to burn hot; to keep them smoldering requires restricted oxygen supplies or a high moisture content. When smoking using wood chips or chunks, the combustion temperature is often raised by soaking the pieces in water before placing them on a fire.

There are a few basic types of smoker designs, each with their own advantages and disadvantages. 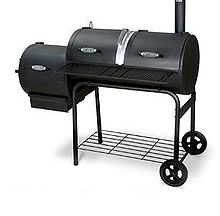 An example of a common offset smoker

The main characteristics of the offset smoker are that the cooking chamber is usually cylindrical in shape, with a shorter, smaller diameter cylinder attached to the bottom of one end for a firebox. To cook the meat, a small fire is lit in the firebox, where airflow is tightly controlled. The heat and smoke from the fire is drawn through a connecting pipe or opening into the cooking chamber. The heat and smoke cook and flavor the meat before escaping through an exhaust vent at the opposite end of the cooking chamber. Most manufacturers' models are based on this simple but effective design, and this is what most people picture when they think of a "BBQ smoker." Even large capacity commercial units use this same basic design of a separate, smaller fire box and a larger cooking chamber.

A diagram of a typical Upright drum Smoker

‎The Upright Drum Smoker (also referred to as an Ugly Drum Smoker or UDS) is exactly what its name suggests; an upright steel drum that has been modified for the purpose of pseudo-indirect hot smoking. There are many ways to accomplish this, but the basics include the use of a complete steel drum, a basket to hold charcoal near the bottom, and cooking rack (or racks) near the top; all covered by a vented lid of some sort. They have been built using many different sizes of steel drums (30 gallon, 55 gallon, and 85 gallon for example), but the most popular size is the common 55 gallon drum.

This design is similar to smoking with indirect heat due to the distance from the coals and the racks (typically 24"). The temperatures used for smoking are controlled by limiting the amount of air intake at the bottom of the drum, and allowing a similar amount of exhaust out of vents in the lid. UDSs are very efficient with fuel consumption and flexible in their abilities to produce proper smoking conditions, with or without the use of a water pan or drip pan. Most UDS builders/users would say a water pan defeats the true pit BBQ nature of the UDS, as the drippings from the smoked meat should land on the coals, burning up, and imparting a unique flavor one cannot get with a water pan. 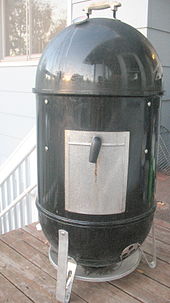 A vertical water smoker (also referred to as a bullet smoker because of its shape) is a variation of the upright drum smoker. It uses charcoal or wood to generate smoke and heat, and contains a water bowl between the fire and the cooking grates. The water bowl serves to hold the temperature down and also to add humidity to the smoke chamber. In addition, the bowl catches any drippings from the meat that may cause a flare up. Vertical water smokers are extremely temperature stable and require very little adjustment once the desired temperature has been reached. Because of their relatively low cost and stable temperature, they are sometimes used in barbecue competitions where propane and electric smokers are not allowed. 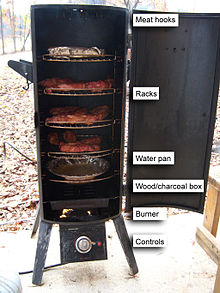 A diagram of a propane smoker

A propane smoker is designed to allow the smoking of meat in a somewhat more controlled environment. The primary differences are the sources of heat and of the smoke. In a propane smoker, the heat is generated by a gas burner directly under a steel or iron box containing the wood or charcoal that provides the smoke. The steel box has few vent holes, on the top of the box only. By starving the heated wood of oxygen, it smokes instead of burning. Any combination of woods and charcoal may used. This method uses less wood.

This more traditional method uses a two box system: The fire box and the food box. The fire box is typically adjacent or under the cooking box, and can be controlled to a finer degree. The heat and smoke from the fire box exhausts into the food box, where it is used to cook and smoke the meat. These may be as simple as an electric heating element with a pan of wood chips placed on it, although more advanced models have finer temperature controls.

Commercial smokehouses, mostly made from stainless steel, have independent systems for smoke generation and cooking. Smoke generators use friction, an electric coil or a small flame to ignite sawdust on demand. Heat from steam coils or gas flames is balanced with live steam or water sprays to control the temperature and humidity. Elaborate air handling systems reduce hot or cold spots, to reduce variation in the finished product. Racks on wheels or rails are used to hold the product and facilitate movement.

Smoke is an antimicrobial and antioxidant, but smoke alone is insufficient for preserving food in practice, unless combined with another preservation method. The main problem is the smoke compounds adhere only to the outer surfaces of the food; smoke does not actually penetrate far into meat or fish. In modern times, almost all smoking is carried out for its flavor. Artificial smoke flavoring can be purchased as a liquid to mimic the flavor of smoking, but not its preservative qualities (see also liquid smoke).

In the past, smoking was a useful preservation tool, in combination with other techniques, most commonly salt-curing or drying. In some cases, particularly in climates without much hot sunshine, smoking was simply an unavoidable side effect of drying over a fire. For some long-smoked foods, the smoking time also served to dry the food. Drying, curing, or other techniques can render the interior of foods inhospitable to bacterial life, while the smoking gives the vulnerable exterior surfaces an extra layer of protection. For oily fish smoking is especially useful, as its antioxidant properties delay surface fat rancidification. (Interior fat is not as exposed to oxygen, which is what causes rancidity.) Some heavily-salted, long-smoked fish can keep without refrigeration for weeks or months. Such heavily-preserved foods usually require a treatment such as boiling in fresh water to make them palatable before eating. 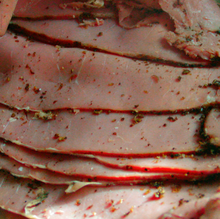 Slices of pastrami, a smoked and cured beef product 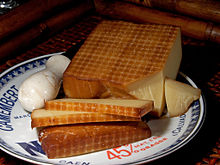 Many foods can be smoked. Some of the more common are listed here.