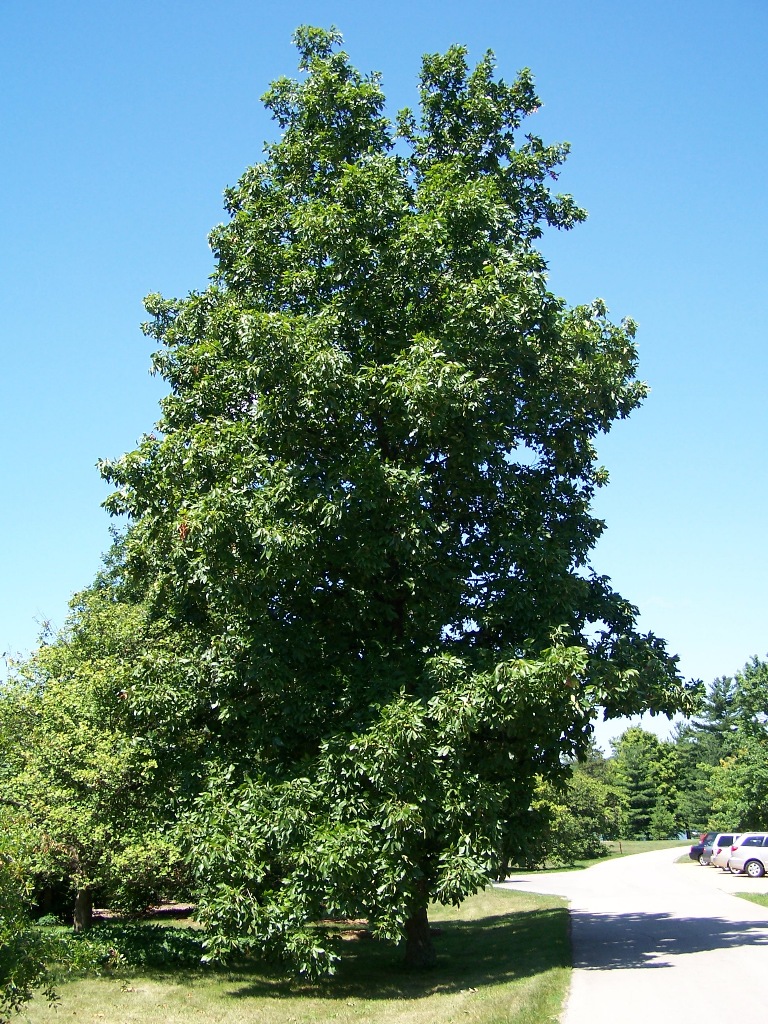 Trees in the genus Carya (from κάρυον "") are commonly known as Hickory. The genus includes 17–19 species of trees with pinnately compound leaves and large nuts. A dozen or so species are native to (11–12 in the , 1 in ), and 5–6 species from and .

Another Asian species, Beaked Hickory, previously listed as "Carya sinensis", is now treated in a separate genus "", as "Annamocarya sinensis".

Hickory s are small yellow-green s produced in spring. They are wind-pollinated and self-incompatible. The is a globose or oval nut, 2–5 cm long and 1.5–3 cm diameter, enclosed in a four-valved husk which splits open at maturity. The nut shell is thick and bony in most species, thin in a few, notably "C. illinoinensis"; it is divided into two halves which split apart when the seed germinates.

In the , genus "Carya" (and the whole family) has been recently moved to the order.

Another insect that uses the hickory tree as a food source is the (""). are related to aphids and have a similarly complex life cycle. Eggs hatch in early spring and the galls quickly form around the developing insects. Phylloxera galls may damage weakened or stressed hickories, but are generally harmless. Deformed leaves and twigs can rain down from the tree in the spring as squirrels break off infected tissue and eat the galls, possibly for the protein content of the phylloxera, or possibly because the galls are fleshy and tasty to the squirrels.

Some fruits are borderline and difficult to categorize. Hickory nuts (Carya) and Walnuts () in the family grow within an outer husk; these fruits are technically s or drupaceous nuts, and thus not true botanical nuts. "Tryma" is a specialized term for such nut-like drupes. [ [http://waynesword.palomar.edu/fruitid1.htm Identification Of Major Fruit Types] ] [ [http://waynesword.palomar.edu/ecoph8.htm Fruits Called Nuts] ]

Hickory is extremely tough, yet flexible, and is valued for handles, bows (like yew), spokes, s, s, stick handles, golf club shafts (sometimes still called "hickory stick", even though made of or graphite), the bottom of skis, walking canes etc. and for punitive use as a switch (like ), and especially as a cane-like hickory stick in schools. bats were formerly made of hickory but are now more commonly made of ash. Hickory is also highly prized for s, because of its high caloric content. Hickory wood is also a preferred type for smoke curing meats. In the , hickory is popular for cooking , as hickory grows abundantly in the region, and adds flavor to the meat. Hickory is sometimes used for hardwood flooring due to its durability and character.

A extract from shagbark hickory is also used in an edible syrup that is similar to , with a slightly bitter, smoky taste.

The nuts of some species are palatable, while others are bitter and only suitable for animal feed. Shagbark and Shellbark Hickories, along with the , are regarded by some as the finest nut trees.

When cultivated for their nuts, note that because of their self-incompatibility, clonal (grafted) trees of the same cannot pollinate each other. Two or more cultivars must be planted together for successful . Seedlings (grown from hickory nuts) will usually have sufficient genetic variation.