Pan Tadeusz
For the 1999 film based on this poem, see Pan Tadeusz (film)

Pan Tadeusz, the full title in English: Sir Thaddeus, or the Last Lithuanian Foray: A Nobleman's Tale from the Years of 1811 and 1812 in Twelve Books of Verse (Polish original: Pan Tadeusz, czyli ostatni zajazd na Litwie. Historia szlachecka z roku 1811 i 1812 we dwunastu księgach wierszem) is an epic poem by the Polish poet, writer and philosopher Adam Mickiewicz. The book was first published in June 1834 in Paris, and is considered by many to be the last great epic poem in European literature.[1]

Pan Tadeusz is recognized as the national epic of Poland. It is compulsory reading in Polish schools. A film based on the poem was made in 1999 by Andrzej Wajda.

The manuscript of Pan Tadeusz held at Ossolineum in Wrocław. Signature of Adam Mickiewicz is visible. 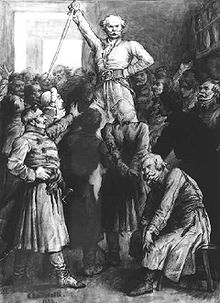 The story takes place over the course of five days in 1811 and one day in 1812, at a time in history, when Poland-Lithuania had already been divided between the armies of Russia, Prussia, and Austria (see Partitions of Poland) and erased from the political map of Europe, although in 1807, just before the story begins, Napoleon had established a satellite Duchy of Warsaw in the Prussian partition, in existence until the Congress of Vienna held in the aftermath of Napoleonic defeat.

The place is situated within the Russian partition, in the village of Soplicowo; the country estate of the Soplica clan. Pan Tadeusz recounts the story of two feuding noble families, and the love between Tadeusz Soplica (the title character) of one family, and Zosia of the other. Another sub-plot involves a spontaneous revolt of the local inhabitants against the occupying Russian garrison. Since Mickiewicz published his poem as an exile in Paris, he was free of the Russian censors to talk openly about the occupation.

The fact that the Polish national poem begins with words "O Lithuania" largely stems from the fact that the 19th century concept of nationality had not yet been geopoliticized in his time. The term "Lithuania" used by Mickiewicz refers rather to a geographical region and not country. It had a much broader geographic extent than it does now (i.e. the modern Lithuania), and it did refer to the historical Lithuania proper. He is often regarded by Lithuanians to be of Lithuanian origin, while Belarusians proclaim Mickiewicz to be one of them, since he was born on the territory of contemporary Belarus.

All works of Mickiewicz including Pan Tadeusz are in the Polish language. He had been brought up in the culture of the Polish-Lithuanian Commonwealth, a multicultural state that had encompassed most of what today are the separate countries of Poland, Lithuania, Belarus and Ukraine. Numerous quotations from Pan Tadeusz are well known in translation, above all its opening lines:

Lithuania, my fatherland! You are like health;
How much you must be valued, will only discover
The one who has lost you.

O Lithuania, my country, thou
Art like good health; I never knew till now
How precious, till I lost thee.

Lithuania, my country! You are as good health:
How much one should prize you, he only can tell
Who has lost you.

Oh Lithuania, my homeland,
you are like health--so valued when lost
beyond recovery; let these words now stand
restoring you, redeeming exile's cost.

The Hunt, illustration to Book IV

The first translation of the poem into a different language, Belarusian, was made in 1859 by the Belarusian writer and dramatist Vintsent Dunin-Martsinkyevich, in Wilno[2]. Because of the pressure from Tsarist authorities Dunin-Martshinkyevich was able to only publish the first two chapters of the poem.

The first film version of the poem as a feature was produced in 1928. The film version made by Andrzej Wajda in 1999 was his great cinematic success in Poland.