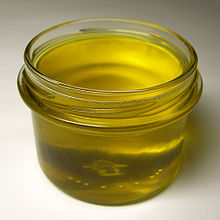 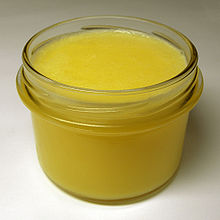 Clarified butter is milk fat rendered from butter to separate the milk solids and water from the butterfat.[1] Typically, it is produced by melting butter and allowing the different components to separate by density. The water evaporates, some solids float to the surface and are skimmed off, and the remainder of the milk solids sink to the bottom and are left behind when the butter fat (which would then be on top) is poured off.

Clarified butter has a higher smoke point than regular butter, and is therefore preferred in some cooking applications, such as sautéing. Clarified butter also has a much longer shelf life than fresh butter. It has negligible amounts of lactose and is, therefore, acceptable to most individuals afflicted with lactose intolerance.

In the Middle East (samna) and South Asia (ghee), the butter may be cooked long enough to evaporate the water portion and caramelize the milk solids (which are then filtered out), resulting in a nutty flavor.[4][5][6] In French cuisine, this is called beurre noisette, translated as "hazelnut butter," and known as brown butter in English.[7]

Names and uses in different countries

In the United States, clarified butter is typically served with unbreaded, cooked seafood. It is also referred to as drawn butter.

In England, clarified butter is used in the process of potting, whereby foods such as shrimp and hare are preserved in pots of butter.

In India and Pakistan, clarified butter is commonly known as ghee and is a common cooking oil. In Pakistan, it is used mainly for cooking, especially, chicken Karahi and lentils. It is also burned as a fuel in religious lamps. In northern India, the milk solids are a delicacy eaten with various unleavened breads. The milk solids are called mehran in Hindi, neyyi (నెయ్యి) in Telugu , neyyi(നെയി) in Malayalam tup in Marathi and thuppa (ತುಪ್ಪ) in Kannada,Bengali: ঘী ghee.

In Brazil, this is known as Manteiga Clarificada and it is commonly mistaken with the manteiga de garrafa (bottle butter), which is featured mostly in cuisine from the northeast.

In German, clarified butter is known as Butterschmalz, sometimes rendered into English as "butter schmalz".

In Iran, it is known as "yellow oil" or "good oil", and is used in place of other oils.

In Middle Eastern countries, it is known as samnah. It replaces oil in frying and sautéing because of its perceived superior flavor. In some Arab countries, such as Egypt, the separated milk solids which remain in the bottom (mortah) are a rare delicacy, and are eaten as a spread on bread.

Rural families in the Maghreb region of North Africa, particularly those of Amazigh descent (where ghee is referred to as Smen or D'haan) sometimes bury a sealed vessel of smen on the day of a daughter's birth, aging it until it is unearthed and used to season the food served on that daughter's wedding.

In Ethiopian and Eritrean cuisines (particularly in the highlands), clarified butter is infused with ginger, garlic, and several spices, and is known as niter kibbeh in Amharic and tesmi in Tigrinya.

In Uganda, amongst the Ankole cultures, clarified butter is made into a dish called eshabwe, a white frothy cream that is eaten with solid foods and is sometimes added to smoked meat.