The rails, or Rallidae, are a large cosmopolitan family of small to medium-sized birds. The family exhibits considerable diversity and the family also includes the crakes, coots, and gallinules. Many species are associated with wetlands, although the family is found in every terrestrial habitat except dry deserts, polar regions and alpine areas above the snow line.

Members of the Rallidae are found on every continent except Antarctica. There are numerous island species. The most common habitats are marshland or dense forest. Rails are especially fond of dense vegetation.[1]

The most typical family members occupy dense vegetation in damp environments near lakes, swamps, or rivers. Reed beds are a particularly favoured habitat. They are omnivorous, and those that migrate do so at night: most nest in dense vegetation. In general, they are shy and secretive birds, and are difficult to observe.

Most species walk and run vigorously on strong legs, and have long toes which are well adapted to soft, uneven surfaces. They tend to have short, rounded wings and although they are generally weak fliers, they are, nevertheless, capable of covering long distances.

Island species often become flightless, and many of them are now extinct following the introduction of terrestrial predators such as cats, rats and pigs.

Many reedbed species are secretive (apart from loud calls), crepuscular, and have laterally flattened bodies. In the Old World, long-billed species tend to be called rails and short-billed species crakes. North American species are normally called rails irrespective of bill length. The smallest of these is the Swinhoe's Rail, at 13 cm (5 inches) and 25 grams.

The larger species are also sometimes given other names. The black coots are more adapted to open water than their relatives, and some other large species are called gallinules and swamphens. The largest of this group is the Takahē, at 65 cm (26 inches) and 2.7 kg (6 lbs).

The rails have suffered disproportionally from human changes to the environment and it is estimated that several hundred species of island rail have become extinct because of this. Several island species of rail remain endangered and conservation organisations and governments continue to work to prevent their extinction. 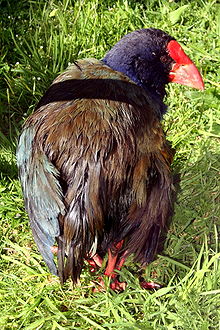 The rails are a fairly homogeneous family of small to medium sized ground living birds. They vary in length from 12 cm to 63 cm and in weight from 20 g to 3000 g. Some species have long necks and in many cases they are laterally compressed. The bill is the most variable feature within the family: in some species it is longer than the head (like the Clapper Rail of the Americas), in others it may be short and wide (as in the coots), or massive (as in the purple gallinules).[2] A few coots and gallinules have a "frontal shield", which is a fleshy rearward extension of the upper bill. The most complex frontal shield is found in the Horned Coot.[3]

The wings of all rails are short and rounded. The flight of those Rallidae able to fly, while not very powerful, can be sustained for long periods of time and many species undertake annual migrations. The weakness of their flight, however, means that they are easily blown off course and thus are common vagrants, a characteristic that has led them to colonize many isolated oceanic islands. Furthermore, these birds often prefer to run rather than fly, especially when in dense habitat. Some are also flightless at some time during their moult period.[4]

Many island rails are flightless because small island habitats without threatening predators often eliminate the need to fly or move long distances. Flight makes intense demands, with the keel and flight muscles taking up to a quarter of a bird's weight in Rallidae species. Reducing the flight muscles, along with the corresponding lowering in metabolic demands, reduces the flightless rail's energy expenditures.[5] For this reason flightlessness makes it easier to survive and colonize an island where resources may be limited.[6] Flightlessness can evolve extremely rapidly in island rails; it took as little as 125,000 years for the Laysan Rail to lose the power of flight and evolve the reduced, stubby wings only useful to keep balance when running quickly.[7]

In general, members of Rallidae are omnivorous generalists. Many species will eat invertebrates, as well as fruit or seedlings. A few species are primarily vegetarian.[1]

The calls of Rallidae species vary and are often quite loud. Some are whistle-like or squeak-like, while others are "unbirdlike".[8] Loud calls are useful in dense vegetation or at night where it is difficult to see another member of the species. Some calls are territorial.[2]

The breeding behavior of many Rallidae species are poorly understood or unknown. Most are thought to be monogamous, although polygyny and polyandry have been reported.[9]

Most often, there are five to ten eggs. Clutches as small as one or as large as fifteen eggs are known.[9]

Egg clutches may not always hatch at the same time. Chicks become mobile after a few days. They will often remain dependent on their parents until fledging, which happens at around one month of age.[3]

Some of the larger, more abundant rails are hunted and their eggs collected for food.[10] The Wake Island Rail was hunted to extinction by the starving Japanese garrison after the island was cut off from supply during World War II.[11]

The Guam Rail is an example of an island species that has been badly affected by introduced species.

At least two species - the Common Moorhen and the American Purple Gallinule - have been considered pests.[10]

Due to their tendencies towards flightlessness, many island species have been unable to cope with introduced species. The most dramatic human caused extinctions occurred in the Pacific Ocean as people colonised the islands of Melanesia, Polynesia and Micronesia, during which an estimated 750-1800 species of bird went extinct, half of which were rails.[12] Some species which came close to extinction, such as the Lord Howe Woodhen, and the Takahē, have made modest recoveries due to the efforts of conservation organisations. The Guam Rail came perilously close to extinction when Brown tree snakes were introduced to Guam but some of the last remaining individuals were taken into captivity and are breeding well, although attempts to reintroduce it have met with mixed results.

The family Rallidae has traditionally been grouped with two families of larger birds, the cranes and bustards, as well as several smaller families of usually "primitive" mid-sized amphibious birds, to make up the order Gruiformes. The alternative Sibley-Ahlquist taxonomy, which has been widely accepted in America, raises the family to ordinal level as the Ralliformes. Given the uncertainty about gruiform monophyly, this may or may not be correct; it certainly seems more justified than most of the Sibley-Ahlquist proposals. On the other hand, such a group would probably also include the Heliornithidae (finfoots and Sungrebe), an exclusively tropical group that is somewhat convergent with grebes, and usually united with the rails in the Ralli. 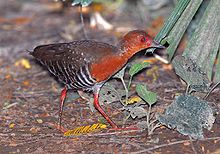 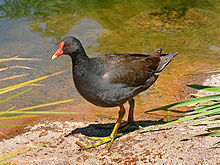 Additionally, there are many prehistoric rails of extant genera, known only from fossil or subfossil remains, such as the Ibiza Rail (Rallus eivissensis). These have not been listed here; see the genus accounts and the articles on fossil and Late Quaternary prehistoric birds for these species.

Fossil species of long-extinct prehistoric rails are richly documented from the well-researched formations of Europe[14] and North America, as well from the less comprehensively studied strata elsewhere:

These taxa may or may not have been rails:

The presumed scolopacid wader Limosa gypsorum (Montmartre Late Eocene of France) is sometimes considered a rail and then placed in the genus Montirallus.[24]