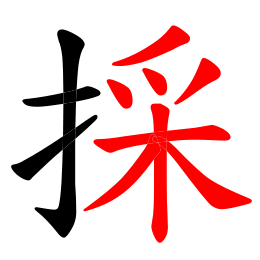 The Chinese character 採 cǎi, meaning ‘to pick’, with its ‘root’, the original, semantic (meaning-bearing) graph on the right, colored red; and its later-added, redundant semantic determinative (which also happens to serve as its dictionary classifier), or section header (部首 bùshǒu) on the left in black. Both portions have been called the ‘radical’ (although nowadays generally the left side), leading to confusion.

A Chinese radical (from the Latin radix, meaning "root") is a component of a Chinese character. The term may variously refer to the original semantic (meaning-bearing) element of a character, or to any semantic element, or, loosely, to any element whatever its origin or purpose. The term is commonly used to describe the element under which a character is traditionally listed in a Chinese dictionary, which is often semantic but may sometimes be a phonetic or merely artificially extracted portion of the character. When used in this way as dictionary section headers (Chinese: 部首; pinyin: bùshǒu), radicals form the basis of an indexing system that has classified Chinese characters throughout the ages, from ancient Shuōwén Jiézì characters to their modern successors.

In an effort to make learning Chinese easier and boost literacy rates, in 1956 and again in 1964 the People's Republic of China released a list of "simplified" Chinese characters which contain fewer strokes than their traditional equivalents. Although simplification of Chinese characters has occurred since the advent of Chinese script, this was the most intensive effort undertaken in modern times. In most cases radicals were simplified according to two basic rules:

Some academics have criticised the usage of the word radical because of its supposed ambiguity.[1] At one time radical referred to the semantic component of a Chinese character, because most (but not all) dictionary section headers are closely linked with the meaning of the characters listed under them. There is a widespread perception that the character elements used as section headers are always, by definition, semantic in their role,[2] but this is not always the case. For example, 木 ("tree"), a common character element with semantic purpose in many characters, is actually phonetic in the character 沐 ("bathe", "wash"), and the character's meaning-bearing radical is the left-hand element, 氵, "water". Another common misunderstanding[citation needed] is that radical means any component of a character. But this is inconsistent with all of its various historical uses.[citation needed] Russian language literature, as well as Russian-influenced literature, uses the word ключ (meaning key). Cf. the usage of the English-language term key in phrases like search key, sort key, index key.

This section discusses various historical and current uses of the term radical.

The inflected words of European languages are decomposed into radical and termination. The radical gives the meaning; the termination indicates case, time, mood. The first sinologists applied those grammatical terms belonging to inflected languages, to the Chinese language which is not an inflected one.

For example, 采 cǎi ‘to pick, pluck’ is an associative compound[3] comprising two elements or components, a hand 爫 (zhǎo or zhuǎ) picking items[4] from a tree 木 (mù); that is, it is originally a two-part graph. Later, a redundant hand 扌 (shǒu) element was added in the traditional form of the graph to form the character 採 (the simplified version used in the PRC then dropped this extra element). The compound then comprised a later-added semantic determinative, 扌, plus what is now often termed an etymon (the original part, or ‘root’), 采. According to the coinage of radical based on ‘root’, the etymonic 采 portion would be the radical, colored in red in the picture to the above right, though in dictionaries the character is actually classified under the left-hand element 扌.

Those who focus on the root meaning of radical (that is, those who equate radical with root and etymon) criticize other uses of the term radical.[5] However, even critics of other uses of the term radical will generally avoid the usage of it in the "semantic root" sense due to the confusion over the term, instead calling such original graphs the original form, or etymon. One reason for avoiding this usage is that people may generally now refer to some other part of a character as the radical (e.g., 扌rather than 采 in the above example), based on the use of "radical" to mean "any semantic element" or the section header under which the character appears in a Chinese dictionary, as described below.

Since the radical of a European word is not only its root but also the portion bearing the core of its meaning, some have applied the term radical not to the original root of a character, such as the 采 in the above example, but to any portion bearing meaning. Ramsey (1987, pp. 136–137) uses the term radical this way, clearly equating any “meaning determinant” with “radical”. Wieger (e.g., p. 14-15) also used the term radical this way, for the “formal element which gives meaning” and divided components into radicals and phonetics depending on their usage in particular characters; e.g., he interpreted 木 mù ‘tree’ as radical in 柏 bó ‘cypress’, but as phonetic in 沐 mù ‘to bathe’. In neither character is there an original root portion, as both characters were created as is, as phonetic-semantic compounds. Note that to avoid confusion with meaning #3 below, this meaning of “any portion bearing meaning rather than purely sound” is now generally termed a semantic component or element,[6] a determinative,[7] or a signific.[8][9]

Section headers of a Chinese dictionary

The term radical may also be applied to the graphic portion of a character (regardless of its role—phonetic, semantic, both,[10] or none—in that character) under which it is listed in the dictionary, known in Chinese as 部首 bùshǒu (Japanese bushu, Korean busu). Section headers is the literal translation, but these are also known as dictionary classifiers[11] or index keys.[12]

This is de facto the prevailing usage of the term radical today. However, some[13] object to the term, because of confusion due to the other uses of the term radical, meaning root and semantic component, as well as because most (but not all) section headers do happen[14] to play a semantic role in the characters listed under them. As a result, many are misled into thinking that the section headers are by definition either semantic roots or semantic components in those characters. This is definitely not correct. There are numerous instances of characters listed under section headers which are merely artificial extractions of portions of those characters, and some of these portions are not even actual graphs with an independent existence (e.g., 亅 jué or juě in 了 liǎo), as explained by Serruys (1984), who therefore prefers the term ‘glyph’ extraction rather than graphic extraction (p. 657). This is even truer of modern dictionaries, which reduce the number of section headers to less than half the number in Shuōwén, at which point it becomes impossible to have enough section headers to cover semantic elements in every character. In the Far Eastern Chinese English Dictionary for instance, 一 is a mere artificial extraction of a stroke from most of its subentries such as 丁 dīng and 且 qǐe; the same is true of 乙 yǐ in 九 jiǔ; 亅 jué or juě in 了 liǎo, le; 二 èr in 亞 yà and yǎ; 田 tián in 禺 yù; 豕 shǐ in 象 xiàng ‘elephant’, and so on. There are also instances of section headers which play a phonetic and not a semantic role in those characters, such as 臼 jiù ‘a mortar’ in 舅 jiù ‘maternal uncle’ (Shuōwén lists this under its semantic 男 nán, ‘male’, but modern dictionaries, with only 200-odd section headers, simply do not have enough to cover a semantic for every character) and 舊 jiù ‘owl; old’ (listed in the Far East on p. 1141 under the header 臼); 虎 hǔ ‘tiger’ in 虖 hū ‘shout’; 鬼 guǐ (originally ‘helmet’[15]), now ‘ghost’, in 魁 kúi, ‘leader’; 鹿 lù ‘deer’ in 麓 lù, foothills; 麻 má ‘hemp’ in 麼 ma, mó ‘tiny’; 黃 huáng ‘yellow’ in 黌 hóng ‘a school’; 羽 yǔ ‘feather’ in 翌 yì ‘next’ (Qiú 2000, p. 7); 齊 qí in 齎 jī ‘to present’; 青 qīng in 靖 jìng ‘peaceful’, 靚 jìng ‘to ornament; quiet’; and 靜 jìng ‘quiet’, and so on. In other words, although most section headers happen to play a semantic role in the characters listed under them, they are not fundamentally semantic, but rather, are somewhat arbitrarily chosen[14] classifiers used to group characters for lexicographic convenience. As Professor Jerry Norman (1988) writes (referring to semantic elements as “significs”):

The Shuōwén Jiézì contains 9,353 characters (Liú 1963). Xǔ arranged these characters under 540 radicals or graphic classifiers. These radicals are elements which a number of characters have in common, and which can thus be used as a means of classifying those characters' graphic shapes; frequently they correspond to the characters' significs, but this is not necessarily always the case. (p.69)

Radical may also be used to refer to:

Position of radical within character

There are fourteen different radical positions, seven basic types and seven variant. The following table lists radical types with Japanese name and position in red and indicate how Kanji is formed by radical with example.