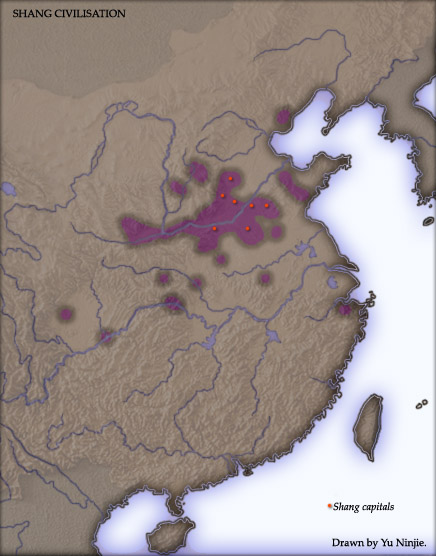 The Shang Dynasty (Chinese: ) or Yin Dynasty () was according to traditional sources the second Chinese dynasty. They ruled in the northeastern region of the area known as "", in the valley. According to traditional " longer chronology", based upon calculations by the Shang ruled between and , however according to the "shorter chronology" based upon the between and . The results of the places them between and 1046 BCE. According to historical tradition the Shang Dynasty followed the (possibly mythical) and preceded the . Direct information about the Shang Dynasty comes from Shang inscriptions on artifacts, but mainly from s—turtle shells, cattle scapulae or other bones on which were written the first significant corpus of recorded s. Other sources on the Shang come from historical records of the later Zhou Dynasty and the "" by .

The inscriptions on the oracle bones are s, which can be gleaned for information on the politics, economy, culture, religion, geography, astronomy, calendar, art and medicine of the period, [See, for instance, Keightley (2000)] and as such provide critical insight into the early stages of the Chinese civilization. One site of the Shang capitals, later historically called the Ruins of Yin (殷墟), is near modern day . Archaeological work there uncovered 11 major Yin royal tombs and the foundations of palaces and ritual sites, containing weapons of war and remains of human as well as of animal sacrifices. Tens of thousands of bronze, jade, stone, bone and ceramic artifacts have been obtained; the workmanship on the bronzes attests to a high level of civilization. In terms of inscribed oracle bones alone, more than 20,000 were discovered in the initial scientific excavations in the 1920s to 1930s, and over four times more have since been found.

During the (960&ndash;1279 AD), and the Chinese gentry became avid s and collectors of ancient artwork, some claiming to have found Shang Dynasty era s with written inscriptions.

At the excavated royal palace of , there were large stone pillar bases found along with foundations and platforms "as hard as cement" as Fairbank asserts, which originally supported 53 buildings of wooden post-and-beam construction. In close proximity to the main palatial complex, there were pits used for storage, service quarters, and housing quarters. The remnants of the rammed earth walls at Zhengzhou are determined to have risen convert|27|ft|m in height, and formed a roughly rectangular wall convert|4|mi|km around the ancient city.

Cowry shell as obtained from the seacoast were also excavated from Anyang, suggesting the Shang were somewhat of a maritime people.

Many of the Shang tombs had been tunneled into and ravaged by grave robbers of ancient times.

The Shang dynasty is believed to have been founded by a rebel leader who overthrew the last Xia ruler. Its civilization was based on agriculture, augmented by hunting and animal husbandry. The "" state that the Shang moved its capital six times. The final and most important move to Yin in 1350 BC led to the golden age of the dynasty. The term Yin dynasty has been synonymous with the Shang in history, and indeed was the more popular term, although it is now often used specifically in reference to the latter half of the Shang. The Japanese and Koreans still refer to the Shang dynasty exclusively as the Yin ("In") dynasty.

A line of hereditary Shang kings ruled over much of northern China, and Shang troops fought frequent wars with neighboring settlements and nomadic herdsmen from the inner Asian s. The capitals, particularly that in Yin, were centers of glittering court life. Court rituals to propitiate spirits developed. In addition to his secular position, the king was the head of the ancestor- and spirit-worship cult. The king often performed oracle bone divinations himself, especially near the end of the dynasty. Evidence from the royal tombs indicates that royal personages were buried with articles of value, presumably for use in the afterlife. Perhaps for the same reason, hundreds of commoners, who may have been slaves, were buried alive with the royal corpse.

The Shang had a fully developed system of writing as attested on bronze inscriptions, , and a small number of other writings on pottery, jade and other stones, horn, etc.; [Qiu 2000, p.60] its complexity and state of development indicates an earlier period of development, which is still unattested. Bronze casting and pottery also advanced in Shang culture. The bronze was commonly used for art rather than weapons. In astronomy, the Shang astronomers saw Mars and various comets. Many musical instruments were also invented at that time.

The Shang king, in his oracular divinations, repeatedly shows concern about the "fang" groups, which represented barbarians outside of the civilized "tu" regions that made up the Shang center. In particular, the "tufang" group of the Yan Shan region is regularly mentioned as hostile to the Shang. The discovery of a -style "ge" dagger-axe at demonstrates that even at this early stage of Chinese history, there was some level of connection between the distant areas of north China.

, the last Shang king, committed after his army was defeated by the Zhou people. Legends say that his army betrayed him by joining the Zhou rebels in a decisive battle.

A classical novel "" is about the war between the Yin and Zhou, in which each was favored and supported by one group of gods.

After the Yin's collapse, the surviving Yin ruling family collectively changed their surname from their royal Zi (子) (: zi; : tzu) to the name of their fallen dynasty, Yin (殷). The family remained aristocratic and often provided needed administrative services to the succeeding Zhou Dynasty. The (周成王) through the Regent, his uncle the Duke Dan of Zhou (周公旦), enfeoffedClarifyme|date=March 2008 the former Shang King Zhou's brother the ruler of Wei, WeiZi (微子) in the former Shang capital at Shang (商) with the territory becoming the state of Song (宋). The State of Song and the royal Shang descendants maintained rites to the dead Shang kings which lasted until 286 BC. (Source: "".)

Both Korean and Chinese legends state that a disgruntled Yin prince named (箕子), who had refused to cede power to the Zhou, left China with his garrison and founded near modern day to what would become one of the early Korean states (Go-, Gija-, and Wiman-Joseon).

Many Shang clans migrated northeast and were integrated into Yan culture during the Western Zhou period. These clans maintained an elite status, continuing their sacrificial and burial traditions.

Furthermore, though the ruins of Yinxu confirms the existence of the Late Shang dynasty, no evidence has been unearthed proving the existence of the Shang dynasty before its move to its last capital. This is seen in research by the reference to Yin-era Shang as Late Shang and pre- Shang as Early Shang. The difficulty is less one of conspirators trying to legitimize the Shang Dynasty and more the problem of historians and archaeologists sorting out historical societies and pre-historic (That is, pre-writing) archeological cultures.

At the Shang Dynasty site of Ao, large walls were erected in the 15th century BC that had dimensions of 20 meters / 65 feet in width at the base and enclosed an area of some 2100 yards².

As far back as c. 1500 BC, the early Shang Dynasty engaged in large-scale production of -ware vessels and weapons.

Apart from their role as the head military commanders, Shang kings also asserted their social supremacy by acting as the high priest of society and leader of divination ceremonies. As the oracle bone texts reveal, the Shang kings were viewed as the best qualified members of society to offer sacrifices to their royal ancestors, to the high god Di, who in their beliefs was responsible for the rain, wind, and thunder.

Shang infantry were armed with a variety of stone or bronze weaponry, including "máo" spears, "yuè" pole-axes, "ge" pole-based dagger-axes, the compound bow, and bronze or leather helmets (Wang Hongyuan 1993). Their western military frontier was at the , where they fought the "ma" or "horse" barbarians, who might have used s. The Shang themselves likely only used chariots as mobile command vehicles or elite symbols. [Shaughnessy, Edward L. Historical Perspectives on The Introduction of The Chariot Into China. Harvard Journal of Asiatic Studies, Vol. 48, No. 1 (Jun., 1988), pp. 189-237] Although the Shang depended upon the military skills of their nobility, the masses of town dwelling and rural commoners provided the Shang rulers with conscript labor as well as military obligation when mobilized for ventures of defense or conquest.

The army was divided into three sections - left, right, and middle.

overeigns of the Shang Dynasty

* Timperley, Harold J. "The Awakening of China in Archaeology; Further Discoveries in Ho-Nan Province, Royal Tombs of the Shang Dynasty, Dated Traditionally from 1766 to 1122 B.C.. 1936".