The runic alphabets are a set of related s using letters known as runes to write various prior to the adoption of the and for specialized purposes thereafter. The Scandinavian variants are also known as futhark (or fuþark, derived from their first six letters of the alphabet: "F", "U", "Þ", "A", "R", and "K"); the Anglo-Saxon variant as "" (due to sound changes undergone in by the same six letters).

The earliest runic inscriptions date from around 150 AD, and the alphabet was generally replaced by the Latin alphabet with by around 700 AD in central Europe and by around 1100 AD in Scandinavia; however, the use of runes persisted for specialized purposes in Scandinavia, longest in rural until the early twentieth century (used mainly for decoration as runes in and on s).

The origins of the runic alphabet are uncertain. Many characters of the Elder Futhark bear a close resemblance to characters from the Latin alphabet. Other candidates are the 5th to 1st century BC Northern Italic alphabets: , Rhaetic and Venetic, all of which are closely related to each other and descend from the .

The runes were introduced to the Germanic peoples in the 1st or 2nd century AD. (The oldest known runic inscription dates to around 150 AD and is found on a comb discovered in the bog of Vimose, , Denmark. [Stoklund (2003:173)] The inscription reads "harja"; a disputed candidate for a 1st century inscription is on the in southern ). This period may correspond to the late or Common Germanic stage linguistically, with a continuum of dialects not yet clearly separated into the three branches of later centuries; , , and .

No distinction is made in surviving runic inscriptions between long and short vowels, although such a distinction was certainly present phonologically in the spoken languages of the time. Similarly, there are no signs for s in the Elder Futhark (such signs were introduced in both the Anglo-Saxon and the as variants of "p"; see .)

The name given to the signs, contrasting them with Latin or Greek letters, is attested on a 6th century Alammanic runestaff as "runa", and possibly as "runo" on the 4th century . The name is from a root "run-" (Gothic "runa"), meaning "secret" or "whisper" (In Finnish, the term "runo" was loaned to mean "poem").

In , the runic alphabet is attested to a divine origin (: "reginkunnr"). This is attested as early as on the from around 600 CE that reads "Runo fahi raginakundo toj [e'k] a...", meaning "I prepare the suitable divine rune ..."

In the Poetic Edda poem "" another origin is related of how the runic alphabet became known to man. The poem relates how , identified as in the introduction, sired three sons ( (slave), (freeman) and Jarl (noble)) on human women. These sons became the ancestors of the three classes of men indicated by their names. When Jarl reached an age when he began to handle weapons and show other signs of nobility, Rig returned and, having claimed him as a son, taught him the runes. In 1555, the exiled Swedish archbishop recorded a tradition that a man named had stolen three rune staffs from Odin and learned the runes and their magic. 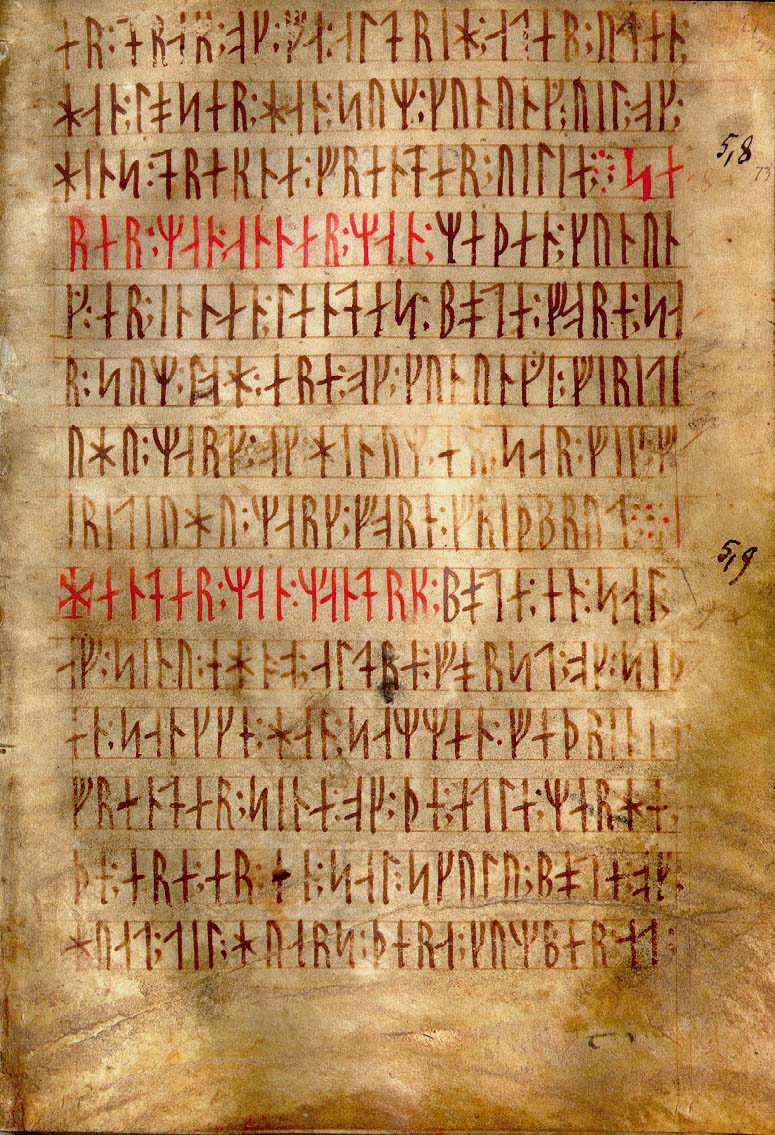 thumb|right|_, a vellum manuscript from around 1300 AD containing one of the oldest and best preserved texts of the , written entirely in runes.] The runes developed centuries after the Mediterranean alphabets from which they are potentially descended. There are some similarities to alphabets of Phoenician origin (Latin, Greek, Italic) that cannot possibly all be due to chance; an , more particularly the Raetic alphabet of , is often quoted as a candidate for the origin of the runes, with only five Elder Futhark runes ( runic|ᛖ "e", runic|ᛇ "ï", runic|ᛃ "j", runic|ᛜ "ŋ", runic|ᛈ "p") having no counterpart in the Bolzano alphabet (Mees 2000). This hypothesis is often denied by Scandinavian scholars, who usually favour a Latin origin for most or all of the runic letters (Odenstedt 1990; Williams 1996). [Cf. [http://ariadne.uio.no/runenews/odmarune.htm Oxford Dictionary of the Middle Ages (book under preparation)] ] An Old Italic or "North Etruscan" thesis is supported by the inscription on the dating to the 2nd century BC (Markey 2001). This is in a northern Etruscan alphabet, but features a Germanic name, "Harigast". New archaeological evidence came from [http://digilander.libero.it/archeocadore/page36.html Monte Calvario] (Auronzo di Cadore).

The angular shapes of the runes are shared with most contemporary alphabets of the period used for carving in wood or stone. A peculiarity of the runic alphabet as compared to the Old Italic family is rather the absence of "horizontal" strokes. Runes were commonly carved on the edge of narrow pieces of wood. The primary grooves cut spanned the whole piece vertically, against the grain of the wood: curves are difficult to make, and horizontal lines get lost among the grain of the split wood. This vertical characteristic is also shared by other alphabets, such as the early form of the used for the .

The " hypothesis" speculates on an introduction by . This hypothesis is based on claiming that the earliest inscriptions of around 200 AD, found in bogs and graves around Jutland (the ), exhibit word endings that, being interpreted by n scholars to be , are considered unresolved and having been long the subject of discussion. Inscriptions like "wagnija", "niþijo", and "harija" are supposed to incarnate tribenames, tentatively proposed to be , the and the , tribes located in the Rhineland. [Looijenga, J. H. (1997). " [http://dissertations.ub.rug.nl/faculties/arts/1997/j.h.looijenga/ Runes around the North Sea and on the Continent 150-700CE] ", dissertation, Groningen University.] Since names ending in "-io" reflect Germanicmorphology representing the Latin ending "-ius", and the suffix "-inius" was reflected by Germanic "-inio-", [Weisgerber 1968:135, 392ff. and Weisgerber 1966/67:207] the question of the problematic ending "-ijo" in masculine Proto-Norse would be resolved by assuming Roman (Rhineland) influences, while "the awkwardending -a of laguþewa (cf. Syrett 1994:44f.) can be solved by accepting the fact that the name may indeed be West Germanic;" [Looijenga, J. H. (1997). " [http://dissertations.ub.rug.nl/faculties/arts/1997/j.h.looijenga/ Runes around the North Sea and on the Continent AD 150-700] ", dissertation, Groningen University.] however, it should be noted that in the early Runic period differences between Germanic languages are generally assumed to be minute. Another theory assumes a unity preceding the emergence of Proto-Norse proper from roughly the 5th century. [Penzl (1994) assumes a period of "Proto-Nordic-Westgermanic" unity down to the 5th century and the inscription. H. Penzl, Language (1994), p. 186; in greater detail in "Englisch: Eine Sprachgeschichte nach Texten von 350 bis 1992 : vom Nordisch-Westgermanischen zum Neuenglischen" (1994); the division between Northwest Germanic and Proto-Norse is somewhat arbitrary, see Elmer H. Antonsen, "On Defining Stages in Prehistoric Germanic", Language (1965), p. 36] An alternative suggestion explaining the impossibility to classify the earliest inscriptions as either North or West Germanic is forwarded by È. A. Makaev, who assumes a "special runic ", an early "literary Germanic" employed by the entire Late Common Germanic linguistic community after the separation of Gothic (2nd to 5th centuries), while the spoken dialects may already have been more diverse. [cited after . Antonsen (1965), p. 36]

The formation of the Elder Futhark was complete by the early 5th century, with the being the first evidence of the "futhark" ordering as well as of the "p" rune.

In stanza 157 of "", the runes are attributed with the power to bring that which is dead to life. In this stanza, Odin recounts a spell:

Other scripts, reminiscent of, based on or related to runes:
*
*, the early Irish monumental alphabet
*the "", invented by
*the "runes", invented by
* and (sometimes referred to as Turkic and Hungarian runes)
* (unattested sign system postulated from medieval accounts)
*