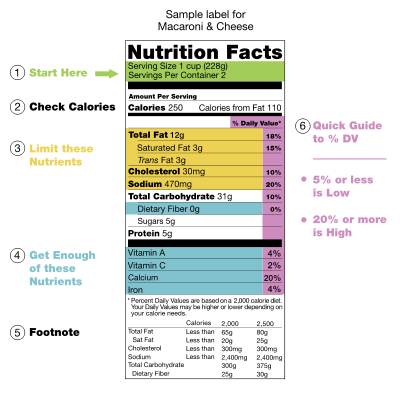 A sample nutrition facts label, with instructions from the U.S. Food and Drug Administration.[1]

The nutrition facts label (also known as the nutrition information panel, and various other slight variations) is a label required on most packaged food in many countries.

Such standardized labeling is considered distinctly from free-form marketing claims, such as: "Source of Fibre", "Soluble Fiber", "Omega3", "Excellent Source of Calcium", "No preservatives", "No artificial ... ", and so on.

Australia and New Zealand use a nutritional information panel of the following format:

In Canada, a standardized "Nutrition Facts" label was introduced as part of regulations passed in 2003, and became mandatory for most prepackaged food products on December 12, 2005. (Smaller businesses were given until December 12, 2007 to make the information available.)[2].

Canadian regulation tightly controls the manner in which the nutrition fact table (NFT) data is laid out. There is a wide variety of possible formats for use on a given food package. A selection hierarchy is used to select among the many formats (28 main formats, and 2-7 sub formats for each). This results in standard (vertical) formats being considered for use before horizontal and linear formats. The selection hierarchy also allows the NFT to occupy no more than 15% of the physical package's available display area (ADS), but never to be smaller than a format that would be <=15% of ADS. In practice, determining the ADS of a package, and selecting the appropriate NFT format, can be a detailed calculation.

It is regulated by the Commission Directive 2008/100/EC of 28 October 2008 amending Council Directive 90/496/EEC on nutrition labelling for foodstuffs as regards recommended daily allowances, energy conversion factors and definitions.[2]

In the European Union, the information (usually in panel format) is most often labeled "Nutrition Information" (or equivalent in other EU languages). The panel is optional, but if provided, the prescribed content and format must be followed. It will always give values for a set quantity — usually 100 g (3.5 oz) or 100 ml (3.5 imp fl oz; 3.4 US fl oz) of the product — and often also for a defined "serving". First will come the energy values, in both kilocalories and kilojoules.

For most foods, there are no specific legal definitions of terms such as "low fat" or "high fibre", although spreadable fats (e.g. butter and margarine) do have statutory requirements for the quantity of fat they contain. However, terms such as "reduced calorie" may not be used unless they can be shown to be considerably lower in calories than the "usual" version of the product.

Provided the full nutrition information is shown on the packet, additional nutritional information and formats (e.g. a traffic light rating system) may be included and this falls outside the scope of regulation.

The United Kingdom regulations are given in Schedules 6 and 7 of the Food Labelling Regulations 1996.[3]

The Ministry of Health and Family Welfare had, on September 19, 2008, notified the Prevention of Food Adulteration (5th Amendment) Rules, 2008, mandating packaged food manufacturers to declare on their product labels nutritional information and a mark from the I.S.O, F.P.O and/or Agmark (Companies that are responsible for checking food products) to enable consumers make informed choices while purchasing.[4] Prior to this amendment, disclosure of nutritional information was largely voluntary though many large manufacturers tend to adopt the international practice.[5]

Food products sold in Mexico use the NOM-051-SCFI-1994 "Información nutrimental" product labelling standard (which is very similar to "Nutrition Facts" in the U.S.). The Official Mexican Standard, or NOM (Norma Oficial Mexicana), was developed by the Mexican Secretary of Commerce and Industrial Promotion (Secretaría de Comercio y Fomento Industrial, or SCFI), now a part of the Secretary of the Economy (SECOFI). It entered into effect on January 24, 1996,[6] and defines "General specifications for labelling foods and pre-bottled non-alcoholic beverages".[7]

In the United States, the Nutritional Facts label lists the percentage supplied that is recommended to be met, or to be limited, in one day of human nutrients based on a daily diet of 2,000 calories (kcal).

With certain exceptions, such as foods meant for babies, the following Daily Values are used.[8] These are called Reference Daily Intake (RDI) values and were originally based on the highest 1968 Recommended Dietary Allowances (RDA) for each nutrient in order to assure that the needs of all age and sex combinations were met.[9] These are older than the current Recommended Dietary Allowances of the Dietary Reference Intake. For vitamin C, vitamin D, vitamin E, vitamin K, calcium, phosphorus, magnesium, and manganese, the current maximum RDAs (over age and sex) are up to 50% higher than the Daily Values used in labeling, whereas for other nutrients the estimated maximal needs have gone down. As of October 2010, the only micronutrients which are required to be included on all labels are vitamin A, vitamin C, calcium, and iron.[10] To determine the nutrient levels in the foods, companies may develop or use databases, and these may be submitted voluntarily to the U.S. Food and Drug Administration for review.[11]

In certain cases this label is not yet required by law, so a list of ingredients should be present instead. Ingredients are listed in order from highest to lowest quantity, according to their weight.

The label was mandated for most food products under the provisions of the 1990 Nutrition Labeling and Education Act (NLEA), per the recommendations of the U.S. Food and Drug Administration[3]. It was one of several controversial actions taken during the tenure of FDA Commissioner Dr. David Kessler. The law required food companies to begin using the new food label on packaged foods beginning May 8, 1994. (Meat and poultry products were not covered by NLEA, though the U.S. Department of Agriculture proposed similar regulations for voluntary labeling of raw meat and poultry.[12]) Foods labeled before that day could use the old label. This appeared on all products in 1995. The old label was titled "Nutrition Information Per Serving" or simply, "Nutrition Information".

The label begins with a standard serving measurement, calories are listed second, and then following is a breakdown of the constituent elements. Always listed are total fat, sodium, carbohydrates and protein; the other nutrients usually shown may be suppressed if they are zero. Usually all 15 nutrients are shown: calories, calories from fat, fat, saturated fat, trans fat, cholesterol, sodium, carbohydrates, dietary fiber, sugars, protein, vitamin A, vitamin C, calcium, and iron.

Products containing less than 5 g of fat show amounts rounded to the nearest 0.5 g. Amounts less than 0.5 g are rounded to 0 g. For example, if a product contains 0.45 g of trans fat per serving, and the package contains 18 servings, the label would show 0 g of trans fat, even though the product actually contains a total of 8.1 g of trans fat.

In addition to the nutrition label, products may display certain nutrition information or health claims on packaging. These claims are not necessarily regulated and do not have to adhere to industry standards. The Institute of Medicine recommended these labels contain the most useful nutritional information for consumers: saturated fats, trans fats, sodium, calories, and serving size.[13] In January 2011, food manufacturers and grocery stores announced plans to display some of this nutrition information on processed food.[14]

The FDA does not require any specific typeface be used in the Nutrition Facts label, mandating only that the label "utilize a single easy-to-read type style",[16] though its example label uses Helvetica.[17]

In 2009, a federal appellate court rejected the New York State Restaurant Association’s challenge to the city’s 2007 regulation requiring most major fast-food and chain restaurants to prominently display calorie information on their menus. The rule applies to restaurants that are part of chains with at least 15 establishments doing business nationally.[18]